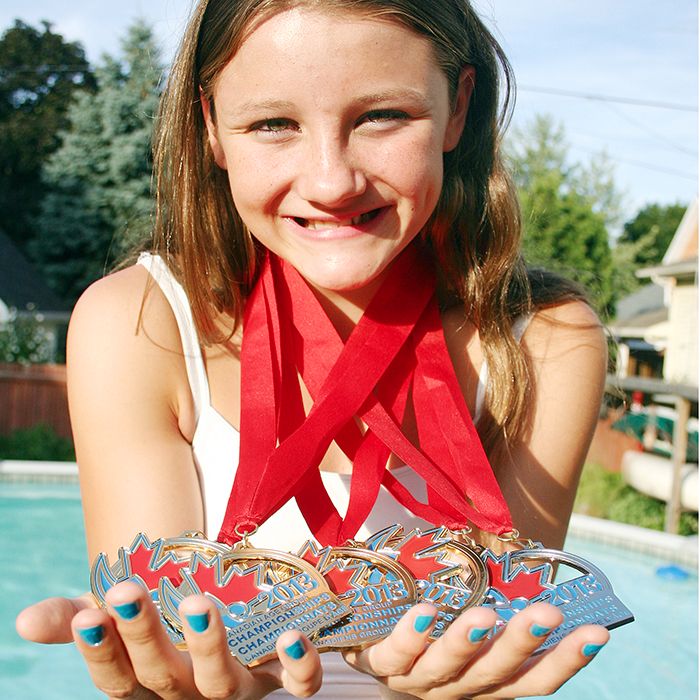 Madison Broad was treated with a hero’s welcome on July 29,when she returned home to Wallaceburg as a national champion.

After racking up four gold medals and one silver at the Canadian age group nationals in Montreal, the 12-year-old swimmer spotted the huge banner hanging on the fence at her home made by her friends and family.

Broad, who swims for the Chatham Y Pool Sharks, said she worked hard year-round to prepare for the Quebec competition.

At the competition, which featured swimmers from all across Canada, Broad said she was feeling some jitters before jumping in the pool each time.

The pool was outdoors, so the elements came into effect for some of her races.

“The first day and the last were the most awful,” she said. “The first day was freezing and then got warmer … it was tough doing the backstroke with the sun in your eyes. It rained on the last day; it poured so hard.”

Going into nationals, Broad said she “was hoping for three or four medals.

“But I got five,” she said with a smile.

Broad finally got the chance to relax and enjoy summer vacation when they got back July 29, as much of her summer vacation to this point was spent preparing for nationals.

“It feels awesome, but I want to keep swimming,” she said. “It’s fun.”

Broad is already committed to participating in the same competition next year, which is being held in Winnipeg. The eastern competition takes place in Windsor in February.

Leading up to next year’s nationals, Broad said she is hoping to hit the gym more.

“I want to start doing some more exercising,” she said. “I’m going to go to the Y on my own time and spend an hour three days a week (on top of the two hours a day in the pool.)”

Broad, who will turn 13 in September, will be entering Grade 8 at Holy Family Catholic School in Wallaceburg.