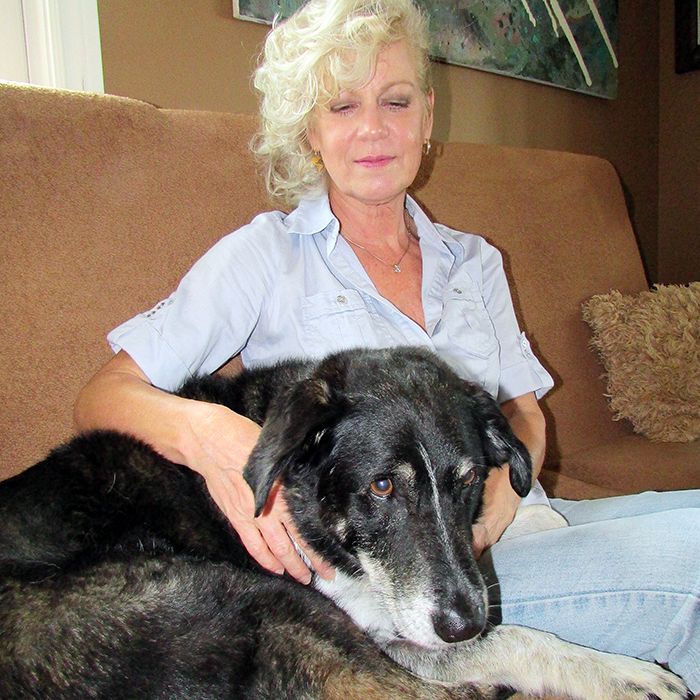 For a creature that is smaller than half a centimetre, the deer tick is causing a big concern for one area woman.

Chatham resident Carmen McCauley wants to spare pet owners the heartbreak and huge vet bills that can come from a diagnosis of Lyme disease. Her much-loved dog, Deeder is currently battling kidney failure after contracting the disease from a tick bite.

Deeder, a nine-year-old Border Collie mix, is one of two dogs and four cats owned by McCauley. Unsure of when her dog was infected by the disease, McCauley said she got the news after taking her dog in for a checkup.

“There are no symptoms in dogs for Lyme disease; not until it’s too late,” McCauley explained. “Just by accident, we caught it from a routine blood test.”

The veterinarian at Bright’s Grove Animal Hospital treating Deeder immediately put her on a 28-day course of antibiotics, but 14 days in, McCauley said her worst fears came true. The damage from the disease took its toll on the dog’s immune system and his kidneys failed.

According to a Public Health Agency of Canada fact sheet, Lyme disease is caused by the bacteria Borrelia burgdorferi, which in Ontario, is transmitted to people and animals by the bite from infected blacklegged ticks, also known as deer ticks. The ticks that carry the bacteria get it from feeding on an infected rodent or deer, and in turn, can spread the bacteria to humans and animals. Symptoms can take weeks to months to appear after exposure.

Chatham veterinarian Dr. Michael Fife confirmed the incidents of Lyme disease in dogs in southern Ontario are on the rise.

“Definitely, we are seeing an increase in tick-related incidents this year,” Dr. Fife said. “I have seen five or six positives this year where last year there were only two, and the year isn’t even over yet.”

In discussion with an area entomologist, Dr. Fife said there has been a study on the increase of parasites from here to the Wiarton area and with warming temperatures; there has been no significant kill off in the winter months to control the population. He said even in winter months, people must be vigilant.

“I don’t like to pick on Rondeau because I love it there, but friends of ours were there in January and picked up ticks,” Dr. Fife said. “We all need to be much more aware of the problem and on top of prevention methods for us and our pets.”

Prevention methods such as collars or shampoos can help, but a major drawback is that they are toxic to cats and Dr. Fife said if ingested, can be fatal to felines. He said pet owners should have a serious conversation with their vet about vaccines and tick prevention methods, particularly if your dog spends time in potential tick hotspots.

“At first I admit I was skeptical about prevention companies and what they were promoting, but believe it,” he said. “People should use products year round. It’s not a new problem and it’s getting worse.”

What McCauley said pet owners should be aware that ticks aren’t just in known hotspots, such as wooded areas and Dr. Fife agreed. Ticks that carry Lyme disease have increasingly been found in urban areas where there are long grasses. It is believed ticks are being introduced to cities by migratory birds so they are being found in areas not previously thought of as “problem” areas for ticks, Dr. Fife added.

“I walk my dogs all over Chatham; by Mud Creek and through the dog park,” McCauley added. “People need to know ticks are everywhere. I would have taken my dogs in twice a year for (blood) tests if I had known.”

McCauley had Deeder’s twin tested and Paco Loco was negative for Lyme disease. She now goes over each dog to ensure they have no ticks on them when they come in from a walk. Her advice is to run your hands over your dog from nose to tail and if you feel anything that is similar to a polyp, look closely to see if it is a tick.

According to advice from her vet, McCauley said it is important to not squeeze or crush the tick when removing it because the bacteria can be released. Grasp the tick’s head and mouth parts as close to the skin as possible and slowly pull straight out until the tick is removed. She uses a special tick remover she purchased from her vet for the job.

Deeder, currently, is off her intravenous drip, but the damage to her kidneys has been done and is irreversible. McCauley said Deeder has to follow a special protein-free, high fat diet and it is a labour of love every day to encourage the dog to eat and get exercise.

“The vet is optimistic and I hope that Deeder can make it through,” McCauley said. “Her kidneys are bad but they aren’t toast yet.”

There are some important precautions to take for pet owners, no matter where you live. Here is what is recommended:

More information on how to protect your family and pets from Lyme disease can be found on-line on the Public Health Agency of Canada web site at www.phac-aspc.gc.ca or by contacting your family doctor or vet.