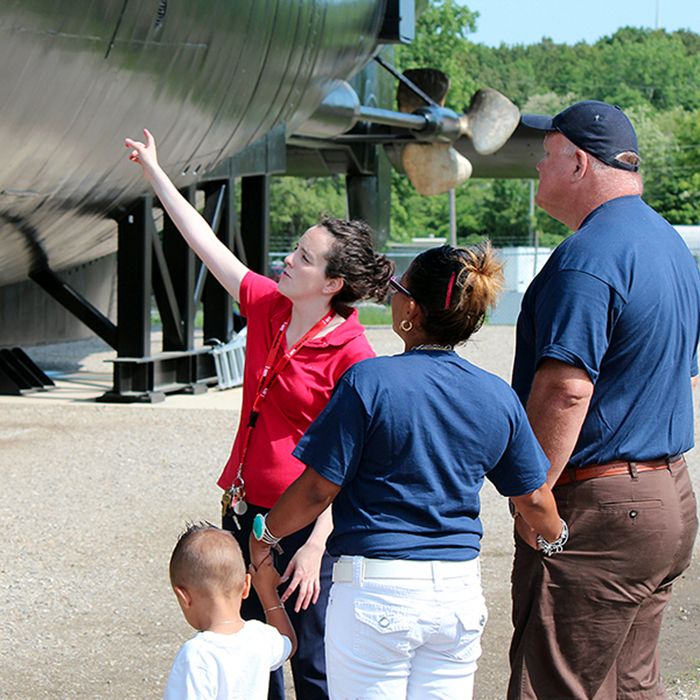 Ask most young women about their dream job, and chances are very few, if any, would list working in a tight space that smells of diesel fuel.

And then there’s Amber Laurie.

The 25-year-old Chatham native regularly has to navigate around machinery that’s almost a half-century old, much of which hasn’t been used in 15 years.

And she couldn’t be happier.

“Not everyone can say they go to work on a submarine every day,” Laurie said.

She’s the exhibit tour co-ordinator for Project Ojibwa, the decommissioned Canadian submarine on display at Port Burwell, east of London.

Navigating around the Ojibwa has its hazards.

“I recently got grease stains on my coat from the torpedo tubes,” she said. “The diesel smell is still on board.”

But to her, the grit and the smells bring back memories of talking to submariners, an important element of her research while designing the tours for the Oberon-class submarine.

“The Cold War isn’t taught until Grade 10 in Canadian history, and often it’s barely touched upon,” she said. “The submariners that served on the Ojibwa never knew if they were coming home. We help people understand the kind of life they lived.”

The stories Laurie heard while doing her research remain fresh in her mind, including tales of the stress of running ultra-quiet, which happened when tracking an unknown sonar contact or when close to Soviet-friendly territory. Switching over to red lighting isn’t for Hollywood-style dramatics.

“The white bulbs hum,” Laurie said, adding the change in on-board lighting was one small alteration to procedures. “The ventilation shut down. Plus, if submariners weren’t on duty, they had to lie in their bunks. They weren’t even allowed to sleep in case they snored.”

While interviewing the veteran submariners, Laurie said the longest ultra-quiet period she came across was 36 hours.

Imagine going without sleep, limiting your movements and barely speaking for a day and a half. Then add about 75 other people to a closely confined area with the same restrictions.

“A submariner once told us that if you lock yourself in your bedroom with 70 of your best friends for the weekend, by the time they unlock the door on Monday, someone’s going to need help. But that’s how it was like living on a submarine.”

“We got exceptionally lucky with the team we brought in. It’s a team effort,” he said. “Amber has been a very key part.”

Laurie’s been on the job since last November, about two weeks before the submarine arrived.

“I designed the tours; I interviewed a lot of submariners,” she said of the process.

Raven said her work has been “tremendous.”

And now Laurie’s in charge of overseeing 28 tour guides and ensuring everything runs on time.

Raven said the tours show about 100 visitors a day through the sub right now.

The job is right in Laurie’s skill set. She took history and anthropology at Waterloo’s Wilfred Laurier University, and followed up with museum studies at Sir Sanford Fleming College in Peterborough.

As for the Ojibwa, it spent 14 years moored in Halifax harbour, waiting to be cut up into scrap metal. But about four years ago, the effort began to transfer it to Port Burwell.

In late May of 2012, the sub began its slow journey from Halifax to Port Burwell. The Ojibwa spent the summer and part of the fall in Halifax, where it received modifications that would allow it to be pulled off its transport barge and onto the shore. The transfer in Port Burwell took place in November.

Raven said the business plan for Project Ojibwa is to close down the exhibit for the winter nearly a year after the sub’s arrival. That is, unless public interest is high enough to keep it open longer.

“That will give us the opportunity to do more work on the vessel,” Raven explained of closing the exhibit for the winter.

When the sub is closed to visitors, Laurie will work out of the museum’s St. Thomas office.

Book a tour by calling 519-633-7641. There are currently problems with the site’s online booking service.

Cost of the tour is $11 for children aged 6-12 and $18.50 for adults. Children under age six aren’t allowed on board for safety reasons, but they can still take an exterior tour, which is free for kids 10 and under and $5 for adults.

For more information on Project Ojibwa, please visit the website at www.projectojibwa.ca.