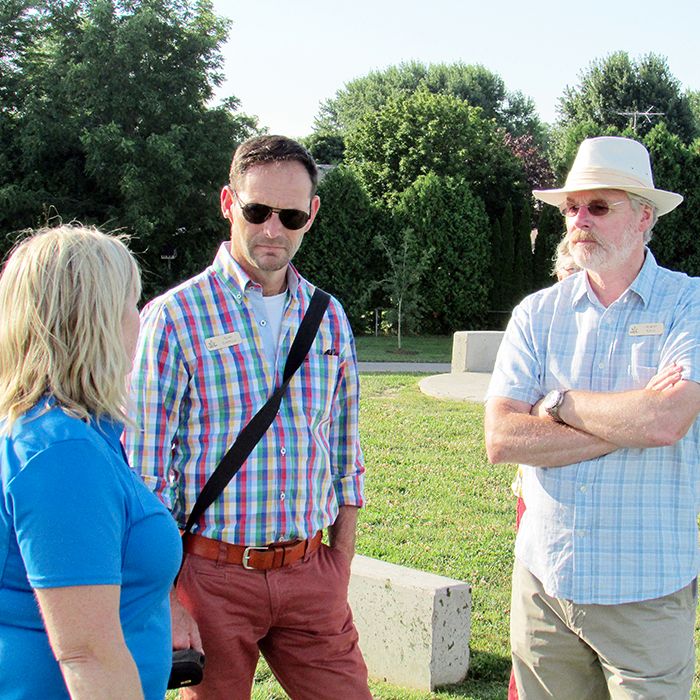 The whirlwind summer for a pair of international Communities in Bloom (CiB) judges continued first thing Friday morning in Chatham-Kent.

“We still have two in the United Kingdom to do and we were in South Korea and Italy,” Ivison said.

The Voice caught up with the CiB judges Friday morning as they toured Kingston Park. Deb Veccia, supervisor of Chatham parks, gave Ivison and Capelle a detailed tour of the splash pad and pump room that powers and filters the water for the pad, sandwiching a hilltop visit in between.

From the top of the toboggan hill, Veccia, armed with a panoramic view of most of the park, described ongoing efforts and plans for various parts of Kingston Park, including the community garden to the north, and the natural forestation envisioned for part of the west end.

Ivison was impressed with the effort made to reuse old materials at the park.

“This is a good example of reuse and recycling,” Ivison said, pointing to some of the wood used in facility construction, and to the stone paths at the west base of the main building. The stones are actually pieces of concrete that came from demolished municipal properties, including old swimming pools.

“This is very interesting. There are a lot of nice facilities here,” Ivison said of Kingston Park. “This is a credit to Chatham-Kent. I can see why it’s so popular.”

“I am very impressed with this park, especially with the splash pad,” he said. “It’s in a park setting and is just for play and for fun.”

The judges left Kingston Park to take a drive along scenic King Street West before heading on to North Buxton.