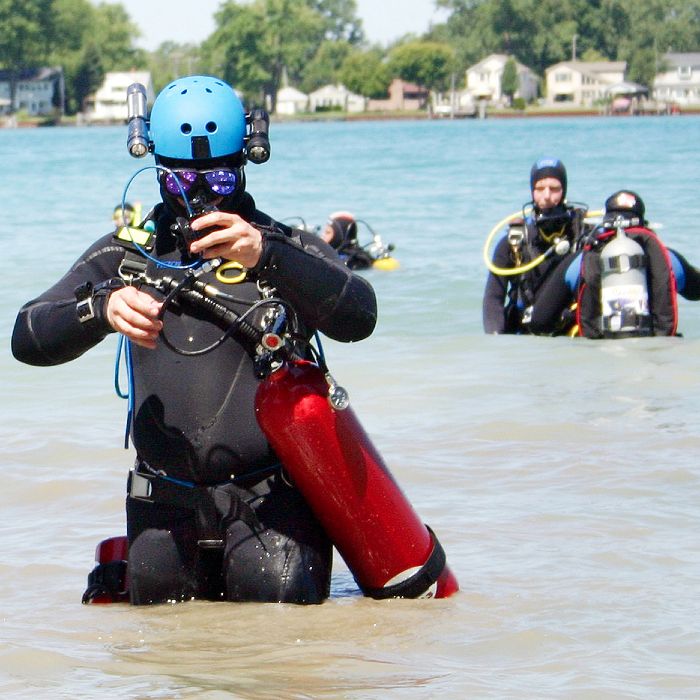 Some local divers beat the heat on Saturday, with the help of a few American friends.

Red Devil Scuba gathered in Port Lambton, along the shores of the St. Clair River. Joining the local club for the venture was a group of divers from Michigan.

“Because of Facebook and other media influences, we keep in contact with a lot of other people that we never actually meet,” he said. “We swap stories about diving in the river. Every time that I see stuff that they find over there or we see stuff that we find over here … I thought it would be neat to dive over on their side, and have them come over here. Then a lightbulb went off.”

From there, the inaugural Scuba CanUSA event was formed.

“Everybody has jumped on board,” Smith said. “All the stores over there have sent stuff over for gifts, and they brought a lot of the divers over. In a nutshell, it has turned out a lot better than I thought for the first time. Our American friends can’t wait for us to go over there next year.”

Smith said the 50-plus divers that took part in the venture would look to spot old antique bottles in the river during the dive, and other treasures on the river floor.

Patrick Draplin, a member of Third Coast Divers based out of Lambton Shores, Mich., said they rallied some of their club to come across the border.

“They have a really active dive club going on over here and we all keep in touch through Facebook,” he said. “We’re glad to be here, it’s a beautiful day for river diving and we were hoping to find a couple trinkets out there in the water.”

Draplin said taking part in scuba diving is more than just being in the water.

“It’s about the camaraderie with everything,” he said. “I’ve made a lot of very good friends over the years through diving, that probably wouldn’t have met in my conventional life through work. There is a good bond there. You learn to trust people, which is very important when you’re in the water and you’re partnered up with them; you literally trust them with your life.”

After the dive, all the participants took part in a barbecue in Port Lambton, provided by Red Devils Scuba.