When the Voice signed on as a gold sponsor for the Canada D’eh event, I thought it would be a great chance to meet a lot of people around town and take a break from our hectic pace needed to get the paper off the ground.

It was nice to see so many people at Tecumseh Park (despite the rain) but if I was looking for a relaxing ride in the parade, I was mistaken.

They say photos don’t lie and in this case they’re right. The accompanying picture pretty well shows my mindset at the start of the parade.

It was a blessing and a curse that a local community-minded citizen provided us with the use of his 1927 Bickle fire engine.

It was a blessing because it was a great way to introduce The Voice to our community and a curse because I had to drive it.

I had to bring the truck in from out of town and I waited until the last minute just in case the parade was cancelled. I thought I’d make a nice leisurely journey in but as soon as I pulled the truck onto the highway, a driving rain made it anything but. 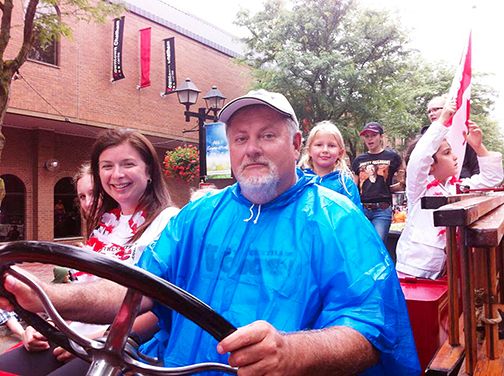 With my blue rain poncho flapping (who knew they had snaps) my red Voice logo T-shirt underneath and the rain stinging my face, I made it with minutes to spare, looking like:

• a waterlogged minor-league superman; and/or

If we’re voting, the middle option would be my choice, but alas, we’re not.

Once we lined up for the parade, the real fun started.

With a truckload of cute big and little girls waving to their friends along the route, I was all set to …stall, …stall, and …stall.

Twelve times, according to my co-pilot Fatima (she’s the one in the photo smiling and NOT driving), but I think it was only half that.

The Bickle is a beautiful machine. Although with no windshield; no automatic transmission; no turn signals; no rear view mirror; and a starter routine that included two switches, a clutch, and two more buttons on the floor, it’s a tad different from what I’m used to.

Did I mention that the throw from one gear to the next was the better part of a metre?

Clearly, this truck wasn’t built to cruise along at a walking pace.

Making things more even interesting was that we were placed behind the Shriners, those wonderful do-gooders on mini-motorcycles. Whenever they stopped to do one of their routines, visions of me plowing into them in a macabre bowling-for-Shriners scenario played in my head.

It wasn’t the kind of publicity I was looking for.

But a little way into the parade, something happened. I began to relax and laugh about the stalling. Whenever it happened, the crowd grew quiet but when I finally got the truck going again, a huge cheer went up.

It was almost a routine after a while.

The best part was when I’d see a small child along the ride, catch their eye and then crank the siren.

The smiles were priceless.

I’ve heard the adage that, “if you don’t want to look stupid, don’t get into the media.” I’ve tested it out a few times but I’ve never had so much fun doing it. And I didn’t look that bad.

OPINION: Too much anger; too little middle ground