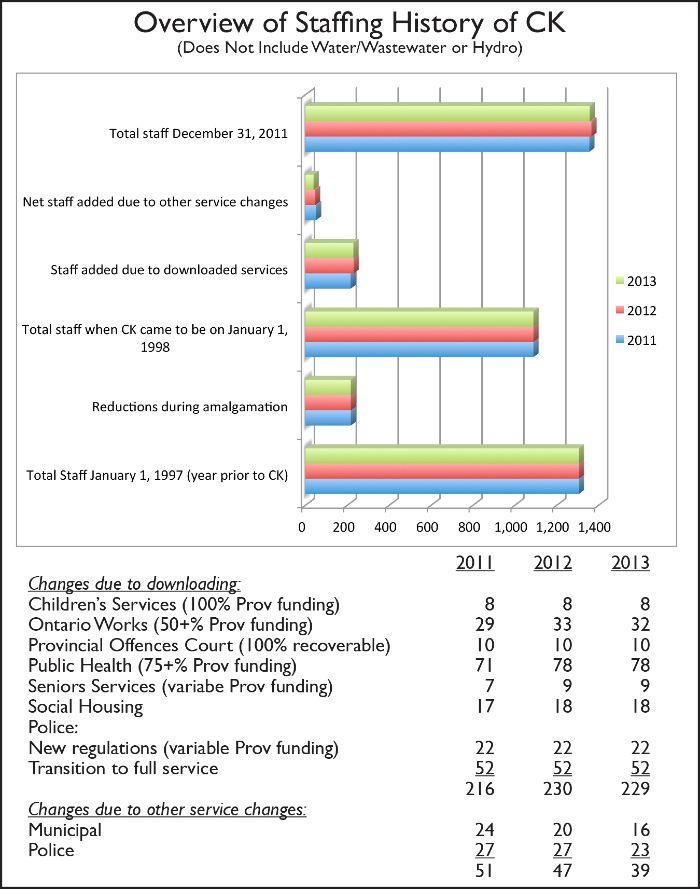 The current municipal service review has thrown a spotlight on the size and scope of local government staffing, but it’s an exercise welcomed by Chatham Kent’s Director of Human Resources & Organizational Development.

Cathy Hoffman said although it’s been 15 years since the province ordered the amalgamation of 23 cities, towns and townships to form Chatham-Kent, rumors and confusion still surround the level of municipal staffing.

“Many people would be shocked to realize that when provincial downloading is removed from the equation, we actually have fewer employees in Chatham-Kent than we did before amalgamation,” she said.

Hoffman, who was involved in making the amalgamation process work, said not many people are aware than more than 200 positions were eliminated during the transition.

Since that time, the municipality has added 299 staff members due to provincially downloaded programs, the salaries of many of whom are then subsidized. (See accompanying chart).

As of this year, Chatham-Kent has added 39 staff members due to other services and programs. “If you take our staffing level, prior to amalgamation, subtract the 217 reduction and add the 39, we are lower than we were 15 years ago.”

Hoffman said much of the confusion regarding staffing levels came from the fact that local officials were dealing not only with amalgamation but provincial downloading as well.

“We had to take 23 separate staffs, various levels of service both rural and urban and develop something which was useful, practical and affordable. That was challenging enough but provincial service downloads meant we were also suddenly responsible for a range of services municipal government had never had to deal with before, from social housing to Ontario Works.”

Hoffman said that lack of “apples to apples” comparison led to many misconceptions, one of which being that all employees were upgraded to the highest levels of salary.

“What we actually did was develop a whole new salary grid. There was no way to pick this or that category and come up with anything meaningful,” she said. “We also had a number of unionized employees and we had to deal with them in a manner which upheld their contracts.”

She said although some employees did receive raises, those increases were based on merit and responsibility.

Hoffman said the service review is taking a global approach to what the municipality does but that “mini” service reviews are an ongoing process.

“All of our staff is encouraged to constantly look for better, more efficient ways to provide service. It’s an ongoing process that they embrace.”

She said taxpayers expect the municipality to deliver important services in a thoughtful, cost-effective manner.

“There are as many opinions about service levels as there are residents but we’re mindful of the fact that whatever our community and council direct us to do must be done efficiently,” she said.

“The services we provide and the manner in which we provide them reflects on every aspect of our lives here.”