“Media is the Virus.”

“Mainstream News Media” with a circle and a line drawn through it.

“Fake News;” another sign with a circle and a line drawn through the lettering.

Yep, just some of the signs at your average Freedom whatever protest in downtown Wallaceburg on a sunny Family Day.

With everything going on in Ottawa, I thought I would stop and have a chat with protestors – to see if I could find a way across the deep divide now plaguing Canada, the nation I believe is the greatest country on Earth.

It seemed like the perfect opportunity to explore what protestors were thinking, especially on the very day the federal government was holding a vote on whether to enact the Emergency Measures Act.

I thought I would ask once again as to what exactly the people are now protesting, as vaccine passports are about to be lifted.

“Mandates,” members of the group said. They have to be gone and the people who refused the vaccines and were fired should have their jobs back, I was told.

Then there was the Justin Trudeau rhetoric.

“Not my Prime Minister,” one woman said angrily, adding he should be removed as Canada’s leader.

I said you can’t remove a democratically elected leader because that’s not how it works.

The conversation devolved from there going off in a number of tangents I won’t bore you with because you’ve probably heard them all before.

The discussion eventually swung around to the subject of false news. I explained I have been taken aback by the brazen aggression towards media; primarily what they call “legacy” or mainstream media. 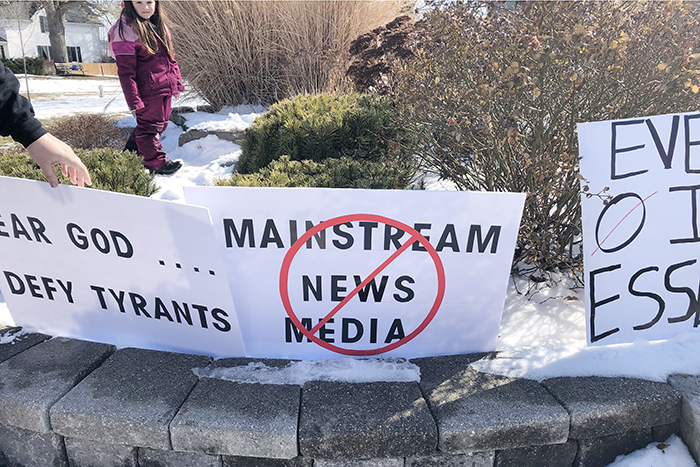 We have Donald Trump to thank for that.

Most of the people that I know working in the news biz care deeply about the truth; at least the people I know and follow in Canada.

American media, not so much. I am always freaked out when I watch the lies espoused on Fox News. Some recent coverage I saw on the Ottawa convoy was blatantly absent of facts and full of lies.

So no American news for me, thanks, except maybe National Public Radio, which is similar to our CBC Radio. When I want a different perspective beyond the ordinary, I consult international news agencies. Ironically, I often learn more from them, than I do from any of the North American outlets.

Back to the Wallaceburg fountain protest. One of the women said she was in Ottawa at the convoy protest, adding that what “legacy media” portrayed wasn’t true.

I asked her about the very public white supremacist leanings of the convoy organizers.

“Not true” she said.

I asked her about the lack of people of colour at the Ottawa protest.

Finally, I asked the woman, who was waving a Christian-themed placard around, where she gets her information.

That’s when I lost hope.

Infowars is an extreme far right American so-called news agency based in Texas.

Founder Alex Jones is a prolific disseminator of conspiracy theories, including the one where he claimed the death of 20 elementary school students in the Sandy Hook mass shooting was faked.

Jones was successfully sued for defamation in that case and while there’s lots more we can say about Infowars, that’s all the ink we are giving to this man and his deeds.

It really does make you shake your head.

Sad to say, but misinformation is now shaping policies, values and governments around the world.

It’s also creating rifts within families and companies that may never heal.

It has certainly altered the course of the COVID-19 pandemic and brought Canada to a crisis moment.

How it all ends remains to be seen, but I hope real truth and nothing but the truth will prevail.