Gail Whitney saw the benefit her father, Gerald Johnson, received from painting Christmas ornaments while in the late stages of Alzheimer’s disease.

To honour her late father, who passed away in August of 2020, and to help local Alzheimer patients, Whitney has fired up a Christmas fundraiser.

“We went through a period of time where my dad was losing his memory and his day-to-day functions. I know how difficult it can be for family members,” she said. “Painting the background of ornaments really gave my dad a purpose. I did it with him and decided to carry on and share it with the people of the Alzheimer Society.”

Last holiday season, Whitney decided to sell the ornaments, with a portion of the proceeds being donated to the Alzheimer Society of Chatham-Kent. That’s the plan again this year, but on a larger scale.

This year, members of the day program at the society have painted the background on about 200 wood disc ornaments.

“They did a lovely job. You can see the paint strokes. It gave them something to do,” Whitney said of the work.

Whitney does the rest, painting Christmas imagery to finish the ornaments.

The wood used for the disks is from the stumps of evergreens cut down at the Christmas tree farm, she said.

“We clean them up and they paint them,” she said.

Last year, it was just Whitney and her father. She said they did it in February and March of 2020, when COVID-19 was just hitting the world.

But after her father passed away, Whitney opted to grow the program.

“That’s when it became more of a fundraiser,” she said. “It’s a really nice way to remember Dad. He’d really be impressed that we’ve turned it around and put it back into the community.”

Puddleford Tree Farm is located on Scane Road near Fysh Line south of Kent Bridge. The farm will open Nov. 20 for the season and will begin selling the ornaments at that time, for $5 each.

For more information, contact Puddleford Tree Farm at 519-365-0755 or at puddlefordtreefarm@gmail.com. 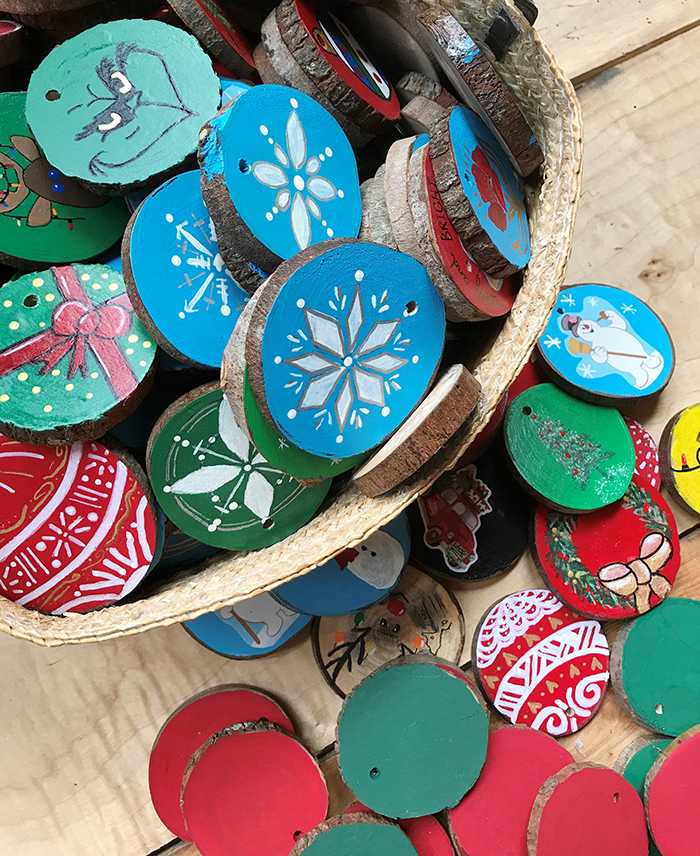