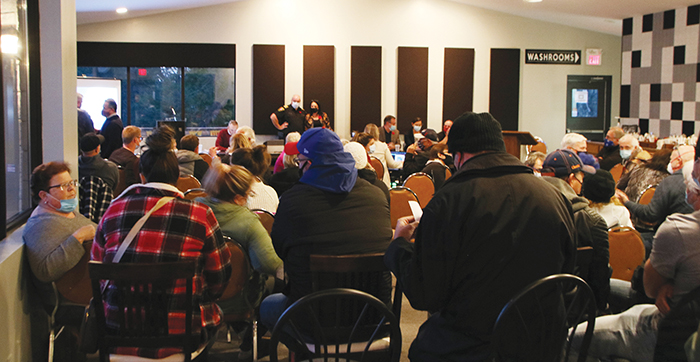 About 150 people attended the Talbot Trail Golf Course to meet with government officials in the meeting organized by the Active Citizens of Wheatley group.

Lauren Anderson, who has spearheaded community fundraising and relief efforts from the get-go, moderated the event, which gave displaced residents and concerned citizens a chance to ask questions and vent frustration.

Anderson opened the meeting by discussing community support, and how the Wheatley Disaster Relief group formed a partnership with the municipality and Chatham-Kent social services.

Anderson thanked the community, adding the “community support was amazing.”
She also acknowledged Kim Grant and Erika Renwick of the Wheatley BIA for their work assisting in the crisis.

Over three months, the group has raised more than $215,000 to help those displaced by the explosion. The municipality has also spent about $2.5 million in emergency relief thus far to aid in the effort.

Barton started the meeting off with an investigation update.

She said three areas of interest have been identified, deemed Areas of Potential Environmental Concern (APEC).

“It is complicated and complex,” Barton said.

The first location – APEC 1 –  is the explosion site at the former Pogue building, where gas was first discovered on June 2.

The second location – APEC 2 – is identified as Well 000981, a decommissioned Tate well that was located with ground penetrating radar. This is in the middle of the municipal parking lot behind the Pogue.

A trench was dug and gas bubbles were noted emerging from the ground. Elevated levels of methane gas were observed and the bubbles were temporarily vented with constant monitoring ongoing.

The third area of concern is APEC 3 – where a pipe was embedded in the ground in the area. The pipe was removed and the area excavated to about nine feet in depth.

The toxic gas responsible for the explosion – hydrogen sulphide – has not been detected in APEC 2 or APEC 3, and has only been detected at APEC 1 on the four “gas event” occasions in June, July, August (explosion) and the latest in October.

Barton explained Golder and Associates have been hired to find a solution to the problem, along with other oil and gas experts.

Officials believe the gas may be originating in the APEC 2 abandoned well and is making its way beneath the Pogue building, but the pathway has not been determined.

About 50-75 feet separates the two sites.

“We need to confirm if there is a pathway between the two sites,” Barton said. “As soon as we know how, we want to mitigate and move forward.”

While Barton said she knows it’s not as fast as everyone would like, she assured the meeting everything is being examined.

The municipality has developed a plan to allow evacuees one hour to access their homes and remove items they deem necessary.

Contractors will then go in (at Chatham-Kent’s expense) and winterize the homes and close up any swimming pools that may be in the zone.

“Your home will not look quite like it did when you left it,” said Kelly. “We want you to be ready for that.”

Kelly cited rotted food, mould, broken windows and the possibility of rodents as some of the more unpleasant things that they may find.

When municipal officials finished the update, several residents got up to express their frustration and ask questions of the panel.

Questions about insurance, the investigation timeline, property values and expanding the evacuation zone were hot topics during the two-hour question period.

“The insurance company has given us the big run-around,” said one speaker.  “They are saying there is no coverage for the evacuation.”

Shropshire said that the municipality is working with the Insurance Board of Canada and all insurance companies to get those issues rectified.

Another resident — angry and upset — told the panel that the governments have had two months and still don’t have answers to the questions.

Shropshire reiterated that the Wheatley situation is the top priority of the municipality.

“I understand your frustration,” he said. “We are equally as frustrated.”

Resident Steve Ingram didn’t pull any punches at the microphone, admitting he wasn’t there to say thanks.

“Don’t look at us and say you’re frustrated,” he said. “You don’t even know what it’s like. We don’t need your thanks. We need you to get things done.”

He said the urgency that officials are showing now should have been displayed back in the beginning of the issue.

“Ask yourself why you put us in this position,” he said.

There were also concerns raised about security guards falling asleep in their cars when they should be watching for people breaching the evacuation barriers.

About 250 additional people watched the meeting on Facebook Live and were able to ask questions in the comments section.