For two decades, a group of dedicated volunteers have given up their Saturday mornings to help others.

The Saturday Breakfast started at First Presbyterian Church in Chatham on Oct. 21, 2001. Since that time, the program has served more than 110,000 meals to people in need in Chatham-Kent.

Mike Maroney, pastor at the church, said they have been very consistent over the years.

“It is amazing. Except for a few days here and there, and other than a couple of months at the start of the (COVID-19) pandemic, we have done the Saturday morning breakfasts for 20 years,” he said.

That’s more than $250,000 in food getting into the bellies of people who need a good meal over the years.

Maroney said when the program began at the beginning of the century, food costs sat at about $7,000 a year. The interest from a donation to the church is used to pay for the food.

But demand increased, and the price of food has doubled over the past two decades, Maroney said.

“We’re at least double the price of what things were. We do fundraising. People in the congregation give. We have received grants and received donations out of the blue,” he said.

Maroney said there has never been a shortage of volunteers to get the job done. Although they are currently only doing the program twice a month, in takeout format.

“It is a little more difficult to find the number of volunteers to run it smoothly. People are cautious about their health and we don’t want to stress our volunteers out,” he said. “We’ve got it down to a science, but it is still a significant amount of work.”

Making breakfast for 175 certainly does sound like a lot of work. The numbers blossomed during the pandemic.

“We were around 120 heading into the pandemic, and now we’re up to this level,” Maroney said. “I hear stories; I talk to people. Their stories are tough. People lose their jobs, have health difficulties. We’re seeing new faces…and families. Moms come asking for six or seven meals. We don’t ask for proof and we don’t want them dragging their kids out.”

The need is present and the volunteers do their best to fill that need.

Maroney singled out Bob Fletcher, co-ordinator of the breakfast program.

“We’re really thankful for Bob. He’s been the lead on this from Day One,” Maroney said. “We have a number of volunteers who have served faithfully from the very beginning.”

The volunteers recognize the people they serve are in a difficult position for a variety of reasons. No one judges.

“It’s remarkable. It’s not like we change their life,” Maroney said of the people who utilize the breakfast program. “But people are so very appreciative. This is a meal they can count on. It’s part of their budgeting. They tell us over and over, ‘We thank you for what you are doing.’”

Maroney longs for the day when they can get back to a sense of normalcy; run the program like a diner again. They had four years rotated four different menus through the Saturday meals, giving people a selection of drinks, cereals and main dishes, all in a friendly, sit-down Breakfasts were served from 9:30 a.m. to 11 a.m. by a team of 15-20 volunteers. Guest spent time socializing.

Until that time returns, Maroney said they are limited to the take-out only format. It’s what the pastor calls their “most portable meal,” one that reheats well: frittata, hash browns and apple juice.

Guests are served at a church entrance off Fifth Street, and all proper COVI-19 precautions are in effect. 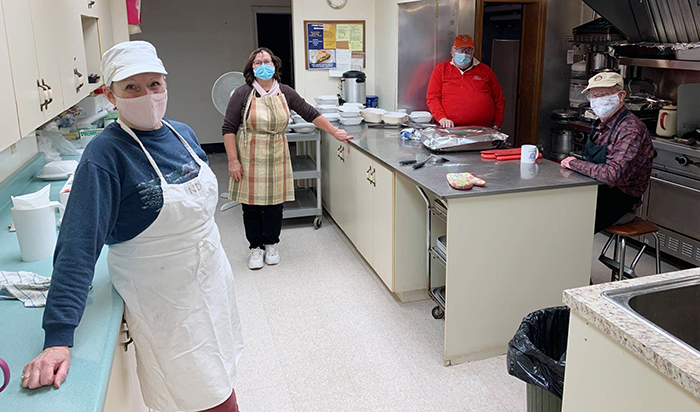