Bernier stepped out of the Cosmic Cruiser, a unique limosine, to an adoring crowd dressed in purple and white, as the Twisted Sister anthem “We’re Not Gonna Take It” blasted from the speakers.

Between 300 to 400 people turned out at the Freedom Rally, held in support of Chatham-Kent–Leamington candidate Liz Vallee.

Bernier told the cheering crowd the PPC is going to “unite Canadians under the umbrella of freedom.

He denounced the Trudeau government’s support of mandatory vaccines and vaccine passports.

Bernier’s oft repeated credo of “when tyranny becomes law, revolution becomes our duty,” was well received, even though the phrase resembles messages put forward by far right groups in the United States.

Bernier said the PPC would cut funding to provinces for the implementation of the vaccine passport, as well as cutting funding to the CBC and mainstream media.

The announcement was greeted with wild applause.

Bernier went on to say that Prime Minister Justin Trudeau and Conservative leader Erin O’Toole are the same and neither will do anything to cut the deficit or curb inflation.

Bernier worked the crowd, posed for dozens of selfies and hugged supporters before and after his speech. Prior to his speech, Bernier had a sit down meeting with a few small business owners inside the restaurant.

Vallee spoke to the gathering as well, leading the crowd in a rousing freedom chant, saying there’s no place for the “tyranny” of the vaccine passport.

“There’s no room in Canada for segregation,” Vallee told her supporters. “I am so disgusted by our government.

“This election is a referendum on the vaccine passport,” she added.

Social distancing and masking were non-existent throughout the rally’s carnival-like atmosphere, which saw many of the heavy hitters of the anti-vax, anti-mask so-called “freedom” movement take to the stage to deliver messages.

Independent MPP Randy Hillier, firebrand preacher Henry Hildebrandt and Chris VandenBos of Police on Guard for Thee were among the speakers.

The PPC’s traditional purple and white shirts were augmented by other messages. One man sported an InfoWars shirt, another’s said ‘Fire Arm Hits are Human Rights Hits, and yet another decried Bill Gates and Anthony Faucci as violators of the Nuremberg Code.

Ridgetown resident Apolonia Henderson, who was on the sidewalk waving a PPC flag, said it was her duty to show her support.

“It’s the only party that has expressed any concern about our freedoms,” Henderson said.

Several vehicles passing by the event, held at the Ultimate Sports Bar on St. Clair Street, honked in support.

There was no apparent police presence at the event, with the exception of one cruiser parked across the street. 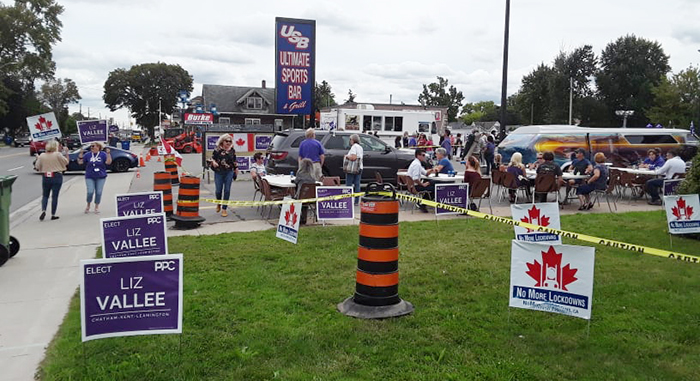