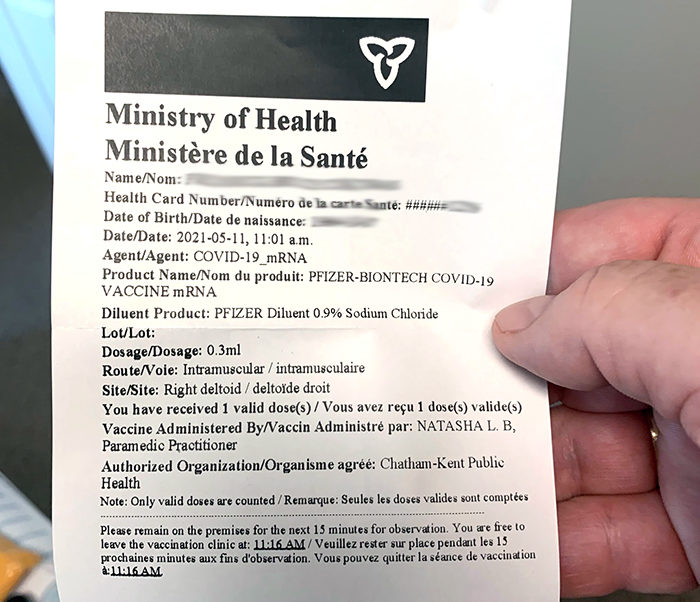 No official word has come down from the province, but it’s believed Ontario will soon be adopting a COVID-19 vaccine passport.

It’s a problem that can’t be solved locally or regionally, Colby noted, adding the federal and provincial governments need to agree on a solution.

Colby said a passport – ideally an electronic version – would not be used to deny people access to essential services, but would instead allow for privileges such as airline travel or attending indoor events.

The number of people rolling up their sleeves in Chatham-Kent has stalled, leaving the municipality a full five percentage points behind the provincial average.

It’s a disappointing turn of events for officials, considering Chatham-Kent was a national leader in vaccination rates at the outset of the immunization campaign.

Mandating vaccines as a job requirement has been incorporated by some government agencies, schools and private industries.

The Municipality of Chatham-Kent is currently examining the possibility of mandating vaccines for employees.

At the Aug. 23 meeting, North Kent Coun. Joe Faas put the motion forward that municipal staff be vaccinated but the matter was deferred to Sept. 13.

According to Faas, the issue is urgent and needs to be addressed as soon as possible.

Faas tried to have the motion voted on at the meeting but he failed to get the necessary votes from council.

Meanwhile, as of Tuesday morning, CK Public Health figures showed us with 51 active cases of COVID-19, down one from Monday. There were five new cases reported against six deemed resolved in the past 24 hours.

Eight C-K residents are in hospital due to the virus.

There was one active outbreak in a congregate living setting as well.