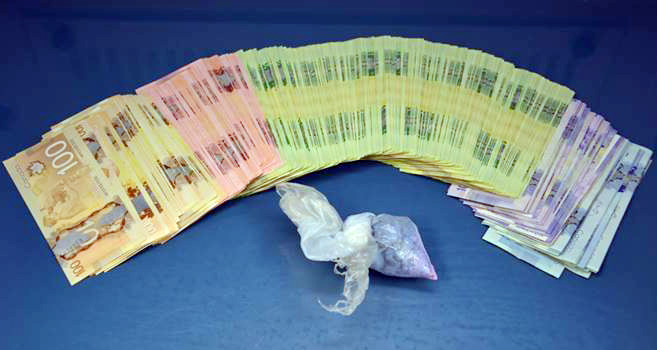 Last night, members of the Chatham-Kent Police Intelligence Section, with the assistance of the Critical Incident Response Team, executed a Controlled Drugs and Substances Act warrant at a residence on Queen Street.

Approximately $22,000 worth of suspected fentanyl along with digital scales, cell phones and large amount of Canadian cash was seized.

Shortly after 6 p.m. last night, police responded to a domestic disturbance at an apartment in Chatham.

Through investigation, police learned that a verbal argument started when the man attended the woman’s home.

This was not the first incident of domestic violence between the couple.

A 35-year-old man, of no fixed address, was arrested and charged with assault and assault causing bodily harm. He was released pending a future court date.

Around 10:30 p.m. last night, police responded to a domestic disturbance at an apartment in Chatham.

Through investigation, police learned that a verbal argument escalated into a physical altercation.

A 48-year-old Chatham man was arrested and charged with assault. He has been held in custody pending a bail hearing.

On Monday night around 9:30 p.m., three men approached an 18-year-old Chatham teen who was walking on Keil Drive in Chatham. The men assaulted the teen and stole his money, police say.

Anyone who may have witnessed the incident or has information regarding the identity of those responsible are asked to contact Const. Brent Middel at brentmid@chatham-kent.ca or 519-436-6600 ext. 87195. Anonymous callers may call Crime Stoppers at 1-800-222-TIPS (8477) and may be eligible for a cash reward.

Last night just before midnight, police responded to a disturbance between two men, known to each other, at a residence in Raleigh Township.

Through investigation, police learned that the man attended the home, regardless of being on conditions not to attend this address.

A 50-year-old Alberta man was arrested on outstanding warrants and additionally charged with failing to comply with his release conditions. He was released pending a future court date.

The homeowner, a 58-year-old man, was arrested and charged with facilitating a breach. He was released pending a future court date as well.

Shortly after 3 a.m. this morning, police responded to a collision on Churchill Park Road in Chatham, where a cab driver sideswiped a parked cab.

The taxi driver was not physical injured.

Through investigation, police suspected the man was driving while under the influence of alcohol, and a roadside breath test was administered. The man failed and was arrested.

He was transported to police headquarters for further breath tests.

A 36-year-old Chatham man is charged with having a blood-alcohol concentration exceeding the legal limit. He was released pending a future court date.