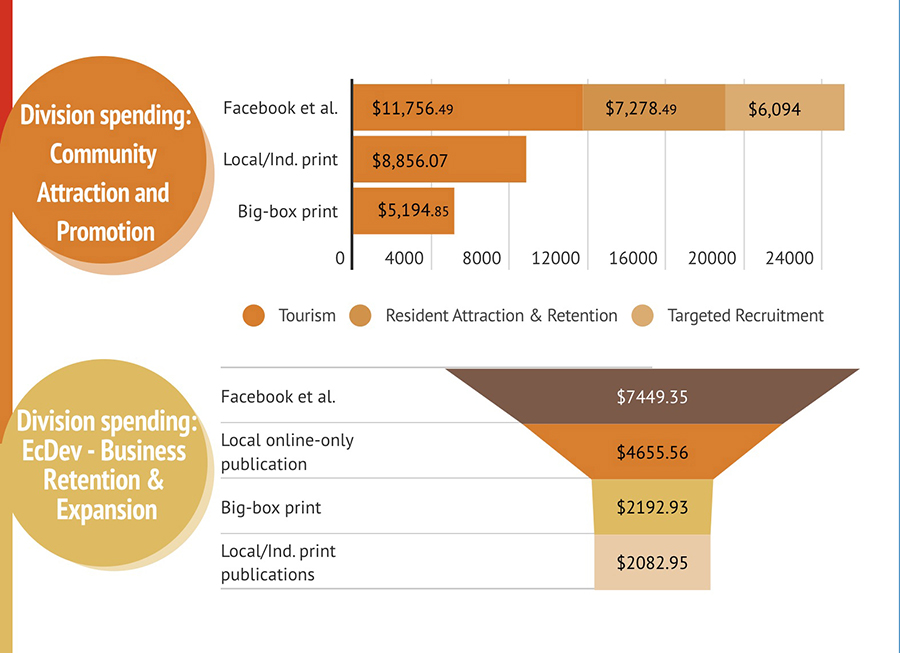 The Municipality of Chatham-Kent is not putting its money where its mouth is when it comes to supporting local.

A Freedom of Information Request revealed that during the COVID-19 pandemic, departments, such as tourism, spent a huge chunk of its ad dollars on tech titans that put zero tax dollars back into the local economy.

From March 2020 to the end of the year, Chatham-Kent’s Community Attraction and Promotion division spent $11,756 on Facebook ads for its tourism department. Municipal departments in total spent more than $35,000.

The tourism ads in particular were part of a campaign designed to encourage local residents to get out and experience Chatham-Kent in a safe manner, according to Audrey Ansell, director, Community Attraction and Promotion.

Back in September 2020, community attraction brought a report to council to support the local tourism sector through COVID.

“When we were planning out the marketing activity and the expenditures, we were very much focused on ensuring that we could reach as wide an audience as possible, reach all age demographics, which is why we went with digital, print and radio. We sought to do everything,” said Ansell.

Bruce Corcoran, general manager of The Chatham Voice, believes the municipality could have reached more by spending those Facebook dollars with local media.

“The idea that local media is not able to reach all age groups is a bit of a stretch. Our online traffic numbers, for example, show that more than 60 per cent of our online readers are between the ages of 18 and 34. And newspapers – hold-in-your-hand editions – are heavily perused by people age 35 and up,” he said.

Chatham-Kent’s four locally owned independent print publications, The Chatham Voice, Thamesville Herald, Blenheim News Tribune, and Ridgetown Independent collectively received $6,541.03 in tourism spending. The Southpoint Sun, which is owned and operated in Leamington but serves some members of Wheatley, adds an additional $2,315.04 to that total. Combined, that is still less than Facebook received from the municipality.

Ansell said 31 boosted ads on Facebook reached 1.5 million people. The population of Chatham-Kent is hovering around 104,000.

“It appears that they attempted to split it equally, however, if you’re doing a targeted marketing program, I really question why you would use Facebook which would attract people from outside the boundaries you’re looking at,” said Heather Wright, board member of the Ontario Community Newspaper Association and owner of the Thamesville Herald. “There’s no disputing that anyone who’s doing marketing right now needs to use social media. That is a way to reach people in certain target groups. But I feel like the municipality doesn’t recognize that there’s an opportunity to use, particularly local print.”

Corcoran said he thinks the municipality needs to shop local more often when it comes to its advertising.

“If the municipality showed some deserved support to local print media – which studies show almost nine in 10 Canadians read in print or online every week, and where studies also show newspapers, in print and online, as the most trusted ad source by readers – it would be placing their informational ad content where it matters most. It would also reinforce to the community that the municipality supports locally owned businesses. Buy local, shop local, inform local,” he said.

According to data from News Media Canada, 86 per cent of Canadians read a community or daily newspaper every week either in its print or digital format, a rise of one per cent since 2012. Nine out of 10 of those readers follow the news for its local content.

More than $6,000 in the tourism campaign was spent advertising on the regional radio stations, owned by Blackburn Radio Inc. out of London, while Chatham-Kent’s independent radio station, CKSX 99.1, received $2,000 less.

This year, when the pandemic hit, Postmedia closed down seven community newspapers in Ontario and eight in Manitoba. One of those hit was the Tilbury Times, which at the time was one of the longest-serving newspapers in the municipality, having opened in 1884.

The situation is not unique to Chatham-Kent and is representative of the larger issue within Canada’s media landscape, with print publications losing huge chunks of its ad revenues to companies such as Facebook and Google and being eaten up by larger companies to survive.

Out of the 50 news outlets that closed this year because of the COVID-19 pandemic, 48 were community newspapers, according to data collectable by J-Source, a Canadian journalism publication that promotes national discussion about the industry. Wright added that the OCNA recorded 25 papers in the province which closed its doors or stopped printing. The Chatham Voice was one such publication, temporarily ceasing printing between April and mid-September in 2020, and from Jan. 1 to mid-March of this year.

The Municipality of Chatham-Kent is trying to take the first steps to better aiding its locally owned independent newspapers.

At the April 12 council meeting, Chatham Coun. Karen Kirkwood-Whyte is to bring forward a motion requesting that Chatham-Kent recognize and encourage other municipal councils across Canada to acknowledge that a robust news media is “essential to the proper functioning of democracy,” to endorse legislation and regulations to “support and rejuvenate” news outlets, and to urge the federal government to move quickly to pass said legislation.

Mayor Darrin Canniff said he would like to go a step further and also support Chatham-Kent’s newspapers by putting more advertising dollars into them.

“One of my thoughts would be that we would, with all the local newspapers, have a weekly spot put in and put out general information regarding the municipality, because we can’t rely on the newspapers to put everything out free,” he said.

Wright said she would like to see the municipality go beyond just “throwing” tax dollars at a problem and to develop a “true understanding” of the barriers facing the media right now and have a more co-ordinated approach to their advertising spending.

Economic Development spent more than $7,000 for Business Retention and Expansion advertising. The four local and independent print papers received less than $2,000 combined. Stuart McFadden, director of Economic Development said the ads were to target people residing in Toronto. It was all done via social media.

The Sydenham Current, owned by the spouse of Wallaceburg Coun. Aaron Hall, received a large portion of their local spending, with more than $4,500. Hall has said that, prior to being on council, the online publication did business with the municipality and that he no longer is associated with its production or advertising.

Municipal Library Services told The Herald it had no advertising budget to spend. Yet the department used $764.52 on social media.

“We’ll see something that (municipal departments) posted on social media and we will approach them, but finding the right person to approach is often difficult because there’s no centralized person who says, yes or no to advertising,” Wright said.

Meanwhile, the residents in rural Chatham-Kent – who are still receiving paper packages from the school board for at-home-learning because they do not have reliable Internet – will likely not see those messages.

Legally, municipalities must advertise public notices (i.e. public tenders) into their local papers, a source of revenue for the independents. Wright said the Association of Ontario Municipalities (AMO) is currently pushing to change legislation so they can make their public notices via social media only.

“If Chatham-Kent is serious about supporting local media, they will oppose that and tell the AMO to back off of that,” she said.