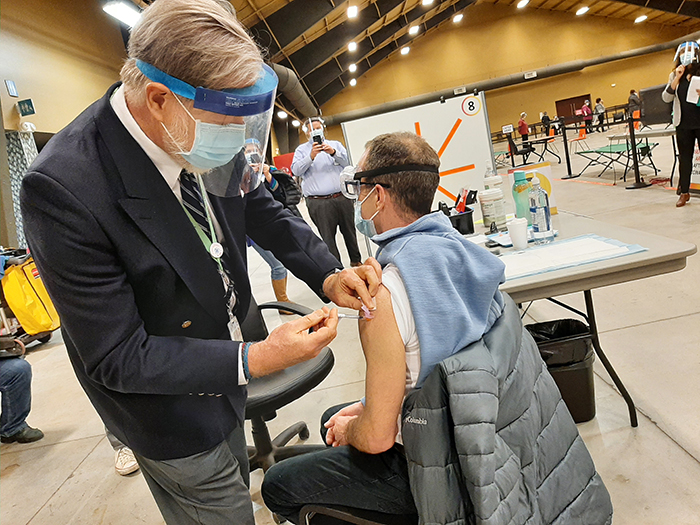 Talk of a third surge in COVID-19 cases has started as Chatham-Kent and the rest of Ontario is riding the downside of the second wave.

However, Chatham-Kent’s medical officer of health is optimistic that the vaccine will help flatten the curve although it remains hard to project what the future will look like for COVID cases.

“Any kind of modelling projections in the future are very suspect because then there are all kinds of factors at play that don’t get modelled in because of the  complexity,” said Dr. David Colby.  “The best information is just from the trajectory of the way that the seven-day rolling average is occurring.”

On Thursday, CK Public Health reported no new cases of COVID-19 and no new recoveries. The active total sits at 17 cases and no local residents are hospitalized.

“I really think that widespread vaccination will have a significant impact to blunt the effect of a third wave,” Colby said. “The worrying factor are these variants, some of which seem to be more transmissible than the strain that we’ve been used to dealing with.”

Colby added that the most common variant of COVID-19 — known colloquially as the U.K. variant and scientifically as B.1.1.7 — is susceptible to the vaccine.

“ So I think we need to, moving forward, push ahead with our vaccination program and get as many people vaccinated as we possibly can.”

On Friday all long-term care and high-risk retirement home residents in Chatham-Kent who are not currently infected with the virus are expected to receive their second doses of the Moderna vaccine. The Indigenous Elder Care Center at Moraviantown will also complete its booster shots after CK Public Health provided its health centre with vaccines.

Colby said the medical community agrees that people can go up to 45 days between their first and second doses of the vaccine but that timeframe was shortened for seniors.

“The Ontario government does not want to go out that far with the elderly population,” he said. “For the elderly, who do not have as robust an immune response, they’re going to stick to the labelling.”

Moderna states its a second shot should be administered after 28 days while Pfizer said its second dose should be received after 21 days.

Approximately 700 people were slated to be vaccinated since its opening day on Tuesday. On Wednesday morning Public Health officials stated just under 400 doses were administered.  Colby said final numbers for Thursday were still being tabulated.

To date, Fairfield Park in Wallaceburg remains with only one resident who has an active COVID-19 case.

It is also the only institution in Chatham-Kent that remains in outbreak status.

On Jan. 29 its Medicine A/B Unit was declared to be in a COVID outbreak. A total of 24 patients and/or staff tested positive.

Marshall said visitor restrictions remain in place, and only one designated care partner is permitted for the majority of inpatients.