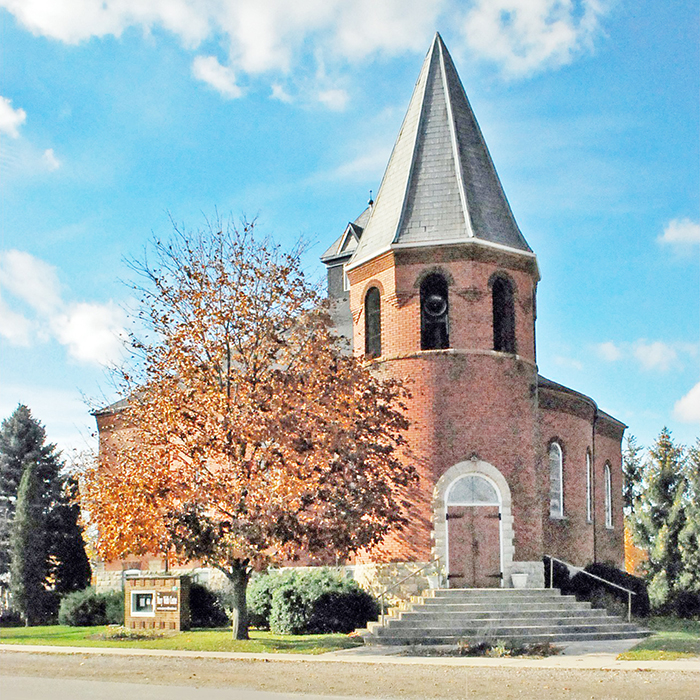 Highgate’s ‘Mission Impossible’ is heading to the finish line.

In the midst of a global pandemic, the Mary Webb Centre has announced it has only $50,000 left to hit its $1.5-million fundraising goal.

“It’s beyond belief,” says Marg Eberle, an original board member and the centre’s volunteer archivist.

“We’re pretty proud of ourselves and of the community,” she adds.

“We want to thank everyone that has helped us.”

Eberle credits “a lot” of personal donations and a variety of government grants for putting the centre’s target within striking distance.

It’s been a tough year for business across-the-board but non-profit agencies that depend on public patronage have been hit especially hard.

The Mary Webb Centre for the Arts — a century old round church with near perfect acoustics — has had to cancel all of its activities and concerts since last March.

Purchased in 2010 for only $5,000, Eberle says the plan was to create a performance centre, art gallery, social hub and reception hall for the community.

Originally built as a Methodist Church in 1898, the Mary Webb Centre is unique in structure. Featuring a round sanctuary it is one only two in North America constructed with a central ceiling dome and no supporting columns.

Sadly, the original building burned to the ground in 1917 but it was rebuilt in 1918 to the same plans.

In 1925 the church joined the United Church of Canada with the final service being held in 2010.

When organizers bought the building they knew they had their work cut out form them.

They faced adversity right off the hop, as one of the furnaces quit only four months after the purchase.

The upgrades were no surprise.

“We knew when we bought it we were between a rock and hard place.”

There were other considerations. Modifications had to be made to accommodate entry to the public.

Prior to renovations the building had only two tiny 8-foot square washrooms and the centre had to get special permission from Chatham-Kent to hold events.

Eberle says that when the board would run out of money, work would pause until fundraisers could collect more.

“If we ran out of money, we would have to stop,” she says, adding borrowing money was out of the question as traditional banks wouldn’t even talk to the board.

“It was next to impossible for us to get a line of credit,” Eberle notes, however she says Libro Credit Union finally stepped up to help.

In 2016, an expansive addition began which included necessary upgrades to bring the structure up to current safety codes.

Up until the pandemic put a hold on operations, the Mary Webb Centre has become a popular destination. Sold out concerts, events and the art gallery draw patrons from far and wide.

Eberle says the performers who come love the space.

Steve Page, Glass Tiger, Rant Maggie Rant and the Good Lovelies are among the many performers to take to the stage at the centre.

But for now the doors remain closed. However, Eberle can be found at the centre every Thursday afternoon cataloguing the many books and records of East Kent’s history.

While proud of the many accomplishments made by the board and volunteers over the years, Eberle says there’s still a lot to do.

“We are looking forward to the day when we can again welcome the public,” she says.

Eberle says the board is grateful to a host of patrons and organizations for their generosity and she’s reluctant to single anyone out.

However she says Howard Mutual Insurance and the Trillium Foundation were big players in the centre’s restoration.