Some stories all but write themselves, while others are hard to type.

This one, however, is a lot of both.

This is about Chatham’s Ryan Goulet and his family. Ryan – “Gouch” to his friends – has an aggressive form of ALS.

What the family is dealing with is truly tragic. How the community has responded, however, is incredible.

Ryan, familiar to many in the athletic circles of Chatham-Kent as a longtime Chatham Maroon Oldtimer, went from having weakness in his left arm in March to now having to use a scooter to get around, and having trouble with his speech.

ALS, you see, ravages the body, while leaving the mind intact, trapped inside.

The man his wife once called “Superman” was suddenly in need of assistance.

“He went from playing hockey five times a week skating on the ice to having a hard time just climbing the stairs and walking,” his wife, Margaret, said.

First, one friend stepped up to start a GoFundMe page. Then another asked around to see if he could find a deal on a home renovation project to convert the family’s main-floor living room into a bedroom, and add a bathroom.

This is Chatham-Kent. This community responds to need in a big way.

In no time, Quentin Sprik’s GoFundMe effort on the Goulets’ behalf topped $35,000 and counting.

As for Matt Herder’s effort to seek out someone to do the renovations at a discount, how does 100-per-cent discount sound?

Herder said he went to his “encyclopedia of fundraising,” Greg Hetherington, for advice. The owner of CKXS connected him with Blenheim-based HandyBros Climate Care, a company whose owners, Mitch and Nic White are giving back to the community through their HandyBros Heroes effort.

The concept, which started in September, sees the company accept nominations for someone who is in need of assistance, and HandyBros sees what they can do.

Mitch said as soon as he was informed of what the Goulet family was going through, he wanted to help.

“We met up with Matt, and once I heard his story from a best friend’s perspective, I felt I had to do something,” he said. “I looked at the house and thought it was something we could do.”

And then he met the family.

“The first time I met (Ryan) was a few weeks back. I feel like I’ve bonded with the family,” he said. “When I spoke with them and told them I was going to take care of them, I just knew we were doing the right thing.” 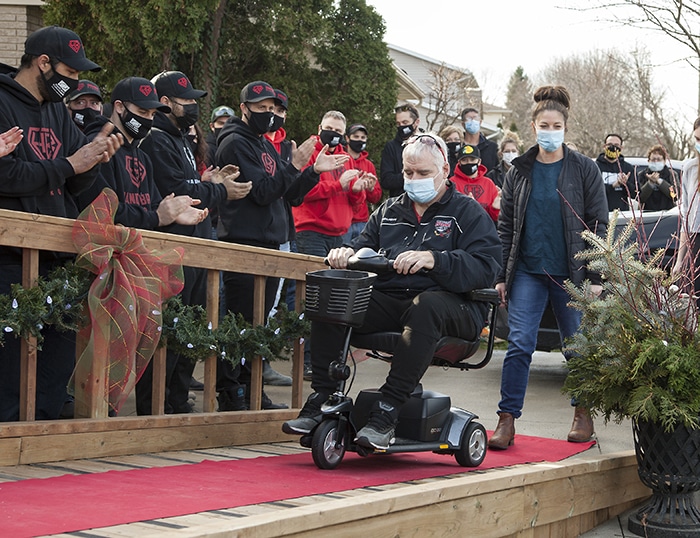 So Matt was happy knowing the labour for the renovation work was going to be covered. But HandyBros wasn’t done.

“Chatham-Kent, there’s something crazy here. Initially, we were just doing it; our guys believe in it and it bonds our people together,” he said of the project. “Then everyone jumped on it.”

“A week later, Mitch calls me up and said he has some surprises. It is 100-per-cent donated. Supplier after supplier after supplier just stepped up and donated the materials,” Matt said. “Now, all that money we raised will go towards medical bills or other needs. Whatever we can do to give him a little bit more comfort in his life, that’s worth $1 million.”

Margaret said they were floored by what happened.

“Luckily, we have friends who are like family to us. They came to us, and HandyBros said they could do the renovations for us, which is huge because it is very expensive and there are a lot of expenses with ALS because, physically, you need a lot of equipment,” she said. “Now, we are able to get a ramp for him and we can be downstairs. We really appreciate all the help to just make life a little bit easier for Ryan and our family.”

Ryan said while he and his family were put up at Holiday Inn Express and the Retro Suites for a week, HandyBros took care of the work.

“Doing this renovation in one week is amazing. We would not have been able to do this. The way ALS is hitting me, as I get weaker and weaker, I am unable to do the stairs. HandyBros has been amazing for me and my family,” he said.

Sending the family away and completing a home renovation in a tight time frame is the stuff of television. And just like a good plot twist, the renovation hit a snag. In this case, it came in the form of a specific shower unit for the new bathroom. Ultimately, Mitch drove to Ottawa and back to get the unit.

“As with every project, there are complications. You order something. There are always shipping delays. This shower unit they needed was the only one in Ontario,” he said.

Mitch said it was about to hold back the entire project, so he grabbed one of the employees, hopped in his vehicle, and headed northeast.

“It was a keystone piece. We couldn’t build certain walls until it was in place. So we went straight down and straight back,” he said of the 16-hour drive. “We had it there for noon (Nov. 26),” Mitch said.

For Margaret, learning Mitch made the trip to Ottawa and back for the shower fixture was a true indication of what kind of person he is.

“Mitch, your heart must be huge. We appreciate all you are doing for us,” she said.

On Sunday, the Goulets were treated to a reveal of the renovation project. Upwards of 150 people gathered along Tecumseh Avenue near the Goulets’ home to welcome the family back to their house.

A day later, the family received another reveal, as Matt and the poker buddies spent six weeks fixing up a rental property the Goulets own on Elizabeth Street.

“My wife, Kelly, said with a bit of sweat equity, the poker family could really do something for them,” he said. “It should fetch some good money for bills coming in the future.”

While the Goulets are still processing the support from the community and their friends, they offer advice to everyone.

“Enjoy every day and do everything,” Margaret said. “Cherish every moment because things change at the drop of a hat.”

“One thing I wanted to say to everybody out there, as a father of two kids, tell your kids you love them and show them you love them,” Ryan said, fighting through tears.

Both credit the ALS Society of Canada with offering a great deal of support.

“Until you get it, you don’t really appreciate what someone with ALS goes through. Any donation to ALS to find a cure is an amazing step forward,” Ryan said. “I hope they find a cure at some point.” 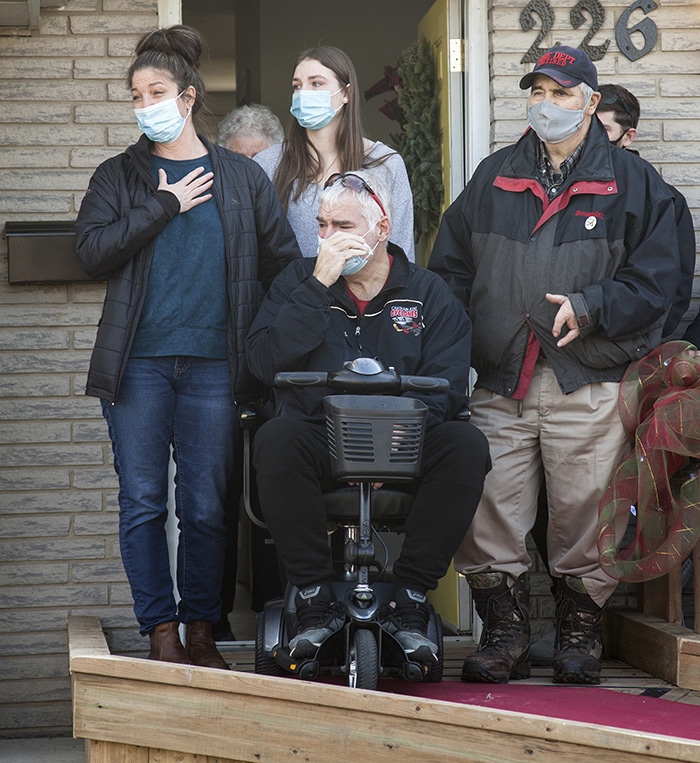