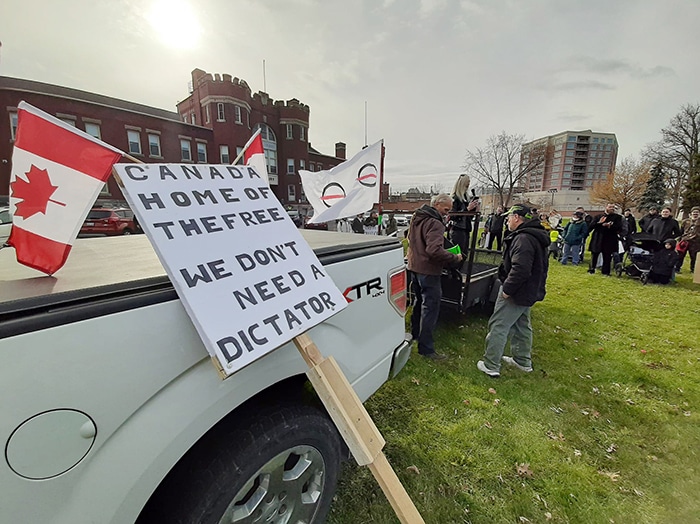 More than 100 people gathered in Chatham Saturday to oppose mandatory masks, physical COVID-19 restrictions, and to share their thoughts on the pandemic.

On Saturday afternoon, residents and individuals in surrounding municipalities such as Windsor gathered at Tecumseh Park for a rally before marching the streets of downtown Chatham.

Laura Myers, a Wallaceburg resident, was one of the organizers of the Canadians for Freedom March for Chatham. She told the crowd that masks were about control not about health safety, believing the one per cent were trying to establish a new world order.

Paul Pinsonneault, a Chatham-Kent resident who also spoke to the crowd, told the media that he believed media, governments and health professionals around the world were in on the COVID-19 pandemic, with money as the incentive.

When asked if he believes that COVID-19 was real or not, Pinsonneault responded that he believed there was “a lot of confusion and people are going to die from different things that’s not necessarily COVID.”

“It is obvious there’s a plan because it wouldn’t be happening in every country if there wasn’t,” he said.

Pinsonneault said he went to a rally of 8,000 people in Toronto, with no masks and didn’t catch COVID-19.

Pinsonneault found it suspicious that lockdown measures have never been in place before.

However, COVID-19 is the first large global pandemic since the 1918 “Spanish Flu” pandemic. SARS, Ebola, and MERS were not as easily transmitted.

When asked what the end goal was, Pinsonneault said he believed it was to make money from the vaccine.

One resident, William Webel, said he was attending to show his support for the freedom to not wear a mask. Webel, who cannot wear a mask for medical conditions, said he is mostly treated with respect when he shows up at pharmacies without the personal protective equipment.  The main issue for Webel is the fear that one freedom will be taken away after another.

When asked to elaborate he said he believes it will happen in increments, first starting with conforming to the masks and then to the lockdowns, but did not specify what the end goal would be of these “conformations.”

Some members at the march told The Voice that masks were harmful to individuals’ health and can cause death.

No deaths from wearing masks have been recorded in Chatham-Kent.

Others said there was evidence to prove that masks do not work. When asked by The Voice to cite where this information came from, no one provided an answer.

The effectiveness of masks has been backed by the Centre for Disease Control and Prevention (CDC), Health Canada, the WHO, and the Public Health Agency of Canada. 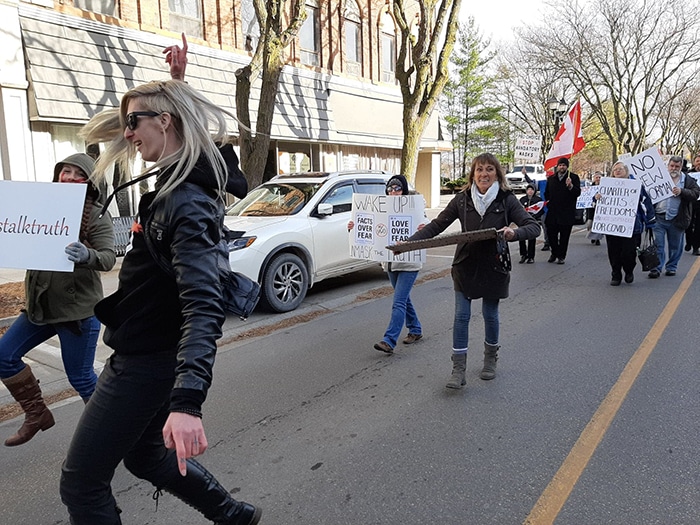