What started out as an informational summer series on the rich history of Chatham-Kent’s many cemeteries will continue in 2020.

James MacNeil of Life Transitions said their series, Respectful Recollections, began as a 17-part summer series highlighting various cemeteries in the municipality, but they quickly realized they have just scratched the surface of the history of where we place our dead to rest.

There are upwards of 70 known cemeteries or burial sites in Chatham-Kent, according to the ckcemeteries.ca website, as well as dozens of lost or unmarked burial locations.

The videos in the series are all under 10 minutes in length, are available off of Life Transition’s Facebook page, and highlight the beauty offered in Chatham-Kent’s various cemeteries, as well as a look into the history that is buried there.

Public response to the videos, MacNeil said, has been very positive.

“It seems like every single episode has generated all kinds of comments. People chime in below the video, saying ‘my grandparents are there,’ or they give their connections to the cemetery. It’s a nice way people are reminded of these places,” he said.

Time can feel like it stands still in our cemeteries; the places are so tranquil. A look around can provide a window into the past.

“Here in particular,” MacNeil said from the older portion of Maple Leaf Cemetery in a recent interview with The Chatham Voice, “the number of people connected to historical movements such as the Underground Railroad is impressive.”

Rev. William King, the founder of the Buxton Settlement, is interred there, along with his wife and other family members. Three of them are encased in above-ground all-brick burial chambers.

In terms of deep historical significance of cemeteries, MacNeil said none was more evident than what he discovered while visiting Arnold Cemetery on Longwoods Road near Louisville.

“We love other people’s stories. Jim Arnold, he’s telling us about this area and that area (within the cemetery) and all of a sudden he says, ‘Yep, I’m a ninth generation Arnold. All of my people are here,” MacNeil said. “That just rang in my ears. That’s not a modern thing. We move around so much on the planet. But for him, nine generations are buried in one spot.”
MacNeil said the historical developments of communities can be charted to some extent through burial sites.

“It’s reflected in cemeteries,” he said. “As you walk through these older areas, you see the designs of the stones, the types of stones themselves. They kind of reflect the trends and the fashions of the time. If you focus on some of the wording, there was a long period where your stone would have what you died from.”

Some of the older stones, however, are crumbling, after more than two centuries of exposure to the elements. Acid rain has been especially devastating.

MacNeil said another harsh reality of days gone by is the high child mortality rate.

“Death was just part of life. When you went into have a baby, maybe Mom doesn’t come out. Maybe the baby doesn’t survive,” MacNeil said. “Today, we’ve come so far with science and medicine that death is mostly an older person’s condition.”

MacNeil said the idea for the video series came from an infusion of youth into Life Transitions.

“We hired Wes Nelson who is growing into being our apprentice. He’s coming into the industry with fresh eyes, fresh ideas, also seeing things he’s never seen before,” MacNeil said. “He’s been with me to different cemeteries in the area and he quickly realized there are so many cemeteries in Chatham-Kent. He thought we should do a cemetery show.”

When the two began researching, MacNeil was caught off guard by the number of burial sites in the municipality.

“I was even surprised. I’ve been in the area for about 17 years. I’ve been at many, many cemeteries, but when we looked into it using the ckcemeteries.ca website, it’s unbelievable,” he said. “We thought, ‘We could do a different cemetery every single Saturday over the summer and we did that. But at the end of it, we realized all we have done is complete Season One.”

Which means a second season will arrive in 2021.

“It’s exciting to think we’re planning into next year to do Season Two of Restful Recollections, with more cemeteries, more details, and learning from what we have done to date,” MacNeil said.

For the next season and beyond, he said the plan is to follow the current format, but to seek out more people with knowledge about the cemetery being highlighted each week.

The end of each episode will remain the same.

“We always handle every episode and visit to each cemetery with the utmost respect. Even the way we film, we don’t focus on any particular stone, unless we are doing a feature on it,” MacNeil said. “We always end our segments off with a respectful tribute to all the families in any particular cemetery as a thanks for allowing us to be there. These are places for deep reverence.” 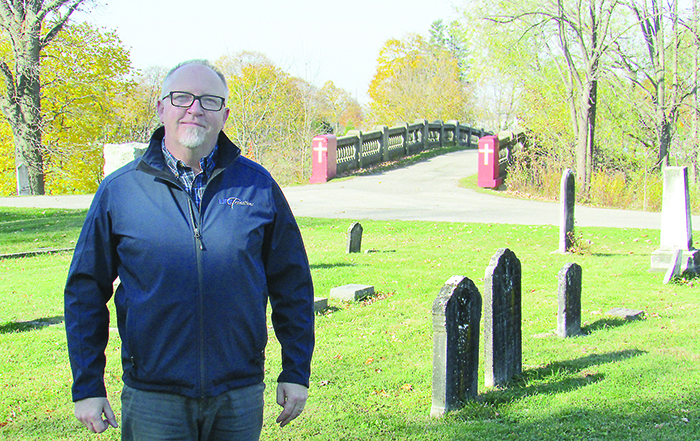