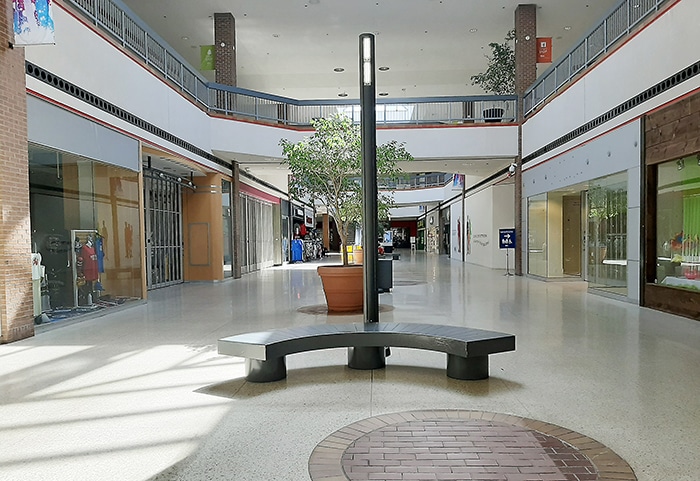 The Downtown Chatham Centre is undergoing major restructuring, from the building itself to the tenants, and a familiar face is running the show.

Lynn O’Brien has once again stepped into the role as manager, but this time on the interim. She previously ran the mall for nine years.

“What we are trying to do as a management is to clean up the exterior and make it more presentable and comfortable for people walking in downtown Chatham. And in the interior, working on things like expansion of tenants,” she said.

O’Brien is approaching the revamping with a very open mind and is hoping to take direction from the community.

“I will go to great lengths to show prospective tenants what the people of Chatham-Kent want,” she said.

The DCC has been around 1986 and over the past several years, revitalization efforts have been underway.

“We were just saying it’s like a ghost town in here,” said mom Julie Dyer as she was shopping with her daughter Lila recently. “We just moved here from a small town and definitely thought it would be nicer.”

Lila, 10, was hoping to have a girls’ day with her mom and was disappointed that there was not much variety for toy stores or a hair salon.

“It’s so depressing in here,” they said, to which Lila suggested that there should be Christmas lights all year round.

Dyer, who comes from a small town, hopes that if there is an increase in clothing stores that more local shop owners will also be featured.

“It’s nice to have a variety of options and also the opportunity to support local,” Dyer said.

The property is still in the hands of Touchstone Group LTD, and has not changed ownership. The Toronto-based company bought the shopping mall from the Warrener family in 2016.

“We (the former management) were not here for three years. So I have been brought back to make recommendations  on what should be done and could be done,” O’Brien said. “I came back because I care. I want downtown Chatham to be vibrant again.“

O’Brien has been back in her position for only four weeks, so it is still too early to tell what her vision will be. She suspects she will have more concrete plans in the next month or two.

“We just got back into it so it’s a little bit cleaner and neater. We still have a long way to go but you can only go up.”

Although O’Brien wants to hear from the entire community, she is especially looking forward to hearing from Chatham-Kent’s youth. Even shopper Maria Dasneves, a shopper in her 70s, and her husband agreed.

“There’s definitely not enough stores, we can all agree,” Dasneves said. “We need more, especially for young people, not just old people. They are the ones that go out and about to buy a lot of things.”

According to O’Brien, there are 18 tenants left for a mall that can house approximately 45 different businesses.

Fifteen-year-old shoppers Qarla Sorensen and Maxwell Sinclair and other DCC goers agreed that the expansion of the food court, which currently has less than five options, is in need of a major upgrade as it is a huge part of spending the day at the mall.

“We used to make a day of it and come here more often to sit and eat,” Sorensen said. “I’ll definitely be going to The Digital Bean (a coffee shop which recently opened its doors). If there were more places like that I would come here to study all the time.”

The teens also said they missed places like Jurassic Fantastic which closed down, and spaces where young kids can just hang out or gather in large groups. The bookstore was also sorely missed.

O’Brien said she will do everything in her power to show potential tenants what exactly it is Chatham-Kent residents want and how they can help fulfill that role. She is encouraging all residents with ideas to call her personally at the office. She can be reached at 519-351-1271.

“My hope for Chatham residents is to bring new vibrancy to the city. That’s the truth. My heart and my home is here. It’s where I want to be and where I want other people to want to be.”