I finally did it. I got a COVID clipping on the weekend.

So, after more than six months – 189 days to be exact – I had my ears lowered on Sunday.

And if I can get it done – by my wife and daughter tag-teaming the clipping – after 27 weeks of it growing out – then you can too. Yes, home haircutting is not the same as going to a barber or stylist, but for now, it will do just fine.

My last trip to my stylist, Heather, was Nov. 22, 2019. Once I learned what the plans for this year’s Festival of Giving (1980s theme) were, I talked to Mike at the Foundation of the Children’s Treatment Centre of Chatham-Kent to see if we could raise a few extra bucks for them. The hope was people would donate to the treatment centre, but at the same time, every $5 would get them a vote on what hairstyle I’d sport for the festival – mullet, new wave, teased up 80s metal, or Mohawk, it would have been up to the public.

The Festival was to take place April 19.

But along came COVID-19, and everything went sideways, including my haircut.

I just kept letting it grow, but I wanted to clip it when the weather got warmer.

As it grew, it was kind of nice to have longer hair again. But then my bangs got longer than they’d ever been, including late high school when I had long hair. When stretched out, they were almost down to the end of my nose. And with six months of unchopped locks, I was a mop top. 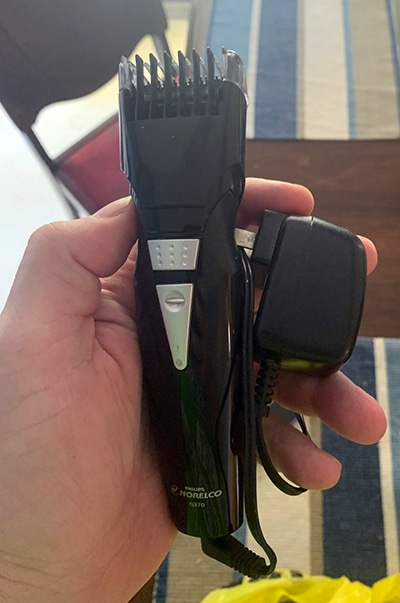 Finally, after putting it off, I stopped by at Eggless Chad’s house on Friday to pick up his clippers. Naturally, my friend made sure I was hydrated before I left, and we enjoyed a social distancing conversation.

On Saturday, I thought it would be the day to get buzzed, but we got busy (and barbecuing), so we put the chop shop off until Sunday.

Brenna, our daughter was to cut my hair, but she wimped out and deferred to my wife, Mary Beth. Both were worried I’d freak out if they did a poor job of it. I must come off as grumpy (me?), I guess.

But the reality is I wanted it cut and if it sucked, I own hats and could cover it up until my hair grew out a bit.

There were problems, however. The biggest issue was the length and volume of my hair. I’m proud to say I am a long ways from having to worry about going bald, but it made the trimming more difficult.

We should have started with a gas-powered weed whacker, as the rechargeable clippers conked out after less than 10 minutes of toiling and a surprisingly limited amount of cutting. Maybe one of the clipper companies should have a model powered by a combustion engine for people like me.

We plugged them in and I waited about two and a half hours and we tried again. This time, I started off in front of the mirror and hacked away at the front and top of my head. I made great progress, but had difficulty doing the right side of my head (I’m a lefty) and the back. I looked like a friend of Joe Dirt’s, as it was a rather hideous mullet.

Mary took over, but the clippers died again. This style was more Frankencut than anything else. The back was shorter on one side than the other, and not much was even.

Fast forward three recharging hours later, and we went back at it. Mary, armed with scissors and clippers, worked her magic.

There are a few uneven spots, and the most obvious one to me is on the top of my head where I must have pressed the clippers differently, so it the hair in one small section is slightly shorter than the rest of my follicles.

Nothing that requires a hat to hide my hair however.

We swept up enough hair to one-quarter fill a grocery store bag, if you can believe it. Nothing moves when I give my head a shake (reading social media these days can cause those shakes to occur regularly). No bangs in my eyes if it’s windy outside.

I will not be waiting another six months, for my next clipping.