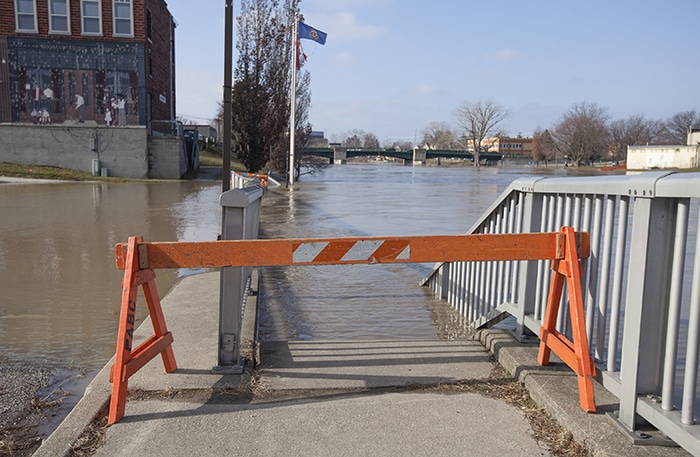 A Strong Wind Warning has been issued by Environment Canada for western Lake Erie until May 24.

Weather forecasts are calling for easterly and northeasterly wind with speeds between moderate and strong beginning Sunday and potentially lasting all the way through Thursday.

For the next few days, winds are generally predicted to remain from the east or northeast and above 30 km/hr. There may be periods with lighter winds, or shifts to the southeast, and some forecasts suggest winds could peak as high as 50 km/hr with gusts up to 75 km/hr.

Waves on Lake Erie are expected to be in the 1 to 1.5 m height range over the next couple of days, with the potential for larger waves should we get higher wind speeds. In addition to the winds, there is between 50 and 100 mm of rain in the forecast that could lead to additional flooding.

While winds are out of the east, they will be driving waves onto our Lake Erie shoreline throughout Chatham-Kent and Elgin County.  The wind direction and wind speeds have previously produced flooding in the Rondeau Bay communities of Shrewsbury and on the bay side of Erieau.

There is a risk that wave action could damage shoreline protection works and cause erosion all along the shoreline, including along the high bluff areas. There could also be flooding in low lying shoreline areas and in these communities.

The Rose Beach Line area and areas around Wheatley are also at greater risk from these easterly winds. The forecasts suggest that for most of this event, Erie Shore Drive would be sheltered but there is still some risk there if winds switch to the southeast. Shoreline areas on Lake St. Clair in the Lower Thames Valley Conservation Area jurisdiction would also be sheltered from this wind event. The extended period of time that winds are out of the east could lead to impacts beyond what is typically expected for these wind speeds.