Birthday boy Jeramia Carter-Ringuette stood outside with a balloon tied to his wrist, as 17 cars drove past him honking and cheering for his special day.

Jeramia then hopped in the car with his mom and dad so he could join them on the Chatham-Kent Birthday Cruises, a local effort to bring smiles to kids’ faces on their birthdays during the COVID-19 pandemic.

Laura Carter and Steve Ringuette, Jeramia and Jaxxon’s parents, initiated the group after being inspired by a similar effort going on in Windsor.

But the Carter-Ringuette boys are not the only ones who get the special surprise. On Jaxxon’s birthday they managed to drum up four drivers and hit up 6 homes, by Jeramia’s 17 drivers turned out and 12 homes were visited.

“The whole idea of it is not for our pleasure at all, although we enjoy it in every aspect that we do. It’s to see the kids faces. I’m a mom and I’m getting emotional now just thinking about it,” Carter said.

Kail Mazouri turned 6 years years old on Monday and spent the day playing soccer and eating cake, until the convoy, decorated in balloons and signs, drove down his street and waved.

Kail also received a birthday card, which Carter hands out to all the kids.

Kail loved his surprise, although he is convinced he will only officially turn six once he has a birthday party at the waterpark, which his dad promised they would do as soon as activities reopen. But in the meantime he is more than understanding why he cannot have a big birthday party with his friends.

“When you get the coronavirus you will be sick and some people die and some people not. And it goes up to our noses and our mouth so we have to stay inside and be safe,” he said. 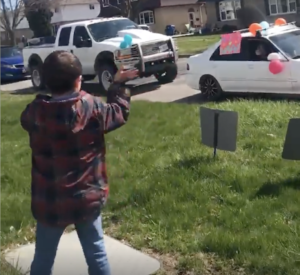 Anna Duquette-Webster, who is now a volunteer driver, was one of the first houses to have the drive-by celebration as her son Lucas turned 7 and was positively overwhelmed by the experience.

“He saw the cars going by and just said “MOM! MOM! LOOK AT IT!” and seeing the joy coming to him just made me really happy,” she said. “He even started crying when they brought him the birthday card.”

The Chatham-Kent birthday cruise doesn’t just bring a smile to kids’ faces. They also helped teenagers celebrate turning 19 and adults with milestone birthdays. One couple got the convoy surprise for their 57th anniversary.

“They celebrated 57 anniversaries together. Imagine not being able to do anything? We just want to bring a smile to everyone,” Carter said.

Carter said that all social distancing bylaws are practiced and anyone who wants to join the drivers or organize a celebration can contact their Facebook group, Chatham-Kent Birthday Cruises.