Two baby owls were reunited with their parents after a near-death experience.

All thanks to a Chatham-Kent resident, volunteer arborist, and a wildlife rehabilitation centre in Lambton County.

On Sunday, howling winds and a dramatic storm caused a large tree to plummet to the ground, throwing the two newborns out from their nest into the bushes below.

A nearby homeowner, Kortney Terry, who loves to bird watch, was made aware of the situation from their neighbour who stumbled upon the scene during a walk.

Terry immediately called the Bluewater Centre for Raptor Rehabilitation in Plympton-Wyoming where founder Linn Eves directed her to bring the birds inside, keep them warm and bring them to the centre for a check-up.

The Bluewater Centre is a non-profit organization that rescues, rehabilitates and releases injured birds of prey, as well as loons and herons, in Lambton County.

“I am just so grateful they agreed to meet during COVID. We dropped them off at the door to respect social distancing,” Terry said. “(The pandemic) definitely makes an impact on caring for wildlife because there are not as many people out in the community or services around.”

Eves said she estimated the fall to come at a height of 20-25 feet but it is pretty common for nestlings to survive those types of falls because the heavy bones are not fully formed yet. No injuries were found.

The two Great Horned owls – named Tiny and Rosie – would have likely died if they had not been found because parent owls do not have the instincts to retrieve their newborns from the ground if they have fallen.

“Nestlings have to be in the nest for the parents to feed them. They then start jumping on their limbs and flapping their wings. That is when they are at the branching phase. If they fall in that phase, they can scurry around themselves and hide,” Eves said.

She added this was a pretty unusual situation, as they normally do not encounter the tree, the nest and both siblings falling all at once, making it difficult to help reunite the babies with their parents.

Two volunteers, Georgia Clifford and arborist Gareth Salomons, went to Chatham to build a new nest in a nearby tree made from a laundry basket filled with pine needles and with adequate drainage. They built a frame around the basket to safely secure it on the branches as high as they could.

Eves said if someone finds a baby bird on the ground, old boxes or drawers are also quick ways to make a new nest when in a hurry to reunite nestlings with their parents.

Within three hours of Terry making the initial call to Bluewater, Tiny and Rosie were back in Chatham, safely secured on a nearby tree where their parents quickly returned upon hearing their call.

“I was just so grateful to have that experience to help animals and nature out,” Terry said. “It makes me feel really optimistic and I was able to show my (three) kids what care, compassion and empathy look like.”

Eves said the centre is still open during the COVID-19 crisis, with only one employee working per shift. Anyone who finds an injured animal near them can visit Ontario Wildlife Rescue to find the closest network of rehabilitators near them.

“Chatham had a great neighbourhood watch that helped save the birds,” Eves said. 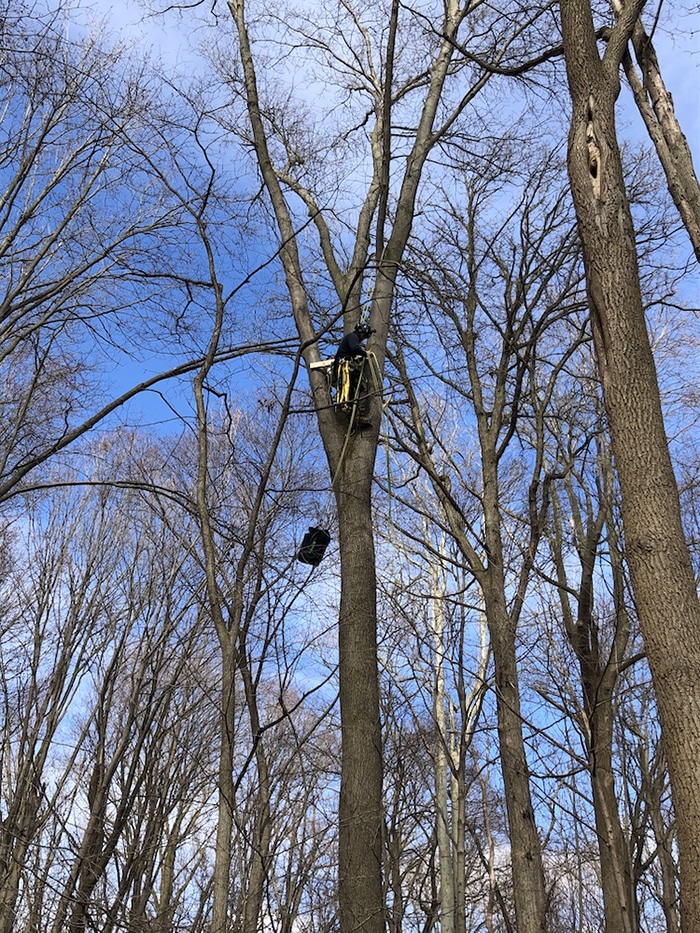