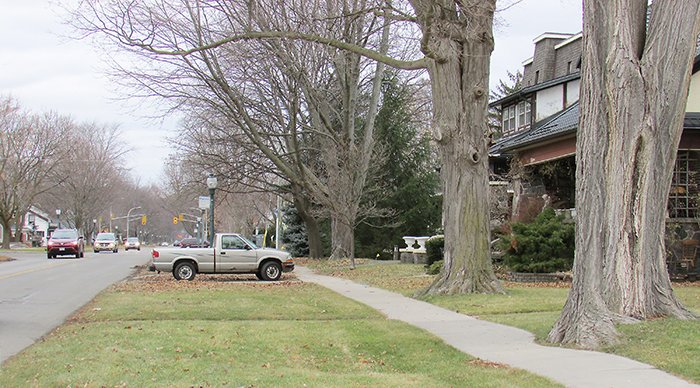 Residents on Victoria Avenue had a chance to look at potential improvements to their street at a recent public meeting and give feedback on the Victoria Avenue Infrastructure Renewal Project proposed for 2022.

The public information meeting took place at Sprucedale United Church with display boards set up by project consultant RC Spencer and Associates, with conception drawings and proposed timelines for construction.

Municipal engineer and Manager of Infrastructure Services Mark McFadden said the project is in the very early stages and includes Victoria Avenue from Thames Street to McNaughton Avenue. The main purpose of the project is to update the sewer system and separate the storm sewer and the sanitary sewer pipes.

He said the road has to be ripped up to complete the update and it is an opportunity to add to or change the layout and design of the road and sidewalks. Due to the age of the street and its heritage significance, McFadden said the public input on what they would like to see – and not see – is important.

“There were about 70 people at the meeting which is a good turnout for a public information meeting. That was good to see. The main concerns expressed at the meeting and through other input is the location of a bike path, the possibility of removing trees and maintaining the heritage look of the street itself,” McFadden noted. “There are concerns about how it is going to look after the project is finished.”

Some of the details to be considered on the design would be the location of the sidewalk, McFadden added. For instance, the sidewalk could be curbside or could meander around the mature trees that line Victoria Avenue. There was also a design board that showed a roundabout at Stephenson Avenue and Gladstone as an alternative to a stop sign because of the slower-moving traffic volume.

Residents at the Thames Street end of Victoria expressed concerns about losing driveways and frontage due to their homes’ proximity to the road allowance when the project was first discussed last fall.

The recent public information meeting was just the first one this early in the design phase and McFadden said they will be gathering all the comments, concerns and input for consideration and will be looking at another public meeting in perhaps September of this year.

Details of the project are still in the early stages as the first potential phase of the project from Thames Street to Grand Avenue West isn’t proposed to begin until spring/summer of 2022, pending council and capital funding approval.

“We have to rip up the road from the river at Thames Street all the way down to McNaughton, so this is an opportunity to upgrade the road. It is a necessary project, but we want to keep the heritage component of the street,” McFadden said. “It is an old road and there is definitely heritage value to it from a municipal standpoint as well.”

Residents who weren’t able to the attend the recent public meeting can still make comments and bring their concerns forward by filling out a comment form online or by calling municipal customer service reps at 519-360-1998.

The details of the project and the artist drawings of the design concept can be seen on the municipal website at https://www.chatham-kent.ca/residents/maintenance/victoria-avenue-infrastructure-renewal. Copies of the comment form are also available on the website.