Another academic has joined the search for answers for well owners with sediment and gas issues in Chatham-Kent.

University of Windsor Assistant Professor Scott Mundle, PhD, is with the Great Lakes Institute of Environmental Research (GLIER) with expertise in environmental chemistry/geochemistry and has joined his colleague, Dr. Joel Gagnon, head of the Heavy Metals Lab at GLIER, in researching the problems affecting well owners in north Chatham-Kent.

In the absence of any action on the Health Hazard Investigation promised by the Doug Ford government and announced this past summer by MPP Monte McNaughton, academics have stepped up to look into the problems for well owners, researching the types of heavy metals in the Kettle Point Black Shale particles and the migration and composition of dissolved gasses in water from the underground aquifer.

At the farms of Dave Lusk in the former Chatham Township and Marc St. Pierre in the former Dover Township, Mundle has tasked graduate student Karly Dominato (BSc Honours Chemistry) with collecting samples of the gasses bubbling up in both wells.

At the Lusk farm, the type of well pump is not designed to handle both water and gas being drawn from the underground aquifer, so Lusk’s well is gas-locked and he can’t draw water into his home. St. Pierre’s well does allow water to draw but it contains gas, sediment and biofilm.

The research will identify the composition of the gasses and where it is coming from. This area, known for the Kettle Point Black Shale and oil and gas exploration, is causing issues for well owners after construction began on neighbouring wind turbine projects.

The companies, Samsung and Pattern Energy, that own the wind turbines, claim they have proven through their own study and collection sampling that the turbines aren’t the cause of the change to water wells in the area.

The research by the two professors may help the well owners pinpoint the problems and potentially develop methods to help them get their water back without compromising their health. Knowing the gasses that are causing the eruptions at the well head and where they are coming from are part of that process. This area is known to have issues with radon, methane and hydrogen sulfide gasses, all of which are harmful to human health in concentration.

In 60 days of monitoring Lusk’s well, Gagnon and Water Wells First member Kevin Jakubec have noticed fluctuations in the temperature during an off-gassing event, where water and gas spew out of the top of the well casing and from the cap on Lusk’s filtration system in the house.

“We are also monitoring the temperature. Is it water and gas coming into the well or it is just water with gas in it coming into the well and then unmixing in the well? So, if it’s water and gas coming into the well separately, you wouldn’t see a temperature affect, but if it is water with gas in it that enters the well, and the gas unmixes, (a phase change from gas to vapour) that would release heat, and we see that actually in the water level monitor,” Gagnon explained of the results of the 60 days of monitoring Lusk’s well. “There is heat being released in some of these off-gassing events, so it looks like the majority of the gas we’re dealing with is actually dissolved in the water and it’s becoming unmixed because of the pressure drop at the well head.”

Jakubec said Lusk’s pump and all other well equipment was properly maintained and is in working order.

“This has been verified also in Dave’s extensive baseline testing of his well,” Jakubec said.
For the well monitoring conducted by Gagnon, a voltage datalogger was attached to the relay in his pump switch that accurately recorded to one tenth of a second the duration and number of every pump cycle during the 61-day exploratory investigation that was just completed. Pressure and temperature were captured twice a second.
“By comparing data from In-Situ Corporation’s Level Troll 700 sensor that measured temperature and pressure in Dave’s well casing at a rate of twice a second for 61 days straight, a better picture of what’s happening can be determined,” Jakubec noted.

Gagnon said looking at the data and seeing if there is any correlation between meteorological events and major off-gas events, (when the pressure causes the water and gas to bubble up and spew out), including wind direction and speed, will help Lusk know when it isn’t a good time to try and draw water.

The off-gas events have previously been compared by Gagnon to a can of pop being shaken and then opened. What is causing the disturbance of the gas to cause it to off-gas so violently, Gagnon said, isn’t known at this point.

“We’re using these steps to try and determine what is going on and how we can predict it. We don’t think we can control it, but how can we adapt to it so Dave and others can use their water,” Gagnon said.

Lusk said he is disgusted and disheartened with the provincial government’s lack of action in helping the farmers affected by the well interference. Concerned by the results of his hair sample testing which showed above safe levels of heavy metals, Lusk just wants to have his clean water back that has been on his farm for generations. 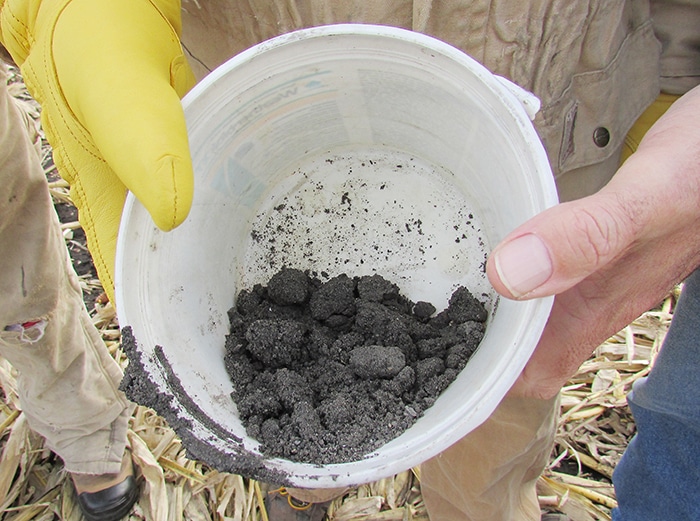