It’s a chili time of the year

Dec 4 • Bruce Uncorked, Feature Story • No Comments on It’s a chili time of the year 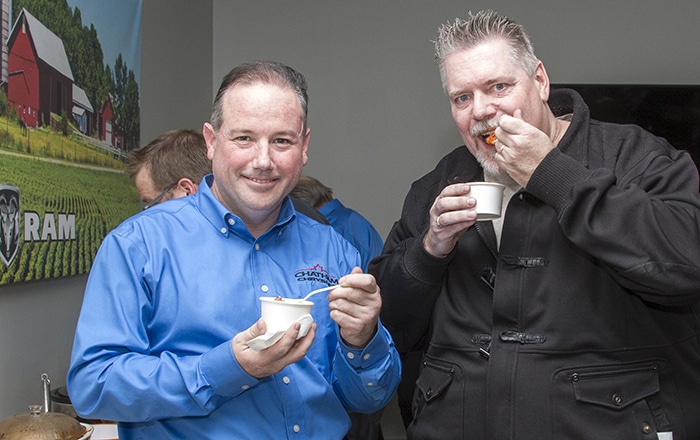 The Chatham Voice’s Bruce Corcoran, right, and Chatham Chrysler’s Mike Hogue enjoy the chili at the dealership’s recent chili cook off. Corcoran said sometimes his work at The Voice is very, ahem, challenging.

I had a tough job last week. Well, so did a lot of people. Chatham Chrysler had a chili cook off and they wanted judges to come in and taste the selections and vote on their favourite.

They were also collecting donations to the Special Olympics Ontario.

Wait, eat chili, and contribute to a great cause? Of course I showed up!

There were about 10 Crock Pots full of chili to choose from. I wasn’t surprised to see a lot of familiar faces on hand to sample and vote.

But there was a problem. Every single cup of chili I tried was darned good!

You expect to find at least one that doesn’t appeal to you. It might be too watery, too many of one type of vegetable, not enough meat, or something. But at the dealership – as 10 staffers there contributed to the event – all were quite good. Even the mildest offering – I like some heat – was very tasty.

None, however, were overly spicy. Oh, my sinuses did clear over the course of the lunch hour, but nothing sent me seeking bread or a dollop of sour cream.

Two, however, did stand out as the spiciest of the selections; I voted for one of those.

Kudos to the participating home chefs. And what a fun idea.

Some folks went back for seconds on their favourites to make sure they voted on the right one. I didn’t, not because I was so certain of my selection, but rather because I was darned full.

There were several selections that were very heavy on the meat, never a bad thing in my books. None was lacking in beef, or moose, or venison, so they filled you up.

Not only were the folks creative in their product, but also in their marketing. One pot of chili was called “Impeachment Chili.”

Why? Because it “Trumps all others,” and “It will warm your whistle blower.”

If I were to put together a chili, I would have spiced it up more, but that’s just me, and chances are that chili would not have widespread appeal.

These folks were smart, as not everyone loves it spicy. The hottest was a solid medium, so it should have been enjoyable to most everyone.

But the same chili came with ghost pepper tortilla chips if you wanted more spice.

As I sit here typing about my desire for more heat, I will readily admit I pushed the “chicken” button on those chips. I saw John Lyons of Hub Creative patting his brow after ingesting one of those. I also saw Mike Uher of Toast & Jam react to his realization that his friend Mr. Lyons had “innocently” given him one to try without telling him what it was.

And then I saw our own Sarah Schofield, who came along with me, calmly munch one down without pause. Latino blood runs through those veins from her mother’s Mexican heritage, and Sarah enjoys the heat.

But she didn’t even flinch! Here these big men are sweating or gulping water, and she’s standing there indoors, with her coat zipped up!

After seeing that, I knew there was no win for me in eating one of the chips that several people told me made their lips go numb.

Any reaction would have shown me, a heat fan, as wimp compared to Sarah. I threw in the napkin on that one.

Remind me to never get suckered into a hot wing eating competition with her. The only way I’d win is if she passed out from laughing while watching me, tears streaming from my eyes, as I gobble up bread and guzzle milk to try to put out the fires of hell that a very, very hot wing placed inside my mouth.

I can just see it – my mouth would be like a volcano, my face would be beat red; I’d look like Mount Vesuvius cooking off, and Sarah would be as chilly as an iceberg, wondering what all my fuss was about.

Time to get Finnside, buddy

As mentioned before, our cat, Finn, loves the outdoors. He’s often out for most of the night.

But two factors are going to alter this guy’s nighttime fun: cold weather and coyotes.

As the mercury continues to dip, we’re looking to kick the little fella out during the day and again early in the evening, keeping him inside overnight. On the coldest of winter days, the fur ball will be stuck inside for his own protection, as we don’t want him to become a cat-sicle.

But a neighbour across the street told us recently coyotes have been spotted in the field behind their yard late at night. We’d hate for Finn to become a coyote’s meal. He’s fast, but he’s also darned curious, especially with other animals. His claws and his speed might not be enough to protect him.

But the added inside time means he’s looking for stuff to do and items with which to play. He’s taking a real liking to hair ties – the elastic fabric rings that people use to put their hair up in a ponytail.

And he is really good at finding them. One recent night, he hopped up in my lap and appeared to take a keen interest in a bag of popcorn on the table beside me that I had not yet put away. He nuzzled the bag with his nose and I scolded him. But I also looked over and noticed a hair tie underneath the lip of the bag.

I put that in my pocket and hoped he would calm down.

His eyes stayed wide and we let him out for a few more hours of fun.