These men will be missed by many

Nov 6 • Bruce Uncorked, Feature Story • No Comments on These men will be missed by many

It’s been a sad couple of weeks here in Chatham-Kent. Among the folks who passed away recently were Tony Matteis and Phil Williston.

I had the honour of meeting both men and knowing their sons.

Phil passed away Oct. 26. For many years, he was the heart and soul of the Chatham Goodfellows. For more than five decades, he served on the Goodfellows board, and brought his family into the Goodfellows fold over the years.

There are four generations of Willistons involved in Goodfellows; dozens of them. That dedication earned the family a lifetime achievement award by the Goodfellows in 2017.

Phil instilled that giving attitude in all of them. He will be missed.

Tony Matteis came to Canada and worked for 35 years for Huron Construction before founding his own business in Chatham in 1985, Tony Matteis, the Cement Specialist, and it is still operating today.

I only met Tony a couple of times at Matteis family functions, but I’ve known his sons Dave, Mark and Paul for years. Tony infused his work ethic with his boys, and reinforced the importance of family.

Dave has run the business for years, and for most of those, he has worked side-by-side with his crew on jobs. He got his hands dirty day in and day out.

Paul is one of the hardest working guys I know, and would be cleaning equipment and vehicles even after a full day under the hot sun on the job.

Mark is one of the best cement finishers I’ve ever seen.

Tony’s legacy will live on through his kids and grandkids. 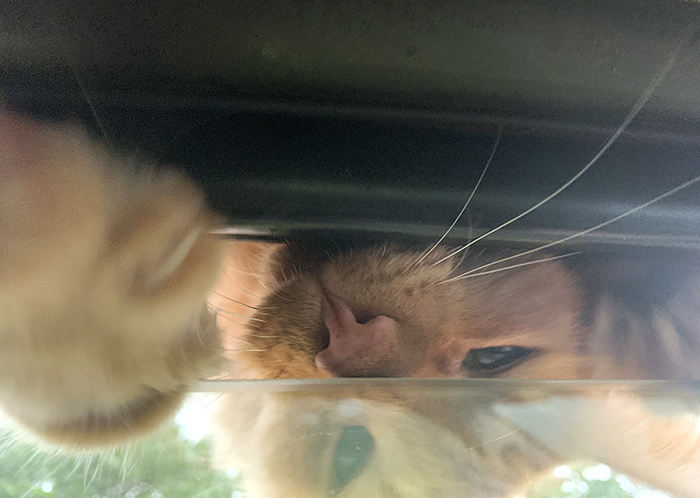 Cats hate vehicles, right? The only time these furballs get into a car is to go to and from the veterinarian’s office, for the most part.

They’re smart enough to know that car = poking, prodding and maybe a needle.

So why the heck is our cat trying to break into my truck?

It has happened on more than one recent morning. I’m ready to go for the day and hop into the truck and scan the news on my phone until our daughter is ready for a ride to school.

So, Finn, the cat, who is zany on the best of mornings, has taken to wanting in the truck when I’m just sitting there.

But the first time he did it, he surprised the crap out of me. I had the radio on, and was scanning my newsfeed when I caught a blur out of the corner of my left eye – it was the cat’s paw … coming in from my driver’s side window!

Finn had hopped on the truck, climbed onto the cab and leaned over to look in at me. I had the window open a couple of inches, so he decided to stick his paw in there to wave hello/take a swipe at me/all of the above.

He scared the crap out of me. And then I had to laugh. He’s upside down staring in the window, waving his paw at me.

I wasn’t letting him in, as he was damp from the dew, but I opened the window to give him a scratch under the chin.

The guy is whacked in the morning. If he doesn’t hop up on the truck now and stare in the windshield at me, or trying to break in, he’ll sit right below the back bumper and immediately behind a rear wheel, to watch from “shelter” to see what’s happening in the neighbourhood.

I’ve lost track of how many times Brenna has come out to go to school, to have to get him out of the way first. Usually, as soon as she exits the house, he’s off at a trot to get indoors.

There is a tried and true method to get Finn to move out of the way, however. Start the truck. Generally, he’s off like a shot when the 5.7L Hemi turns over. Some days, he blasts off into the neighbour’s yard before turning back to look at us. Other times, he gets about 20 feet into our front yard and plops down under the tree to just casually glance over with a look that says, “Yo, it’s all good. I wasn’t scared. I just wanted to move at 200 mph for a half-second.”

Furthermore, a few evenings back, Brenna walked down the street to her friends’ house to go over some homework issues. Her friend’s father noticed a cat outside and jokingly asked her if it was Finn. She looked outside and said it was indeed our cat.

This was nine houses down.

It turns out, he periodically visits the house on his own too. But this time around, he followed Brenna discreetly.

And when she went to leave to return home, he was on their side steps waiting. Finn escorted her all the way home in his own commando-like manner. He’d let her walk ahead before sprinting past her at high speed and then stopping suddenly. And then he’d repeat the process.

But at one point, as he sprinted along the curb, Brenna thinks he lost his footing, as suddenly he plowed through a pile of leaves beside the curb, before continuing on his way.

This cat ain’t right. Nor is he boring.