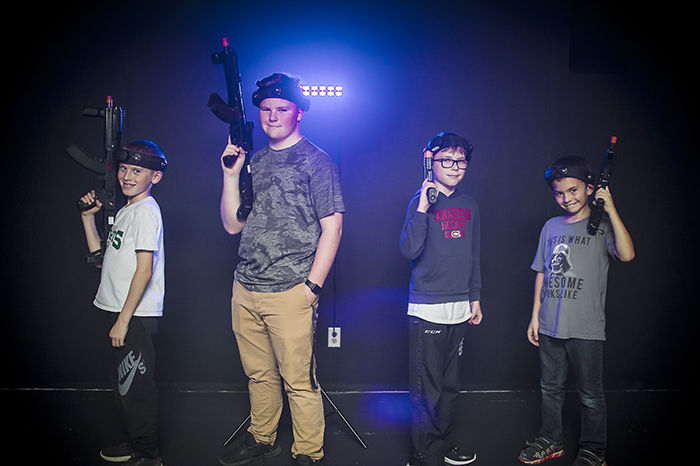 FlashPoint Laser Tag offers people of all ages another recreational option in Chatham. It recently opened on Queen Street.

For residents of all ages gunning for some fun, a new laser tag facility has recently opened in Chatham.

FlashPoint, situated on Queen Street above MicroAge, is now open to the public.

Owner Jay Denorer, a local OPP officer, saw a need in the community.

“I’ve been thinking about something like this for about three years now,” he said. “I was watching social media and saw how people were complaining there is nothing for families to do in the area. This is just something different.”

It’s also something for which he had to take his own kids out of town to enjoy in the past.

“I drove my kids to Windsor to play down there. The cost was becoming prohibitive,” he said. “I thought, ‘Why not bring something to town?’”

Laser tag involves participants donning sensors that pick up when a beam from another participants’ gun is “fired” at them. After a certain number of hits, that player is eliminated.

Unlike paintball, it’s a painless way to play a live first-person shooter (FPS).

And it gets the kids up and moving, unlike an FPS video game where they plant themselves on the couch and give their thumbs a workout on their game controller.

“The biggest takeaway from this is exercise. This is getting them out of the house and getting them moving around. The kids are playing games like Fortnite online anyway,” he said. “It’s also a great family event.”

The grand opening took place Oct. 25 and Denorer said it was well received.

“People had a blast playing around. And the weekend was very busy. We keep having more and more people show up,” he said.

Denorer said a minor hockey team tested FlashPoint in several ways, as they arrived with 26 people, ready for some fun.

The owner said he discovered that the businesses approached its maximum.

“The hockey team really tested our equipment, and we now know the maximum number of people we can go with,” he said, adding the number is 28.

That’s based on the number of laser assault rifles, shotguns, pistols and even knives FlashPoint has on hand.

FlashPoint operates in 4,200 square-feet of space, so even with a full crew in mock combat, there is plenty of room for everyone.

“It looks a lot bigger when you turn the lights out,” he said, adding it’s not pitch black either. “We have one overhead light and six black lights on the side. You are still able to see, but it’s a low-light situation – almost like being outside at night.”

Denorer said each participant has a headband with sensors, and a weapon, which also has damage sensors.

“The guns have sensors. You will do weapon damage. If you shoot the gun long enough, you can eventually eliminate the player,” he said.

Players know they’ve been “hit” when their guns or headbands vibrate. Take enough hits and you are temporarily eliminated, as you have to leave the floor to “respawn,” Denorer said.

Denorer said parents don’t have to worry about any potential optical damage from someone being “shot” in the face by the guns.

“With these lasers, there is no risk whatsoever to the eyes. It’s not like a laser pointer where you can actually do damage,” he said. “These are very low power and we have acute sensors.”

FlashPoint offers a variety of game options, and these are continually expanding, as Denorer said staff are testing out new options every week.

There are death matches, capture the flag, and even zombie apocalypse.

“Every week, we introduce a new one,” Denorer said. “It’s to give us the experience of using the equipment and seeing its limitations.”

You can book birthday parties for the kids, or corporate bonding experiences for businesses.