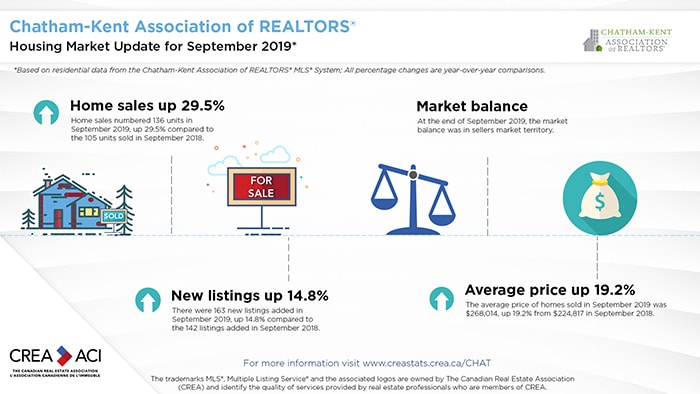 It was a hot September in terms of home sales in Chatham-Kent. In fact, it was the hottest on record for sales.

A total of 136 units changed hands in September, according to the Chatham-Kent Association of Realtors.

That’s a jump of nearly 30 per cent compared to September 2018. It also marks the highest September sales figure ever recorded.

On a year-to-date basis, home sales totalled 1,035 units over the first nine months of the year, up nearly four per cent from the same period in 2018.

“Home sales surged ahead in September to set a new record for the month, which is an impressive feat given how few properties are currently out there for sale,” said Steve Carroll, President of the Chatham-Kent Association of Realtors, in a media release. “The competition between buyers for that limited pool of listings continues to push average prices to new records.”

“With just three months left to go in 2019, the average sale price in the region remains on track for an annual gain of about 20 per cent,” he said.

There were 163 new residential listings in September 2019. This was an increase of nearly 15 per cent on a year-over-year basis.