Food, fun and friends for getaway 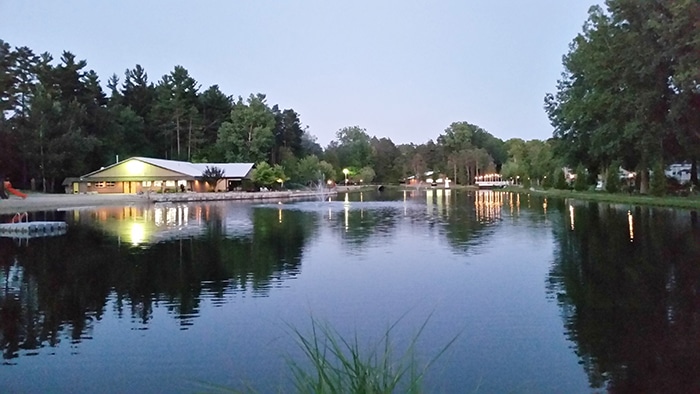 Not a bad place for a getaway. Near Bayfield.

What do two people with precious little spare time on their hands do to celebrate 30 years of wedded bliss?

If you are Mary Beth and I, you invite friends!

First off, Mary Beth asked her brother, who has a trailer up near Bayfield, if we could borrow it for the weekend. Check.

Then you invite close friends Arlene and Pete to come along. Check.

And in the same town: Lindsay, Ont.

We lived there for 13 years, and Arlene and Pete were our neighbours for nearly all of it. They wound up lasting in Lindsay much longer, but moved to Chatham last December.

We are forever connected.

Hence the low-cost getaway, which resulted in lots of laughs and lasting memories.

Even before we left, the laughs began. Mary and I had the audacity to take a half-day off on Friday. Just before I escaped the office, the other folks pulled out two gift baskets for us.

We received a selection of craft beer, wine, snacks, a variety of barbecue sauces, a deck of playing cards and other getaway necessities for a weekend at the trailer.

Michelle, Fatima, Jeanine and Sarah are extra special people; their gifts were so appreciated…and enjoyed.

For the most part, the memories of this aging crew functioned fine, but, man, did we eat.

And I didn’t even oversee the barbecue once. Pete took control of the Broil King and did a fine job.

We ate our fill of chicken and hot sausages, along with squash and corn the first night and followed that up with four steaks that took up the entire grill on the barbecue the next night.

A few beverages following dinner Friday saw the four of us relaxing by a fire that just didn’t seem to want to stay lit. We packed it in early, as everyone seemed exhausted, and hit the sack by midnight.

Saturday delivered a light breeze and more hot air through the whispering pines where we stayed. It reminded me of my time living in northern Quebec. Here in Chatham, I’m used to the sound of the wind twisting the leaves of maple trees on one another. As the wind blows through pine needles, it is an altogether different sound.

We men relaxed, cut some wood and planned for the fire that evening, while remaining hydrated, as the ladies went shopping in Clinton, Ont. at some magical shop called Elliott’s.

Well, it sounded magical with Arlene singing its praises upon her return. That included her love of a hat she found there, followed, unfortunately, by her introducing me to the song, “My Hat, It Has 3 Corners.”

If I never hear it again, it will be too soon. But I am sure Arlene will call me up just to sing it to me.

We had no problem getting the fire going while it was still light out, aided by some newspapers I brought along that I stupidly forgot about the night before (see, I said I would forget something!).

I made sure it was going well as Pete took to grilling the steaks as the sun headed towards the horizon. They truly did take up the whole grill.

I dared Pete to eat the largest of those steaks, but somehow that was left for me, and I smartly cut that sucker in half.

In the meantime, Pete wound up with the thickest steak, and vowed to eat it in its entirety.

We had more corn and more squash (good thing we all love squash) to go with the steaks.

And Pete managed to complete the steak.

I washed up the dishes as the meat coma set in on the others. When I finished, I turned around to see three people staring back at me through half-closed eyelids. They opted for a quick walk to try to wake up before returning to the campfire. I read briefly.

But by the time they returned, I was told it was still very muggy outside, too much so for a campfire. I thought about how Pete and I survived no problem before dinner out there, but then realized that was before the meat sweats, and the sudden lack of a breeze.

By 10 p.m., we anniversary fools gave up and called it a night. Too much fresh air and food.

Sunday delivered heat, humidity, a strong breeze and for me a very stiff back. All too soon, it was time to come home.

We enjoyed one final celebration of the weekend after cleaning up around the trailer, a late lunch at the Black Dog Pub in Bayfield. The place, heck, the entire main drag, was busy that afternoon. Given the diverse draft beer selection and great food, we can see why the pub’s patio was so busy.

Some may say we didn’t do much of anything on the weekend, but I beg to differ. Hanging out with good friends in a relaxing place is pretty special.

There were also no mosquitoes to speak of. I expected to provide blood samples each evening sitting outside, but the little vampires did not come around.

And it is quite entertaining to see squirrels bombing other trailers. The black squirrels of the park seem to enjoy dropping pinecones from great height onto trailers and even vehicles.

Picture a quiet park on a Sunday morning, the pines whispering in the breeze, when that serenity is interrupted by a loud “thunk!” I half expected to look up and see a squirrel, red bandana rolled up and tied around his head, ripping the top off a pinecone with his teeth and tossing the cone onto the roof of the nearest trailer.

That’s what happens when you are at a place where you can just relax and let your mind wander.

We came home well rested, but realizing we really should try to get away for even a day or two longer next time. Too much food crammed into too small a timeframe. 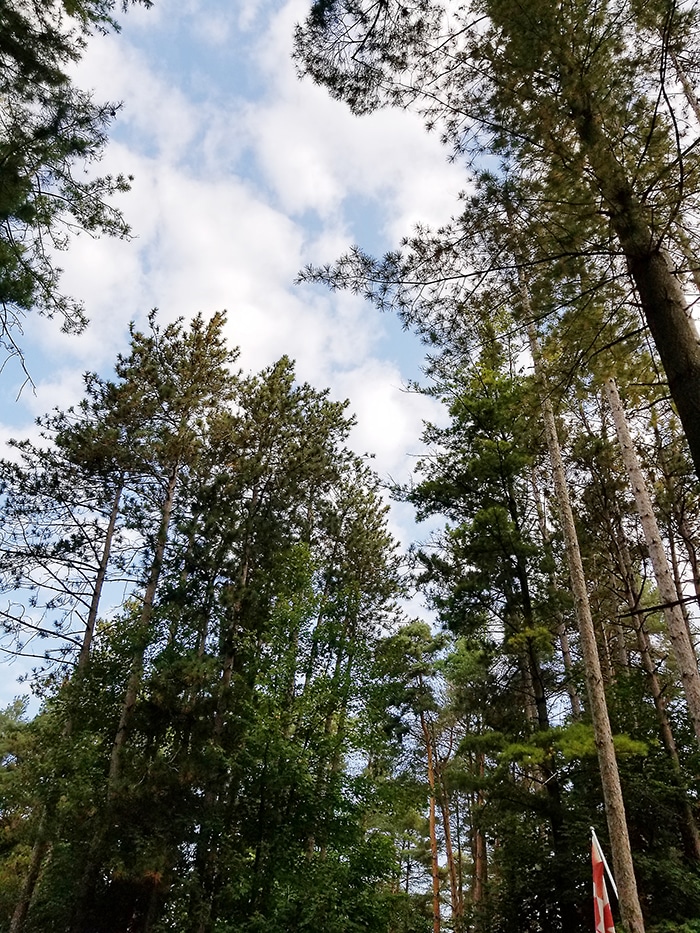