Angela Pestowka has lived with kidney disease for all of her life.

And she considers herself lucky.

Angela, 45, of Chatham, is the 2019 Kidney Walk Ambassador for Chatham-Kent.

She said shortly after her birth, doctors discovered she had polycystic kidney disease (PKD). It changed her life before it really got started.

“They found that when I was about two weeks old. Normally people don’t find out until they are in kidney failure,” Angela said. “I’ve been so lucky. They’ve been able to give me all the preventative stuff for 45 years.”
PKD causes multiple cysts to form on the kidneys, which can reduce kidney function substantially.

The average kidney is the size of a fist; Angela’s kidneys are roughly the size of footballs.

She’s on blood pressure and cholesterol medication. Plus she adheres to a strict diet.

“The diet is number one. Low to no sodium, mostly vegetarian. I eat barely any red meat,” she explained.

And Angela stays in great shape, working out regularly and keeping her body in top condition. She uses light weights, walks and does yoga for cardio.

Her regimen has paid off. She’s avoided going into kidney failure and the resulting long hours on dialysis machines. Plus, the typical life expectancy for people with PKD is about five years. Here she is, 45 years later.

“Just regular check ups. I go every six months to the kidney care centre in London,” Angela said. “They check my levels there. They may advise me to eat less potassium, or perhaps I need more iron.”

She’s been asked to participate in various kidney studies there as well.

Through it all, she enjoys her time at the centre.

“I love them there. They are fantastic,” she said of the personnel, and it goes beyond the nurses and doctors. “It’s the level of care. When I go there, I see a social worker who makes sure I can financially afford to do what I do.”

There is a pharmacist on site to review medications with Angela, and even vitamins to ensure there are no bad reactions.

The bi-annual visits are a long way from what Angela faced as a child.

“When I was younger, up until the age of 12, I’d have to stay a week in a London hospital. They didn’t have the technology. I had to get all the tests done there. It was horrifying. I hated it,” she said.

Angela is a fitting ambassador for the walk, not just due to her years dealing with PKD.

Angela is driven to raise money, with the end goal to help fund research.

“Research saves lives. Research gives hope. Research opens up opportunities that were previously unthinkable for people like me,” she said.

Serving as the ambassador holds special meaning to Angela as well.

“When I think about kidney ambassador, I think of what it means to the Chatham-Kent community as a whole, not me alone,” she said. “Healthy diet and exercise habits, coupled with a positive mindset, build a vibrant and flourishing community. For many, the progression of chronic disease can be prevented or slowed by implementing diligent self-care. I also aim to promote awareness of the importance of being an organ and/or tissue donor and giving the gift of life.”

The walk takes place Sept. 15 in Kingston Park in Chatham.

More information can be found at www.kidneywalk.ca. 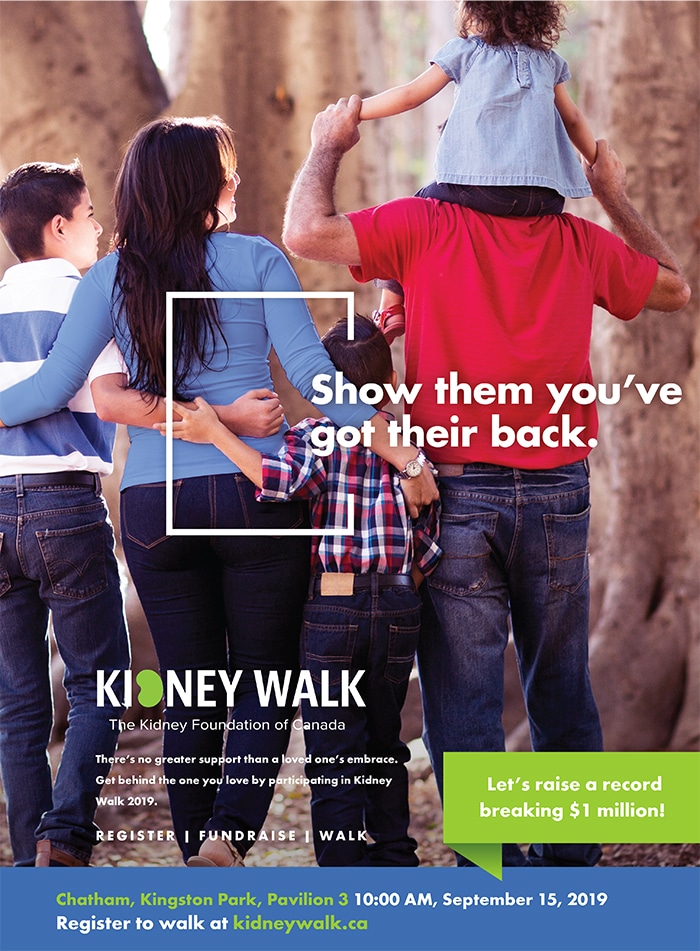