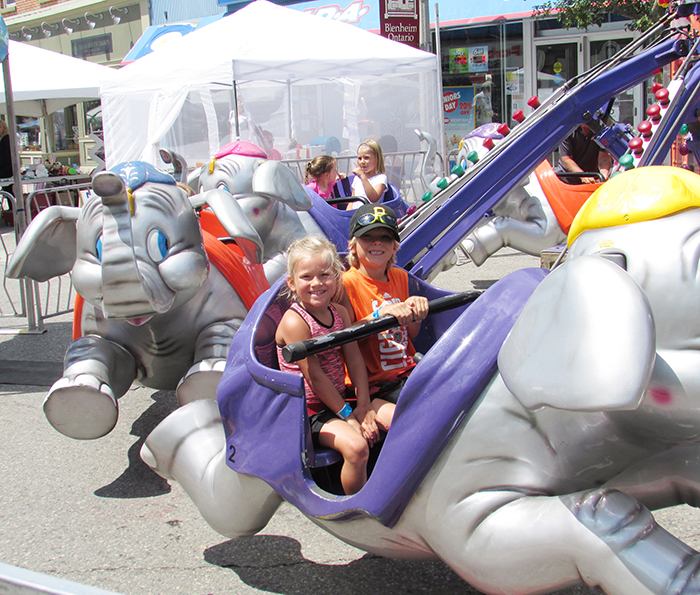 All things cherry are set to soon return to Blenheim next week, as Cherry Fest is set to return July 18-20.

Event chair J.P. Huggins said the three-day shopping and entertainment festival will feature some interesting additions and some unfortunate subtractions.

He said World’s Finest Shows returns for a fourth straight year to run the midway. There will be seven rides again this year, $20 ride-all-day passes, and an old/new twist.

“Two rides are returning this year. Both have been huge crowd favourites in the past, but haven’t been here in years,” Huggins said, but refused to say anything more.

The ladies of Trinity United Church, however, will not be making their legendary cherry pies this year. Huggins said the pies will be missed.

“No younger people stepped up to help do it. I’ve been in that church basement. It was an assembly line. There were 35-40 people working like mad. But the youngest person down there was probably 70,” he said.

The Trinity ladies would supply upwards of 4,000 pies for sale over the three days, and they would sell quickly.

Huggins said some groups will try to fill that void, but it won’t be easy.

He said the Blenheim Youth Centre, which had made some pies in the past, will increase production. He expects other groups will try to make up for the shortage as well.

But Huggins fears some people may not be happy.

“There will be some upset people. People came from out of town specifically for those pies. They were amazing,” he said.

With so much else going on, including the deals from downtown stores, the food and beverages from Cherry Central and with other vendors, plus all the entertainment, Huggins thinks it will be another successful year.

“It’s just an awesome event where the whole community comes together. You meet up with people you haven’t seen in a while,” he said.

Huggins said the weather historically follows a pattern for Cherry Fest, typical for mid-July in Chatham-Kent.

“Usually every year, we have scorching fires of hell heat and one serious rainstorm. Hopefully the rain comes late at night,” he said.

Despite precipitation, people will still come out and enjoy the shopping and fun.

“Even when it’s been outright raining, it blows my mind to see how many people are still out walking around the downtown,” Huggins said. “People will walk through the rain to get a good deal and to see some entertainment.”

The entertainment starts on July 18, the Thursday, when the midway opens, the sales begin in earnest, and live music takes place throughout the day.

Dancers, gymnasts and young martial artists will put on performances early in the evening, followed by the popular Cherry-oke competition. There’s no charge to enter, and one lucky participant, chosen at random, will receive a cash prize.

Friday delivers more shopping, fun and food, as well as a pie-eating contest at 5:30 p.m. and live music in the evening.

Saturday is when it’s time to get spitting.

Huggins said organizers are hoping to go for the Guinness World Record for the most people spitting a cherry pit at the same time. They tried to do it last year, but Mother Nature didn’t co-operate.

“Last year, we got lightning. We had to cancel for safety reasons,” he said. “But rain or shine, we are going for it.”

That follows the kid spit competition at 10 a.m. and comes before the celebrity spit challenge at noon. The real competitors show up after that to compete in the men’s and women’s open.

Huggins admits organizing Cherry Fest keeps him very busy at this time of the year, but it is a labour of love.

“It’s an insane amount of work, but it’s worth it,” he said.

His favourite part is spitting cherry pits and just having fun at the friendly competition.

“I’ve been spitting pits since I was 12 years old. I like having the opportunity to make people laugh, see people have fun and see people come together as families,” he said. “I get to stand up in the centre of town with a microphone and goof off.”

« Stormy summer sight in C-K Friendships forged across the pond »