First responders that come to our aid in our most tragic of circumstances do their job and do it well, but for them, that isn’t the end of it.

Many of the police, fire, ambulance and other personnel that deal with trauma, in some shape or form every day, need support as well, and they need to know having a mental injury does not mean you are mentally weak – it means you are human.

On PTSD (Post Traumatic Stress Disorder) Awareness Day in Chatham-Kent, the Chatham-Kent Police Service, EMS, Fire Department and Probation Officers Association of Ontario joined together to educate the public on how daily stress can lead to invisible wounds.

Coun. Aaron Hall introduced speakers on behalf of Mayor Darrin Canniff, and praised the teamwork of the first responders working together to end the stigma of dealing with PTSD.

Speaking at the event, Staff Sgt. Gabe Tetrault with the Chatham-Kent Police Service said more awareness of the effects of PTSD is needed to end the stigma associated with admitting that first responders are having trouble coping with traumatic events.

“Regardless of the uniform we wear, we are all affected by trauma and we need to have a conversation about it,” Tetrault told the assembled crowd. “We can no longer accept ‘I’m OK, I’m good’ when we ask someone how they are. We can’t accept that as an answer when we know our loved ones or co-workers are not OK. First responders are not bulletproof in any way, shape or form and we need to support each other.”

The idea that all first responders, male or female, are tough and can take it, or can just shake it off, is not true, and Tetrault said the effect of cumulative daily stressors in any job can take their toll on people. Feeling free to talk about and ask for advice and help in dealing with trauma and stress, he said, is key to healing and coping with stressful jobs.

“PTSD is not a life sentence. It can be treated and you can come back from it,” he added. “I challenge us all to have those conversations with people that we know are suffering and let them know they are not alone and help is out there.”

Jill Johns with the Probation and Parole Office made the services she deals with daily aware that June 27 was PTSD Awareness Day, and Tetrault said they thought it was a great opportunity to bring attention to PTSD and those living with it and suffering silently.

“I can speak from the policing viewpoint because that’s where I come from for 27 years, but we were always told back when I started in Windsor, if you have a bad call, just go to the bar and forget about it but that was never good; not then and not now,” the veteran officer added. “We are all human beings, we all hurt and we are all affected differently by trauma and we need to talk about that because ultimately, that is what will keep us healthy – talking about it, acknowledging it and then getting treatment if we need it.”

Christine Beintema, Vice-President of the Probation Officers Association of Ontario, was at the event and said the definition of first responders is expanding to include all frontline workers who deal with trauma and stress daily, including parole and probation officers, correctional workers, and hopefully in the future crown attorneys, nurses, doctors, counsellors, social service and mental health workers.

She noted that probation officers deal with people who share their trauma, fears and frustrations with them daily, including some who act out against them, and they absorb all that trauma from clients and victims with nowhere for it to go.

Beintema shared an anonymous quote she once heard that really stuck with her: “We shouldn’t have to break ourselves into pieces to keep others whole.”

As Tetrault noted, PTSD started with war veterans and it’s always been there. They were encouraged to tough it out, rather than acknowledge there was a problem, and that attitude can’t continue.

The relationship between first responders in Chatham-Kent is a strong one, according to the sergeant, and they reach out to support one other.

“We go to calls together and we get to know each other on a first-name basis, so we know when each other is working and what calls we will be going to, so we want to be there for each other. In light of PTSD, we’re also having those conversations with them because we are sharing those big calls, like fatalities where everyone is there and everyone is sharing it. We’re learning to emotionally debrief some of those incidents and we join together to do that,” Tetrault said. “We have a tight group of first responders here in Chatham-Kent and I’m really proud of that.”

Tetrault leads peer support for the CKPS and said all first responders and front-line workers need to get to the root cause of actions leading them to numb their pain through drugs or alcohol or other self-harm behaviours.

“When we avoid our root issues, we tend to compound our problems, so we make bad choices and we are tough on our families as spouses… and it some ways it masks what the root issue is. We think it’s an alcohol problem and in reality, it’s a PTSD problem that needs to be treated and can be treated,” Tetrault explained.

To help with the awareness day, the Optimist Club of Chatham-Kent partnered with the service associations to offer a free barbecue lunch, and Optimist Steve Tuinstra said they were happy to donate their time and some resources to help Chatham-Kent’s first responders.

“It’s always great to come out and help support our emergency services. They do so much for the community and you don’t realize they may be dealing with a stress disorder,” Tuinstra noted. 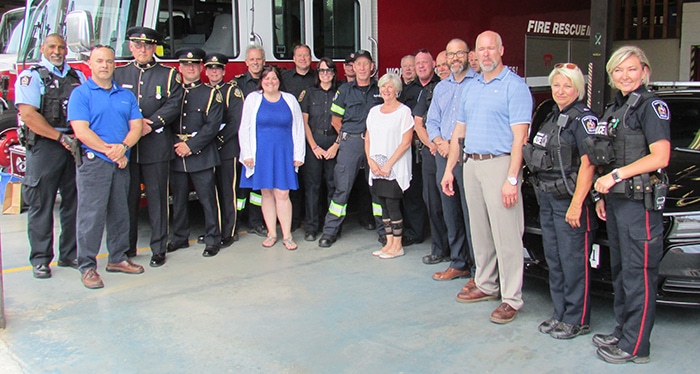