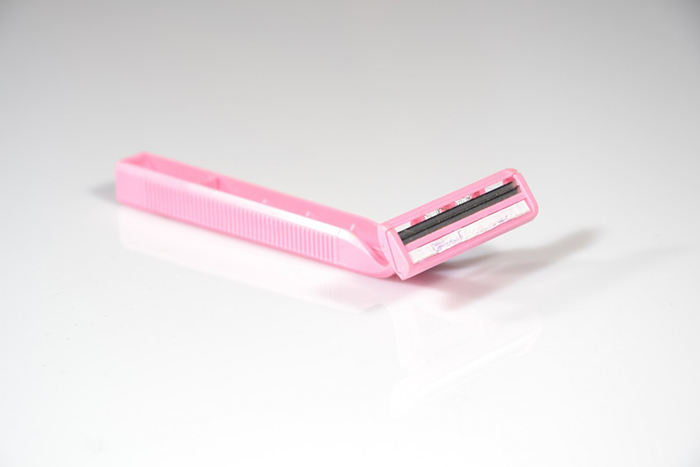 Here’s what happens when you are 54 and forgetful: You wind up using your daughter’s shaving cream … on your face, not your legs (although if you do your legs, that’s cool too).

My daughter recently came downstairs to show me the cause of a mysterious hissing sound in our upstairs bathroom – my can of shaving cream.

I use an electric razor during the week and resort to a blade on Monday mornings after I don’t shave on a weekend, so that can was there for years in the medicine cabinet.

It sprung a leak and let out a lot of foam, much to Brenna’s laughter.

But I forgot to pick up a replacement can. That meant on a recent Monday morning, with my whiskers in need of some blade work, I had to reach into the shower and grab Brenna’s can of Girly-Girl Shaving Cream, or whatever it’s called.

Fortunately, only the cat was awake as I smeared pink lather over my face.

It worked great. Not sure if my skin felt any smoother or better moisturized, but it smelled girlier.

My sister-in-law Jane donated an electric snow thrower to me when she moved out of her house into a nice apartment in December. It sat under a tarp … until the big storm recently.

I pulled it out and fired it up, and the unit worked wonders.

I have a couple of minor complaints, however. Like pretty much any walk-behind device with a handle on it, that handle is designed for shorter people. My back got tired (not as tired as it would have been through using a scoop to shovel all that snow, however).

The other complaint is it doesn’t account for driver error. As I cleared the snow from around our garbage can, I buzzed one wheel a bit with the blades on the snow thrower. Oops.

And then there is the matter of blowing snow into a wind. I tried to lower the chute as much as possible, but Mother Nature took great glee in firing the snow right back into my face.

My wife, Mary, popped outside as I stopped to give our kid a ride to a friend’s place. She just stared at me. I must have looked like the abominable snowman!

She had to help brush me off before I got in the truck.

We’ve all heard of people complaining about barking dogs. How about meowing cats?

OK, not a complaint, but a notification, actually.

As mentioned before, our cat is loud and makes odd-sounding meows. We received a call at work recently from a neighbour letting us know our cat wanted in. She knew Brenna was home, so figured we could relay the message to our daughter and she could let our cat inside.

Lynn, our neighbour lives across the street. She heard him clearly from her carport!

Finn is silly, and smart, but impatient. He’ll walk up to one of our entrances and meow quite loudly, demanding entrance. If we aren’t there immediately to let him in, he’ll move onto the next door, and then onto the third.

Usually after that, he’ll wander off and repeat the process later, when someone’s home.

Sometimes, he’ll hop up onto the ledge and peer into the living room window. He may not want in, but rather just wants to see what’s going on.

This is the same cat that will run out the side door in the morning, only to run around to the back of the house and meow to get inside.

It’s like he just wanted to test the temperature and get a sniff at the air that morning.