The reality of human trafficking in Chatham-Kent hit hard for the 600 plus people who attended the town hall meeting hosted by Chatham-Kent Leamington MPP Rick Nicholls at the John D. Bradley Convention Centre in Chatham Thursday night.

Representatives from area police, victims’ services and related agencies joined a human trafficking survivor in explaining the reality of young women, and men, who are forced into providing sex services for their pimps along the Highway 401 corridor.

Statistics presented to the woman, men and teens in the audience showed that 93 per cent of human sex trafficking victims in Canada are Canadian-born, with an average age of 14. And Hwy. 401 in Ontario is a major corridor where traffickers will drive girls to different cities along the highway and force them to service men for a couple of days before they move on to the next city.

The girls are told what to wear, where and when to eat and sleep, if at all, have their ID taken away, and threatened with physical violence to them or their loved ones if they disobey.

Chatham-Kent Police Service Const. Meredith Rota and OPP Sgt. Kim Miller, both involved in anti-trafficking in the region, explained to the audience that trafficking isn’t just girls from other cities, happening somewhere else – “it is happening right here, to our girls, under our noses.”

Miller explained the most well-known method of trafficking a victim starts with targeting vulnerable young girls, called the Romeo/pimp method. She said the recruiter will learn all about the girl from social media, or through watching her habits and then befriend her, telling her she’s pretty, buying her things and selling her a romantic fantasy. Then he will isolate her from her family and friends, and once he has her convinced it’s love, he will tell her she needs to just do these sexual favours so they can have the life they want.

Before the victim is even aware, she is servicing clients daily and if she tries to get away, she is punished or her family threatened.

Rota said recruiters, who can be male or female, use several other methods including befriending girls on social media or dating sites, gaining their trust and confidence to get the victim to reveal all the personal information a pimp would need to control her.

“Kids post everything on social media, so the pimps know everything about them,” Rota said. “It used to be our kids played in the backyard and we could look out the window and see them. Now the world is our kids’ backyard and they are incredibly accessible.”

She relayed in one situation, a young girl left her pimp and he took a picture of himself with a gun and sent it to the girl’s father demanding a $10,000 exit fee. Rota said the pimps collect all the information they need to intimidate and control their victims.

In one video Miller showed the audience, a young woman was interviewed by the Toronto Star with a heart-breaking story of being trafficked for sex, using drugs and alcohol for emotional escape, and the final indignity – when she didn’t answer the phone when her pimp called, he tracked her down, slashed her Achilles tendon and left her beside some garbage. She survived, but has to struggle daily to overcome the trauma of what was done to her.

According to Meka Cedar, with Chatham-Kent Victims’ Services, who was also a speaker, her agency has helped 12 victims of human trafficking, and seven of those victims were born and raised in Chatham, the youngest being 16 years old.

All the speakers made the same point – human trafficking is happening here in our community and our children are vulnerable. Chat rooms, social media, parties, group homes, the mall – recruiters are out there looking for the most vulnerable and easily manipulated victims.

“Education and awareness is so important,” said Miller. “I’m so glad to see so many parents here with their teens.”

To help put a face to the second most lucrative crime in Canada behind drug trafficking, guest speaker Jen Devoe, a trafficking survivor from Windsor, told her story of being a young teen who was bullied and marginalized. She turned to acting out and drugs, and after two children and a marriage that ended, she was lured into a gang, tattooed as gang property and forced to service clients.

In the end, she was sleeping on a gravel floor in a basement with only a blanket and a cat for company, with no hope she could find a way out with no money, no support and no identification.

She finally took a phone number from her addictions counsellor, decided she had nothing to lose, and called a woman who got her out, hid her from the gang, and then got her out of the area to a facility in Windsor, where it took months for her to lower her guard enough to accept help.

After a standing ovation, Devoe said her life is good now, she is back in touch with her two children and she works helping other women and bringing awareness to the issue of human trafficking.

One question brought up at the town hall was the need to educate the men, and women, who buy sex services, creating the demand for sex workers and providing a lucrative income for organized crime and gangs who traffic the victims.

Miller said the OPP has a brochure they are circulating reminding men that these girls may not be there by choice, may be under the age of 18, may not be eating or sleeping and are someone’s daughter or sister.

“To the trafficker, these girls are a product, not a person, and he is making money over and over from the same product,” Miller said, and the people who buy their services don’t see the individual, but rather someone they are paying to provide a sex service.

The high demand for sex services is shocking, and Miller said from one sting operation that had the OPP placing an ad for the services of a young girl, they received more than 9,000 responses in just six days, and even after the sting was shut down, they continued to receive inquiries.

Make sure you know who your children are talking to, friends with and what they are doing online. Secretive behaviour, new friends, new purses or clothes, fear for loved ones, drug use – all these can be signs that parents should be aware of and look for. Have a conversation with your teens about staying safe, keeping personal information to themselves and trusting their gut if they feel something is off about a person they are talking to.

For more information on human trafficking and how to keep your children safe, go to www.opp.ca or the CKPS or for help for victims, call Chatham-Kent Victims’ Services at 519-436-6630.

If you believe you have information about a victim or a pimp and wish to remain anonymous, call Crime Stoppers at 1-800-222-TIPS. 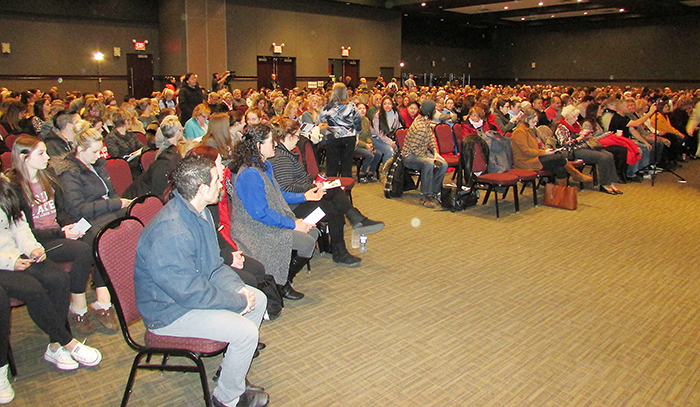