Shop with a Cop became so successful in Chatham-Kent that it outgrew its name this year.

Holiday with a Hero replaced the original event, as personnel outside law enforcement teamed up to help 130 children shop for Christmas on Saturday morning.

OPP Const. Jay Denorer, one of the event organizers, said it is never a problem getting willing volunteers for the event, except for the fact they run out of bodies as officers have had to work.

“They love it,” he said of the participating personnel. “The ones who are working and can’t be here, they’re the ones missing out. We just needed more heroes.”

This time around, the participating children were picked by local schools. The focus was on children who had suffered a form of tragedy over the past year.

“We just left it up to the schools to pick. But they are all children who have suffered traumatic circumstances,” Denorer said.

They included Ebony Vandenbogaerde, who had tumours on her spine removed earlier this year and is now paralyzed from the waist down, as well as one lad who lost his father this year while the man was out helping others.

Denorer said the father was a tow truck driver. He suffered a heart attack on Highway 401 changing a tire near Tilbury.

Not only was the boy part of this year’s Holiday with a Hero, but Chatham Towing was to show up to take him to the gift-wrapping portion of the day in their flatbed tow truck. The kids normally travel via school bus from Wal-Mart to the Bradley Centre, but Holiday with a Hero organizers wanted to make a special change for the boy.

Each child who participated with the event had a $100 gift card – donated by local businesses, organizations and individuals – to spend at Wal-Mart. Some completed their task in about 10 minutes, while others browsed the aisles for the better part of an hour looking for the perfect gifts.

Denorer said at checkout, the staff at Wal-Mart covered the HST.

“The Wal-Mart employees get together and cover the sales tax portion,” he explained.

Children from across the municipality took part, including 20 from Moraviantown.

This marked the fifth year the event took place in Chatham-Kent. The concept was brought here by OPP Sgt. Brian Knowler.

It began with 25 kids the first year and reached 100 by last year before growing to 130 this time around.

The goal of ‘Holiday with a Hero’ is to break down barriers between young people and emergency services personnel, with the intent of developing a better and more trusting relationship with those in uniform. 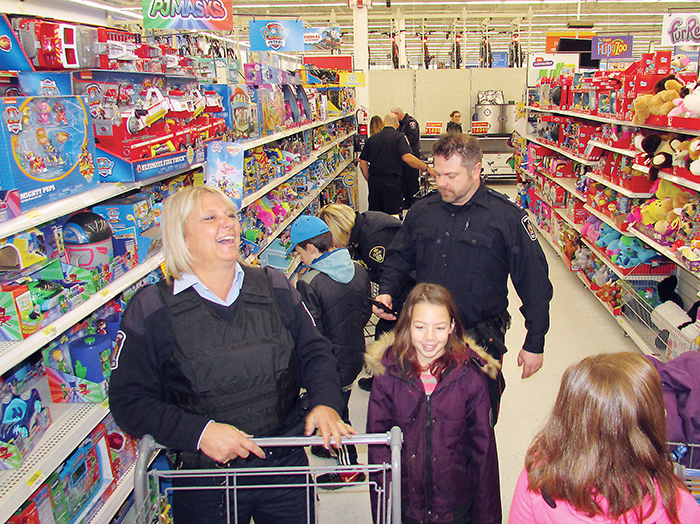