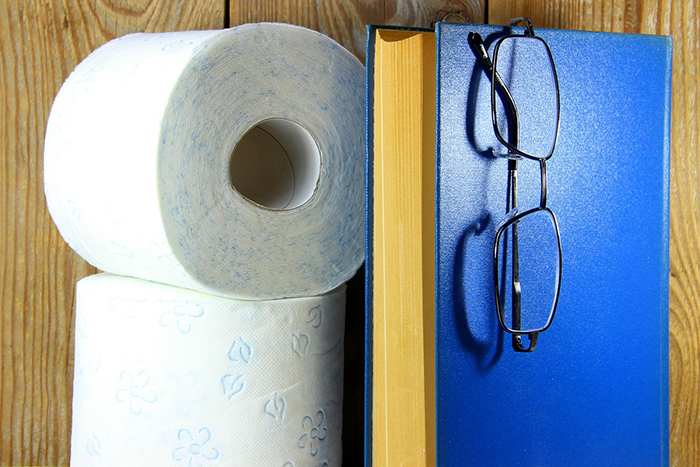 OK, you know in movies, you see a gag skit where someone has toilet paper stuck to an article of clothing or an accessory? Think Jackie Gleason in Smokey and the Bandit when he emerged with a long line of toilet paper attached to his sunglasses.

Well, that does happen in real life. Trust me, I know.

I was the gag, but no one in our house, not even the cat, was around to laugh. It happened in the middle of the night recently.

As most readers know, I spend about half my night sleeping in a recliner due to joint issues. As I transitioned to bed one night, being over 50, I had to make a pit stop in the bathroom before continuing down the hallway. As I groggily sauntered down the hallway, I heard an unfamiliar sound; some fabric was brushing on a surface. I was carrying a shirt with me, but that wasn’t it.

I turned around to see a line of white going from me back to the bathroom door. It turns out, I’d caught the end of the toilet paper in the waistband of my shorts.

I couldn’t help but laugh as a trudged back up the hall and rewound the toilet paper onto the roll.

The next morning, Mary Beth asked if the cat had been playing with the toilet paper again.

No questions, just the knowledge that her oddball husband had done something strange in the middle of the night involving toilet paper.

Yep, it was cancer

So, I’m sitting at home about 6:30 p.m. on a weekday night last week when my cell phone rings. It’s my doctor.

She called to confirm the lesion she cut off my chest was indeed basal cell carcinoma – cancer.

It’s what I had guessed (and why I showed it to her in the first place). It was a bump and a lesion that didn’t seem to ever heal and caused discomfort when pressed.

Doc Munro advised me to use sunscreen and to watch out for possible other signs of basal cell carcinoma.

This is my second such tumour removal. Fortunately, this form of cancer is extremely slow growing and only very rarely moves from its initial location.

As for the sunscreen, I joked with the doc that it was on my chest and my dad bod plus doesn’t exactly receive much exposure to the sun, other than for my annual farmer’s tan (catch me with my shirt off in the summer, and it looks like I’m wearing a white T-shirt). But she said the placement of the lesion on the upper chest was in an area where a golf shirt would leave the skin exposed, and it’s typically in a spot where people don’t think to apply sunscreen.

Sound advice from the doc, especially so at 6:30 p.m. My doc makes house calls after hours! So what if they’re phone calls? Kudos to her for her compassion for her patients.