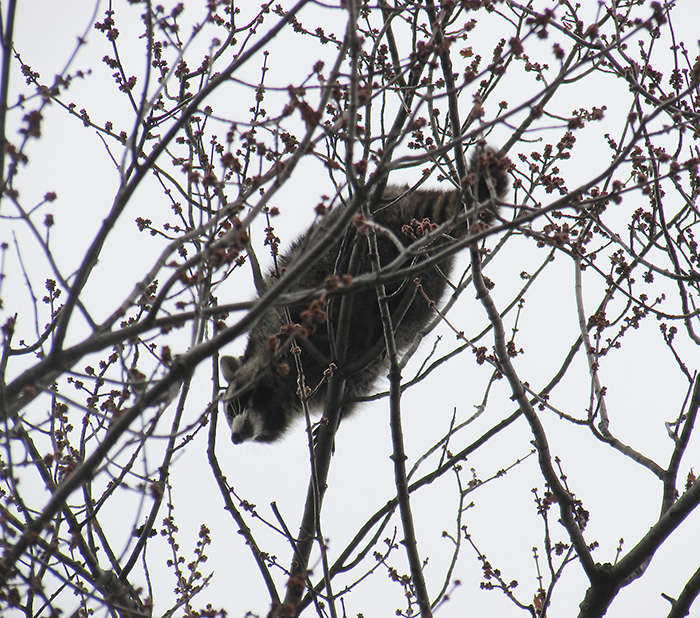 A raccoon infected with canine distemper was trapped in a tree on a property on Colborne Street East in Chatham late last week. Disoriented and sick, the animal spent four days walking back and forth on one branch before falling out of the tree. It was trapped Sunday and humanely euthanized.

One Chatham man, at his wit’s end trying to get help to remove a sick raccoon from his property on Colborne Street, said something needs to be done to take care of the problem.

Marc Dumay went outside on his front deck last week with his dog, and a raccoon was sitting on the deck; it showed no fear of either of them. Back inside, Dumay said he checked periodically and noticed the raccoon had climbed a large tree in his front yard and was wandering around the branches and appeared disoriented.

Fearing for his dog and neighbourhood children, Dumay said he called animal control and was told they were contracted to pick up stray dogs, but would only pick up wildlife if they had the volunteers and the resources to get the animals.

He said the animal was in the tree for four days before it finally fell out. Dumay said he was able to safely trap the animal Sunday and took it to PAW, the local animal control and shelter facility, to be euthanized.

“This is something that needs to be addressed. We’ve advanced enough as a society that we don’t need to see animals suffering,” Dumay said. “The little girl next door was in tears seeing the raccoon in the tree suffering and nobody doing anything to help.”

According to Suzan Ritchie at Hope Haven Wildlife in Merlin, some raccoons in the area have been infected with canine distemper, a disease which affects the animal’s brain and causes it to appear shaky and disoriented. She noted the problem has become widespread and is being transmitted to raccoons from stray dogs infected with the disease.

“The disease is not curable. You can’t trap and re-locate these animals. They need to be captured humanely, taken in and euthanized, and disposed of properly,” Ritchie said.

It is important to note the disease cannot be transferred to humans, and pets should be safe as long as they have up-to-date shots from their vet. All bites from any animal, however, need to be reported to the Public Health Unit.

She noted, however, if a person’s pet has an encounter with an animal that may be sick to take it to the vet for an exam and booster shot.

Ritchie has received numerous calls about sick raccoons, but her mandate is to take in sick or abandoned baby wildlife, rehabilitate them and send them back into the wild.

Police have also been receiving complaints about sick raccoons, according to Const. Renee Cowell of the Chatham-Kent Police Service.

“This month, we’ve received 12 animal complaints involving raccoons across Chatham-Kent. In most cases, the animal was gone upon our arrival or relocated. In four cases, the animal was destroyed by officers for public safety reasons,” Cowell said. “We encourage residents to leave wildlife alone as in most cases they will leave your property.  If they do not wander away, you may call a commercial pest control company for assistance. If the animal appears injured, sick or poses an immediate threat to human safety, we will send an officer to ensure the safety of everyone in the area.”

PAW, which is contracted by the municipality for animal control to pick up stray dogs, does not have the resources or the manpower to also pick up sick or injured wildlife, according to PAW manager Myriam Armstrong.

She said her office also received numerous calls recently about the sick raccoons wandering in people’s yards, something that seems to peak in the fall in Chatham-Kent.

“We have limited resources and when we have the volunteers and the gas money to go out, we do,” Armstrong said. “We’ve already been out this week six times.”

Armstrong said if a homeowner is able to humanely trap the animal, they can bring it to the PAW office on Park Street where it will be euthanized and disposed of.

She recommended ensuring pets or children do not touch the raccoons, which only appear tame because they are ill. She added that dogs are safe as long as they have been vaccinated against canine distemper.

The Ministry of Natural Resources, according to its website, will not take care of sick or injured wildlife and recommends hiring a trapper to take care of removing the animal. The Alymer MNR office did not respond to further questions about the prevalence of sick raccoons in Chatham-Kent by press deadline.

Dumay said the municipality should be looking at the problem, and communicating better with the public so they know what to do and which agency to call to get some help.

Dumay said, as a marksman, he could have shot the raccoon to ease its suffering and get it out of the tree, but discharging a weapon in the city is against the law.

“I realize this may be low on the priority scale for council, but a lot of people donate money to the shelter and you would think its purpose would be to benefit animals and make sure they don’t suffer needlessly,” Dumay said. “Even if they hired a hunter to shoot the sick raccoons in trees with a gun or even a bow, or the police fired bean bags to knock them out of the tree, it would have saved several days of suffering and a fall from the tree.”

Dumay is hoping the municipality will have a discussion with all the agencies involved so a plan can be drawn up to take care of the sick animals humanely and quickly. 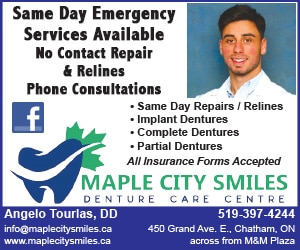