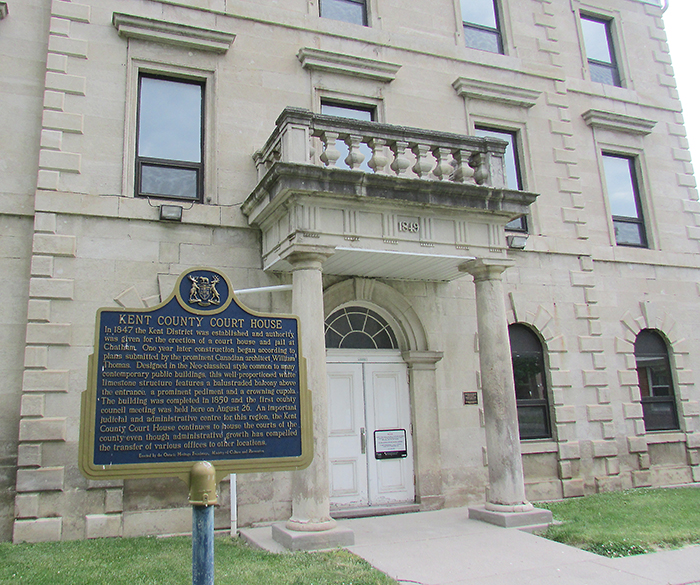 While its future still isn’t known, the former Kent County Courthouse and Jail historical building is now in local hands.

According to local realtor Carson Warrener, his family purchased the building after the province put it up for public sale for an approximate $1 million price tag.

The municipality was offered the property to purchase, but passed on it.

The former Kent County Courthouse and Jail building, built in 1849, was designated a heritage building by Chatham-Kent council in 2003, and was closed in 2014.

“We own similar buildings in the downtown vicinity and it’s always been on our radar as a significant historic building,” Warrener said in an interview with The Voice. “Over the last 11 or 12 years, as they moved the courts out and then more recently moved the corrections facility out, it was pretty obvious it was going to become surplus so we were watching and listening, and then it did come up.

“It’s not that it’s really something we needed; but you never need a historic building,” Warrener joked, “But the community definitely needs them from the historic preservation side of it.”

The original jail building is made of white limestone. Of historical significance and interest is that Canada’s second prime minister, Alexander Mackenzie, worked as a stone mason on the project when he first came to Canada looking for work. It is also one of only four remaining buildings in Chatham that predate 1860.

The Warrener family, led by patriarch Dan, are known in the community for purchasing historically significant buildings and re-purposing them for community or private business use. One example is the former Chatham Armoury beside Tecumseh Park, which now houses businesses and is used as an event centre available to rent by the public.

“The municipality has the first right of refusal and they obviously passed, so that allowed it to go to the open market. There was quite a bit of interest from other folks, so we were pretty quick to get an offer in and get that process started,” Warrener explained. “The big question everyone has is what are your plans; what are you going to do?”

He said his family doesn’t have a plan yet, as they need to learn more about the building, which is unique historically as well as architecturally, with the courts and jail in one facility.

“Some areas you could use today pretty much, but there are others I’m not so sure you’d even want to go in them right now,” Warrener noted.

Chatham-Kent newly elected councilor and retired police officer Amy Finn said the news the Warrener’s purchased the building is positive for the community.

“I think it’s great,” Finn said. “You can do tours through there. I don’t know what he has planned but it’s our heritage. You’ve got the superior court room up there that is just beautiful.”

She said she has visited former jail sites in other communities that had historic tours and even hotel rooms.

“I’d be very interested to know what they have planned. I think it’s wonderful the building has been sold to someone in the community who really cares. They don’t want it to go to trash; there is a lot of history there.”

The main courtroom of the building has a large stained glass ceiling piece that is unique, and Warrener said the panel behind the judge’s chair also makes the room very interesting. He said it would certainly be a focal point.

“Coming up with a use for it will be interesting, as the building wasn’t built to be accessible, so that poses a lot of issues for use, and zoning is a bit of an issue as it is in a residential neighbourhood,” Warrener mused. “Something will make sense; it will just take some time. We will work with the community, and we’ve worked with the municipality on lots of projects. We’re pretty open communicators and we find that is usually the best method of connecting the pieces and coming up with something that will help protect the building.”

The biggest issue, he said, is that the building has no use right now and requires extensive renovations before the use can be changed. The courtroom will most likely be the first area they will be able to come up with a use for to generate an income stream. They also need to keep the building from falling into further disrepair.

“The change of use is the real big encumbrance of any big building and it was engineered as a corrections facility. You can’t just go in and use it as something else, so that’s a challenge,” he noted.