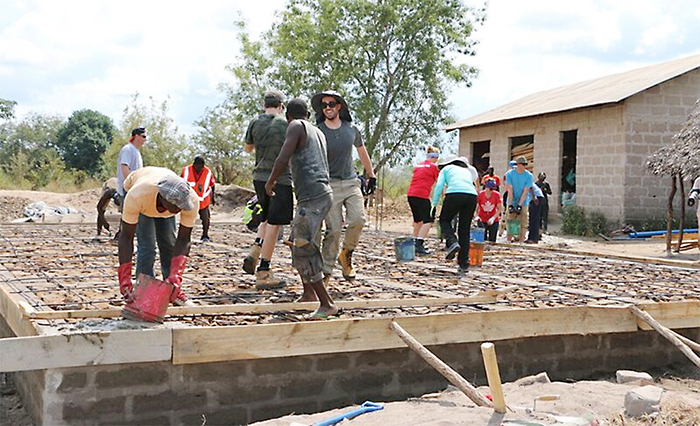 The giving nature of Chatham-Kent reached thousands of kilometres away this past summer, as a group of 13 adults travelled from Chatham to the two small villages in Tanzania, Africa.

What they gave was priceless and what they received in return was just as valuable in their minds.

Trisha Brinkman and Dale Elliott, two of the people who went to Tanzania from July 24 to Aug. 15, said they had the experience of a lifetime, while spreading goodwill and needed supplies.

Prior to leaving, the group conducted fundraisers, including a run, to help pay for the trip. Emmanuel Baptist Church and St. Paul’s Congregational Church covered a third of the cost, the fundraising covered another third, but participants had to pay for the other third.

The group chose Tanzania, specifically the Rufiji River region due to a Chatham connection: Graydon Baker. He’s the son of former Emmanuel Baptist Church pastor Rick Baker, and he grew up in Chatham-Kent.

Baker has been there for more than six years. He opened his own Safari business, Baker and Sons, and started the East Africa River Mission.

Brinkman said as Baker was establishing his business, he noticed the need for more in the region.

Baker has been back to Chatham since starting the business and the mission, including about a year ago.

He spoke to the congregation at Emmanuel, and Brinkman said that’s when the local group started planning a trip to help.

“When Graydon was in Chatham and spoke at the church to let them know what was going on, a group of us wanted to help,” she said.

They raised about $120,000, partly to pay for the trip, but also to buy supplies to deliver to the people living in squalor in the Rufiji River region.

Brinkman said the local support for their efforts was off the charts.

“Chatham’s so great. You have different causes and different people get on board. It’s so great to see,” she said.

Brinkman said the outpouring of support was a near-daily experience.

“Bags of shoes would be left on my porch. I’d put a Facebook message out looking for mini (hockey) sticks and I’d have more than I asked for,” she said. “It was amazing.”

The trip did not come without its share of hiccups. The first was a last-second need for an unexpected vaccination, Elliott said.

“About five days before leaving, we found out we had to have Yellow Fever vaccines. We had to scurry to Dr. (David) Colby and get the vaccines,” he said.

Brinkman added not every physician can give the shots.

With the vaccinations out of the way, the group flew 13,000 kilometres away, on three flights, taking 17 hours to get to Dar es Salaam, the capital of Tanzania.

At that time, 11 p.m. in the evening, and extremely jet lagged, the team went through another surprise.

“It’s quite interesting. When you arrive, you hand over your passport and a $50 bill,” Brinkman said. “You wait around until they call your name, but you don’t understand it because it’s in Swahili.”

Still, they managed, and found the transportation Baker had arranged, and were taken to a Salvation Army compound about an hour away from the airport where they spent the night.

The next morning, they bounced and jostled their way across the country for about eight hours until they arrived at the safari lodge.

“It was very bumpy and super dusty,” Brinkman recalled of the drive.

Elliott said although it was “winter in the Tanzania, the weather was as hot as our summer.”

While in country, the Chatham group worked in two villages, Mloca near the safari camp, and Nogorongo a little further away. It was in the latter village where they helped build a home for a local pastor, his wife and seven children. 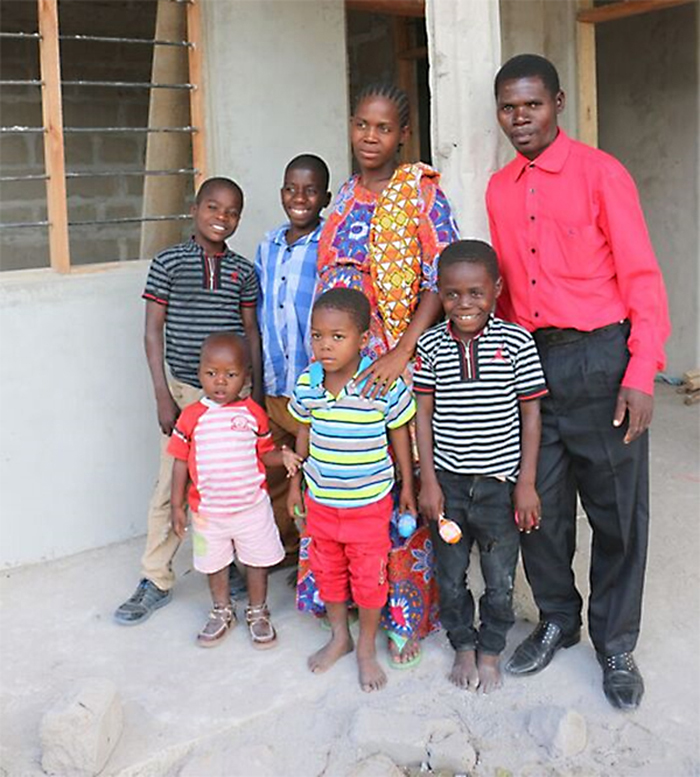 “They were living in a straw hut,” Brinkman said. “One of the reasons we were there was to build a concrete house. A team of Africans helped us build the house.

“We became the grunt work. The Africans we worked with were the real tradespeople,” he said.

But the work done was quite rudimentary. Brinkman said one job was to make the concrete bricks which would make up the walls of the new home.

It was all handwork. Hauling sand, concrete mix and water was done by bucket brigade. That was also true of pouring the concrete floor for the house. 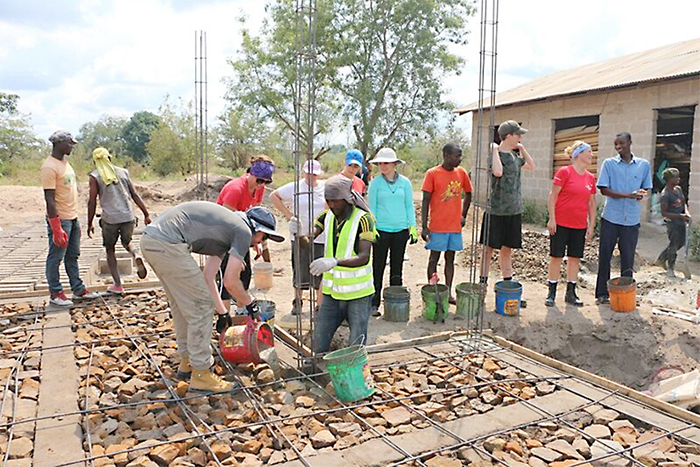 “We were making the bricks, pouring the concrete floor with concrete we made on site. There were no wheelbarrows,” she said.

Elliott said there was only one form for the bricks as well, so the work was slow.

The pastor was very appreciative of the work, Elliott said.

“He said, ‘I can never repay you financially for everything you’ve done for my family. I can give you some chickens and eggs and the old sign for the church,’” he said. “It moved a lot of us to tears. It blew me away. There was genuine love that came from both pastors to the team.” 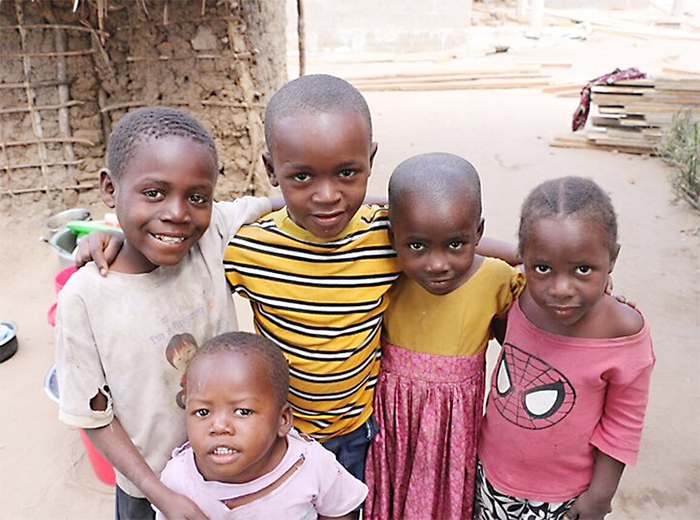 Other work done by the Chatham visitors included running English classes at a local elementary school, helping do crafts and more.

“We did a session with each grade and we did songs with them, did games with them did crafts with them,” Brinkman said. “We gave out some of the items we brought with us. The Grade 4s got toothbrushes; the Grade 8s got mini (hockey) sticks. We had a game of hockey on the school ground. We had such a great time.”

A student’s ability to learn English is ultimately what determines their chances of prospering in the country.

Elliott said it all happens in Grade 7.

“We found it interesting the value of learning English in their culture. The children have to take a test in Grade 7. They need to pass the test because all of their secondary school education is in English,” he said. “If they don’t pass the test, they don’t go to high school and can’t go on to university.”

The Chatham group also left clothing, shoes and small medical supplies with the two churches, Brinkman said. In fact, six pieces of luggage were filled with just shoes. And the best way to distribute, Elliott said, was through the churches.

“The need is so great over there, you would just be swarmed. We gave the items to the churches to be distributed over time,” he said.

Elliott said the Chatham team was “fairly spoiled” while over there, staying at the safari camp and enjoying running water. They still had some close encounters with the local venomous fauna.

“My wife (Karen) was doing some laundry in the sink in our room. She thought she was stung by a bee, but it was stronger than a bee sting,” he said.

Instead, it was the sting of a scorpion. It caught her on her thumb, but her arm swelled up to her elbow, he said, and went numb for about 24 hours.

Elliott added the security guards at the camp found and killed a deadly puff adder snake at one point, and a black mamba snake was spotted in the camp on another occasion.

“We would find scorpions in the kitchen in the sink. In my cabin with about four other people, one dropped out of the ceiling about two feet in front of me,” she said.

But ultimately the scariest moment for the team occurred when a vehicle transporting half of them broke down on the way home one afternoon. They walked to a nearby village and were greeted warmly by the local schoolmaster, but Elliott said two men in the village “wanted to take advantage of our group by taking us to another part of the village and charging us a fee.”

That never happened as Baker arrived with another vehicle to ferry them home.

“Essentially they would have been kidnapped,” Brinkman said.

But by and large, the people they met were extremely kind and loving, she added. 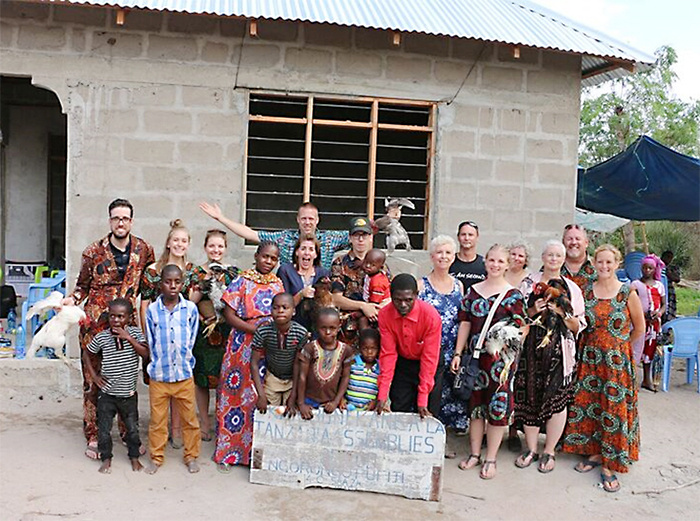