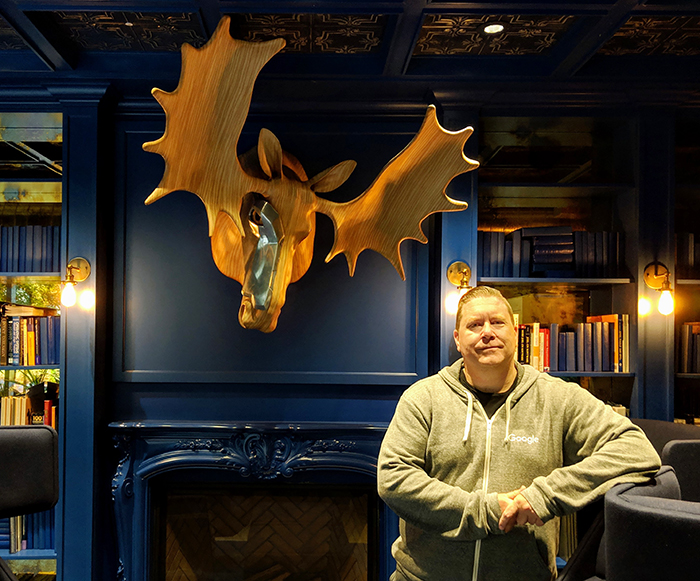 This September marks 20 years since two Stanford Ph.D. students launched a new search engine with a bold mission to organize the world’s information and make it universally accessible and useful.

Google has changed a great deal in the intervening years, with tens of thousands of employees and seven products that are used by more than a billion people every month.

In Canada, Google has been a presence since 2005, with new offices opening up in Kitchener-Waterloo in 2016.

One Chatham native calls those offices home, and for Googler Shawn Wallace, whose official title is Technical Lead for Google Cloud, home is amazing.

Born and raised in Chatham, Wallace graduated from Ursuline College in 1991.

“While I was in high school, we didn’t actually have a lot of tech classes but at that time period it wasn’t as popular as it was now. It was more people learning on their own,” Wallace explained. “When I was four years old, my parents bought a computer and that was pretty much the beginning and the end for me.”

Attending university for computer science, Wallace earned his Masters in software engineering and said his path to his current job at Google Canada was not “linear” but he is very happy to be where he is now.

“It’s amazing. One of the things that I really love about Google is that we actually have the opportunity to impact people’s lives in a very tangible and meaningful way,” Wallace noted. “We have hundreds of millions of customers – people who use our products from business to education to personal use – and we can do things that improve people’s lives.”

In the early days of his start at Google, Wallace said he learned right away that from the leadership on down, the company is constantly looking at ways to reinvent things and how to be better.

At the Kitchener-Waterloo offices, there are many perks of the job, according to Wallace, that the people who come on tours are shown. And without a doubt, he said those perks are incredible.

“We get a bed, three meals a day from some of the most amazing chefs I’ve ever met, there’s a gym and there’s a lot of things. And those are great, don’t get me wrong. But really, the greatest thing here is people really treat each other with a lot of respect. You never feel like you’re just a cog in the wheel, you feel like you’re important,” Wallace said. “And if you have an issue, there are a lot of people who actually care about it.”

At a time when tech is taking the bulk of the blame for removing personal, face-to-face interaction and causing a disconnect between people, Wallace said Google maintains an emphasis on personal interaction between employees not only in the same offices, but around the world.

“We do a fair bit of face-to-face. I actually fly all over the world to Google offices to give people help to build software,” Wallace said. “A lot of companies wouldn’t support that sort of activity because there is a cost to it and they can’t see the value of it, but Google really does.”

A video conferencing system created by Google is used by employees all over the world to link up to see each other and get that extra context you get while face-to-face.

As a Googler, Wallace also uses his work experience as a mentor in the community, where he works with a high school competitive FIRST robotics team at Kitchener-Waterloo Youth Robotics. He said his employer is very supportive of that, sponsoring the team and giving them space to work in for free.

“We spend a couple of months each year building a robot, and then a couple of months competing with it, and the rest of the year, we do outreach at schools and libraries and events, just sort of showing the community these amazing robots and people are always super impressed. And then we tell them it was built by high school students,” Wallace said. “They almost don’t believe it.”

He said these kids go on to do really amazing things after participating on the team, doing things they wouldn’t even have been doing in Grade 12. Wallace said he initially got involved in the team because of his son’s interest and really enjoys helping the students grow and learn.

“One of the things I really love doing is mentoring people. I find I get a lot of satisfaction out of watching people grow over the years and getting better at what they love to do. It’s pretty amazing,” he enthused.

As for advice for up-and-coming students interested in computer science, Wallace said while his path to his Google job wasn’t a direct one, that’s OK because he was “pursuing his passion.”

“I always tell people, find something that you love doing and figure out a way to make money at it later. And especially at a place like Google, that’s what we look for. We look for passionate people,” he said. “I can teach people to program in any language, but I can’t teach passion. If you don’t love doing it, then it’s just another job.”

Every day at Wallace’s job, he said he basically manages other people and it’s his job to keep his team “happy and healthy, productive and not stuck on something.”

He said he also is passionate about working on the lack of diversity in tech, as is Google as a whole.

He said lots of people are trying to figure out why the industry is the way it is and how to get to a place that is more representative of our population. People who design products, he noted, tend to make products they would like for themselves, so if everyone at a company has the same background, they tend to design products that meet those backgrounds, ignoring a large segment of the population.

“At Google that’s not something we strive to do. We want to make things sensible to everyone,” Wallace noted.

The company has made strides towards diversity, putting out an annual report on their progress each year.

One thing Wallace said he wanted to emphasize about Google is how much they care about their users.

“I wish everyone could see from the inside just how much people here care about our users. There can be the perception that Google is just a big corporation, which I guess it is, but the people here care very, very deeply about our users. We care about their privacy and we care about their happiness. Our people work very hard to make everyone happy, and unfortunately from the outside looking in, people can’t always see that. I wish they were exposed to that a little bit more.”