The Chatham-Kent Children’s’ Safety Village (CKCSV) held its annual Farm Safety Day recently, unveiling a new safety program that is the first of its kind in Canada.

With the OPP, the CKCSV board showcased a new ATV simulator that will be used to teach ATV safety to children in Chatham-Kent.

Board Chair Gary Patterson said the project was started in response to concerns about the high number of ATV-related accidents and injuries occurring in this jurisdiction. With the help of MPT Inc., Applied Industrial Technologies and an actual ATV donated by Bob’s Motorsport, the project started in January after board members saw a similar project in New Mexico.

“This ATV simulator is the first of its kind in Canada, and thanks go to our project partners, who took just from January to August to get it done,” Patterson said at the unveiling. “There are a lot of accidents in Chatham-Kent with ATVs and we need to make sure children realize it is not a toy, it is still a motorized vehicle.”

The ATV simulator, demonstrated by radio personality Chris McLeod with OPP Const. Jay Denorer at the controls, simulates the motion of an ATV as it goes up hills or over logs, and teaches the riders to adjust their body weight so the vehicle is less likely to roll.

Children at the Safety Village camps will be taught safety with the simulator, which is portable and can also be brought to other locations.

Children using the simulator will be wearing proper safety equipment, and the OPP want to remind ATV riders that they must remain on private property unless they are a licensed driver over 16 on a designated roadway.

To further bring home to kids the dangers of improper riding of an ATV, police, ambulance and fire personnel staged a mock ATV rollover to showcase not only injuries that can occur, but also how first responders come together to assess, treat and transport accident victims.

During Farm Safety Day, several members of the agricultural community were on hand at several stations to teach safety with farm equipment, including Jordan Lesy with McGrail Farm Equipment, who demonstrated what can happen when you play around the Power Take Off (PTO) plug in at the back of tractor where the equipment is plugged in. PTO Pam, a mannequin stuffed with straw, suffered fatal injuries while sitting on the PTO when the cutting attachment on the tractor was fired up.

They also included safety around farm animals with TJ Stables, a barbecue lunch some farm safety swag to take home. 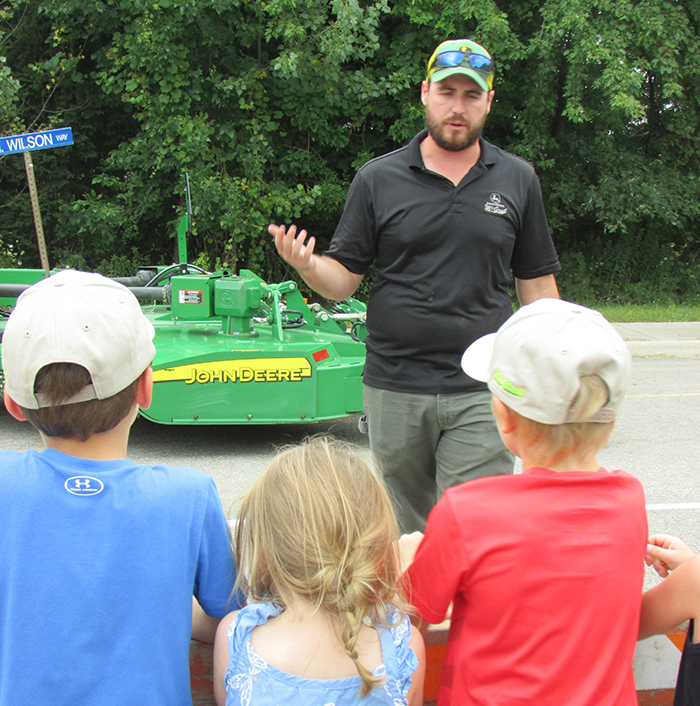