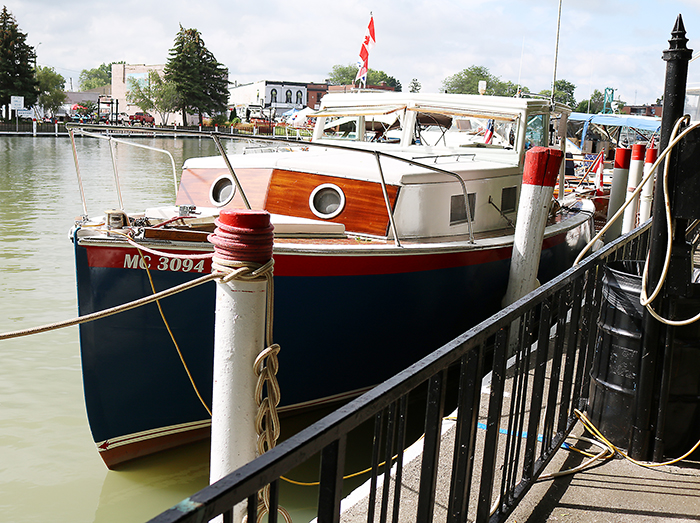 WAMBO may be turning 30 this year, but one thing never changes – praying for sunshine.

The organizers say everything’s ready for the 30th edition of the Wallaceburg Antique Motor and Boat Outing Aug. 10-12, and all that’s left is support from Mother Nature.

“There are only about 10 good weekends a year for outdoor events,” he said. “We’re praying for sunshine.”

As for preparation, Wolsing added the horde of volunteers have done a great job.

“We’re all locked and loaded,” he said.

The chair stressed it is the volunteers who make events such as WAMBO possible. There are about 75 who invest their time in helping to make the three-day extravaganza possible.

“All these people give a lot of their personal time towards this event. It’s what makes it so successful,” Wolsing said. “It’s incredible. It really is.”

The antique boats will likely begin to arrive Thursday night, but really start cruising up the Sydenham River in numbers on Friday. Many will take part in the boat parade that evening.

Wolsing said participants really like to decorate their boats for the parade. This year, the plan is to have the parade in the evening hours, so external lights could come into play.

He said the weather can have an impact on vintage boat traffic as well.

“Some of these people are so meticulous. Some don’t even bring them out if it’s raining,” he said. “Some of the older wooden boats are just beautiful.”

One thing that won’t deter boaters is the water level. Wolsing said in the past, when the water levels were much lower, some vessels just wouldn’t come up the Sydenham. But that’s no longer an issue.

While the boats are being showcased on the Sydenham River, the vintage automobiles will be headed out to Dresden and back Friday for their annual Terry Glover Memorial Cruise.

Wolsing said the cruise takes place from 5 p.m. to 9 p.m.

A special keepsake this year will be a hardcover book celebrating WAMBO’s 30 years, Wolsing said.

“It documents every year. Every poster we’ve had since Year One is in the book, with all the people involved each year in there too,” he said.

The book will be on sale at the merchandise booth near RBC on James Street, starting Friday afternoon.

As part of the 30th anniversary celebrations, WAMBO officials waived all fees for exhibitors this year, something they also did for the 25th anniversary, Wolsing said.

That should augment vendors for areas such as the antique toy and model show, art in the park, various craft tables and the flea market.

One area that always attracts the young at heart is the vintage fire truck display.

“Fire trucks are always a big hit with us. There is a whole section, old pumpers, aerial trucks. It’s a great display and the kids love it,” Wolsing said.

The fire trucks will also be on parade at 3 p.m. on Saturday.

Wolsing said there will be no shortage of food options for WAMBO patrons as well, with a variety of food vendors selling their savoury wares. Plus, the Knights of Columbus will have their Friday night barbecue, which starts at 4:30 p.m. and goes until they sell out.

The K of C folks will return to make breakfast from 8 a.m. to 11 a.m. Saturday morning as well.

In between, look out for a 50s and 60s show, karaoke, Ray Whaling performing Saturday afternoon in the refreshment tent, Mad Science and more.

“There is lots of entertainment all over the place,” Wolsing said.

One event that has quickly become a crowd pleaser is the cardboard boat race. Participants are armed with nothing more than cardboard items and duct tape, yet are tasked to build seaworthy vessels to compete in a race on the river.

Some are successful, some not so much.

The races take place at 1 p.m. on Saturday.

Soapbox derby participants will be back at it on Saturday, practising in the morning, and racing in the afternoon.

The lawnmower races that took place on Sunday have morphed into a lawnmower tractor pull. Wolsing said it’s actually a sanctioned event.

To help alleviate downtown congestion, WAMBO organizers will have people movers to pick people up from the Wal-Mart parking lot on McNaughton Avenue and transport them downtown and back.

It’s a busy weekend, made simpler thanks to extensive planning from the army of volunteers.