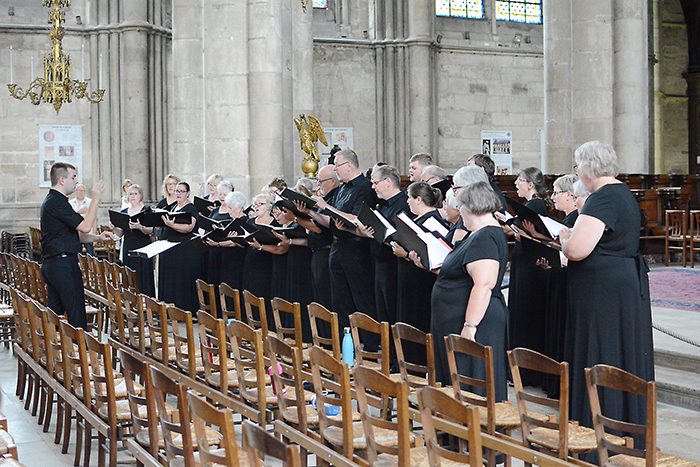 Devon Hansen, director of music, leads the St. Andrew’s Church Choir in one of their recent performances in France.

It was the trip of a lifetime for members of the St. Andrew’s Church Choir, who returned recently from a singing tour in France.

St. Andrew’s Director of Music Devon Hansen arranged the tour and opened the choir to members of the community who wanted to be a part of the experience, singing and exploring part of France.

The choir began rehearsing for the trip in January, and included both seasoned travelers and people who had never left the country.

“It’s a common thing, especially in the (United) States, to take choirs and tour them. There are tour companies that do this,” Hansen said. “I gave them an idea of what I had in mind and they sculpted the trip around it. I said I wanted to go to France, we wanted to do some of the war sites and we wanted to sing in some churches.”

Hansen said the company in Toronto crafted a 10-day trip that included both Juno Beach and Vimy Ridge, which made for a very moving and memorable experience.

“We got to sing at Juno Beach, which was really awesome,” Hansen said of the experience, which was emotional for the choir members. “The choir could barely keep it together. We sang outside and my back was to the beach but the members were facing it and you could just see the emotion.”

For the two church concerts in Reims and Chartres, they were a full half hour of acapella music, as no instruments were allowed. Hansen said singing in the cathedrals that were 600 to 800 years old was an incredible experience.

“The acoustics were unreal. When you stop singing and you still hear the sound for 10 seconds, that changes the way you hear things,” Hansen said. “There were a lot of tourists in the building and the churches did advertise the concert, so we were well received.”

At the Juno Beach Centre, run by Canadians on the beach, it was an all-Canadian program of remembrance which was a great deal of fun for the Canadian choir. At Vimy Ridge, the experience moved them so much, they spontaneously burst into a rendition of O Canada.

One part of the trip that was unexpected but very fun was being in Caen during the soccer World Cup, which France won, beating Croatia in the final.

“When we came back from Juno that day, all the streets were closed and the moment that they won, things just erupted, so that was an unexpected part of our trip,” Hansen said.

The trip was so successful that Hansen said he is considering organizing a trip every other year, and would like to do another one in 2020.

“It was a fun trip and really great to do music over there. They really love Canadians so make sure you have your Canadian flag on you,” Hansen noted. “The people who went were really appreciative because I think it’s a trip they would have never went on by themselves. Even if you are a traveler, the things we did were ones you wouldn’t do. We got to sing and those kinds of experiences are very powerful.”

For himself, Hansen has worked hard to bring community to his church and outreach music programs to not just church members, but youth and anyone who enjoys music in the community.

“I think I’m returning to the old school way of doing things. Back when a lot of the old cathedrals were built, they acted as schools back then and so they were really important beacons to the community to foster music,” Hansen said. “The more opportunities we have and the resources to plan a trip like this, everyone gets to enjoy that kind of thing. It’s allowing the community to do something they might not have been able to do.”

Bringing in symphonies and the Choral Scholar program are two examples of how Hansen is bringing music to the community through the church, and he said it is all part of his own personal growth as well.

“The more we can do that kind of stuff, the more our role is than just Sunday morning worship,” he added. “Music is a universal language.”

Hansen is busy now setting up the new Chatham Music Centre at 155 Thames St. that was in St. Andrew’s Church but the program outgrew the facility. There will be an open house at the new location this month. 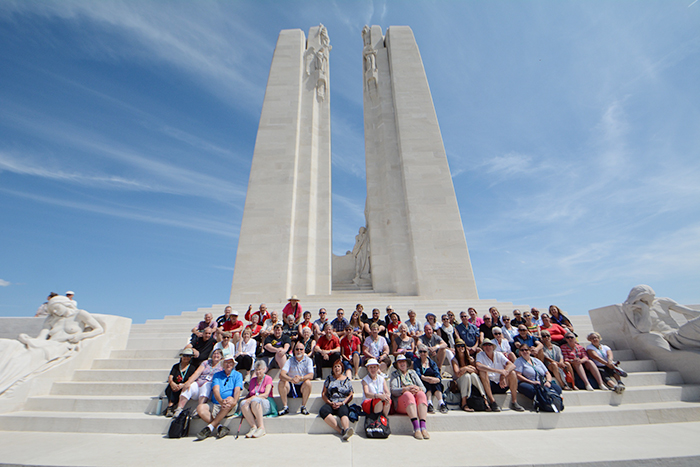 « WAMBO organizers can’t wait for No. 30 Peace and tranquility »