Staying in shape for the hockey season

Jul 25 • Feature Story, Local Sports • No Comments on Staying in shape for the hockey season 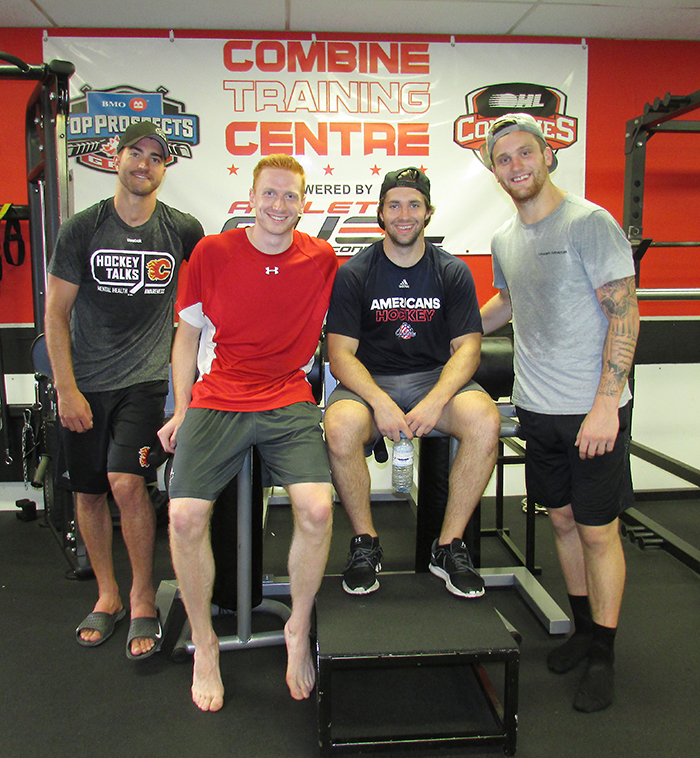 T.J. Brodie, Joseph Raaymakers, Seth Griffith and Dane Fox cool down after a tough workout Friday at Athletes’ Fuel Strength and Conditioning at Erickson Arena. The hockey players are training with the organization in preparation for their fast-approaching respective hockey seasons here and in Europe.

The four are part of a core group of athletes who have been working out daily with Athletes’ Fuel Strength and Conditioning (AF) at Erickson Arena in Chatham.

Brodie, 28, a defenceman with the NHL’s Calgary Flames, has only been involved with the off-ice element of the program for a couple of weeks.

Raaymakers, the youngest of the bunch at age 20, has actually been at AF the longest.

Meanwhile, Griffith, 25, a centre with the Buffalo Sabres, and Fox, 24, who spends his winters as a centre for the Thomas Sabo Ice Tigers of the Deutsche Eishockey Liga in Germany, have been part of AF for the past three years.

All appreciate the opportunity to gather to work out in their home municipality.

“It is nice when we can all work out together,” Griffith said.

“And it’s always nice to come back and spend some time with family and friends,” Brodie added.

“They’re here for two hours a day, five days a week. Wednesday is an active recovery day,” he said. “The other days are pretty gruelling two-hour workouts.”

The recharge days may not involve a typical workout, but there’s no shortage of sweating when the AF participants get together midweek.

“We play games and just go play for one and a half to two hours to stay loose,” Roeszler said.

That could involve spike ball, basketball, tennis, ultimate Frisbee – “any sport they feel like playing.”

Last week, that sport was volleyball, played at one of the beach volleyball courts at the Portuguese Canadian Social Club of Chatham. Instead of spending the morning pushing weight sleds around, they worked up a sweat in the sand.

“The volleyball was a nice change. It didn’t feel like a workout,” Brodie said.

Roeszler said the AF crew really enjoyed the time on the sandy court.

“It might have been their favourite day they had yet. Hopefully we can get back there again,” he said.

The rest of the week, mornings consist of an overall workout, including sprints, jumps, weight lifting and conditioning, Griffith said.

Roeszler said athletes have to work hard to maintain their peak physical condition, or make gains.

Brodie said professional hockey players stay in top physical condition year round, but they do have to take a break now and again. He said he took the first month after the season off to rest and recuperate from the heavy grind of an NHL season.

With summer half over, the players know the focus on hockey will ramp up shortly.

For Fox, he’ll board a plane this week to return to Germany.

“They get us over there a month early for camp,” he said of the Ice Tigers.

As for the others, they’ll continue to train with AF, and will take to the ice against one another in the near future as part of the Athletes’ Fuel Cup. Three teams of 15 players – all of which will include a mix of pro, junior and minor hockey players – will play against one another starting at the end of the month at Thames Campus Arena.

Roeszler said the quest for the cup is an excellent chance for the minor hockey players to learn from the pros on the ice. He also hopes they learn each day in the gym and follow the effort the pro players put in day in and day out.

“They get to see what these pros have to do every day. It’s a learning experience for them,” he said.

As for running the training for the players, Roeszler said it’s a treat.

“This is my favourite part of the year. They’re guys who are extremely athletic. Training isn’t always fun, but they make it fun,” he said. “They are funny guys who are just fun to be around. It doesn’t feel like work working with those guys.”

“We started small and it’s slowly gained weight over the past five or six years,” he said, adding the target has been to work with talented teenaged players, right up to the professional level.

“That’s always why I wanted to do it. I wanted to work with guys at those levels,” he explained.

Raaymakers, who last season minded the net for the OHL’s London Knights, was one of Roeszler’s first clients, arriving as a Major Bantam.

“You get a guy like T.J. Brodie or Seth Griffith and they’re already pros, but you get a real appreciation with a kid who starts with Major Bantam and he stays with you through junior and hopefully the pros,” he said of Raaymakers. “That’s the reward.”