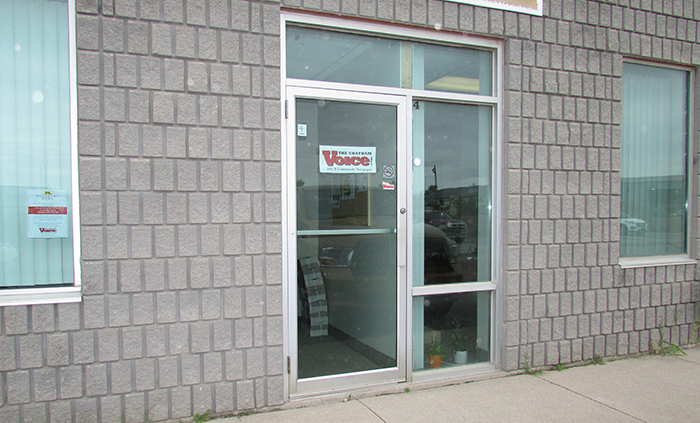 I learned something last week when we moved our new location to 71 Sass Rd.: The kindness and support of Chatham-Kent people and businesses massively trump Murphy’s Law.

If you don’t know, Murphy’s Law is if something can go wrong, it will. That happened to us in numerous ways last week, but the support system we experienced was incredible.

For starters, our Internet was to be switched over to the new office on Thursday. A contracted tech came out to the location, took a look at what was needed, and calmly said he couldn’t do it.

That was one day before our scheduled move.

What’s worse, he said it would be a week or two before the people who could do the work required – running cable to our unit, along the roof and from the pole at the roadway – would be available.

I received this news as I was on Talbot Trail delivering newspapers and seeing clients. I rushed back to the office and placed a call into Cogeco, our provider, and called the regional business accounts guy.

I tried not to shoot the messengers, but expressed my anger at the situation. We had Mike, a Cogeco tech, stop by the new building in early May. He said the install wouldn’t be a problem, and put in the work order.

In late May, with the lease finalized, I called Cogeco to book the install, explaining the cable would be coming from the pole at the roadside.

And then the contracted guy shows up and says he can’t do it. Grrr.

We are a communications business. By not having Internet, our phones, email, access to our website, you name it, would be down. In short, we wouldn’t be able to communicate, and that would include sending files to our printing company.

The folks at Canquest, the people whose service we utilize for our phones, offered an immediate temporary fix. They said they could loan us an LTE hub, where our phones and Internet would be connected via LTE. Since it would run on a cellular network, such usage would quickly add up.

I let the Cogeco folks know I’d be charging every penny to them.

In the meantime, those Cogeco messengers were hard at work getting our needs expedited.

By late afternoon Thursday, I was told somebody would be there between noon and 4 p.m. the next day to connect us.

Early the next morning, as I pulled into the office, Jim from Wire-Tel, the gentleman who was handling the move of all our phone and Ethernet connections, was waiting to get to work. It turns out he knows Mike from Cogeco. A quick call confirmed Mike was doing the cable install at the new place. We didn’t have a four-hour window in the afternoon. He told us he’d be there between 10 and 10:15 a.m.

The local Cogeco folks are top notch, and Mike is a consummate professional.

Meanwhile, with that big problem taken care of, I figured we were home free.

Our firewall system wouldn’t turn on. No firewall, no Internet, no telephone.

I took it over to MicroAge where we got it. Turns out it’s two years into its three-year warranty. No charge for a replacement.

The only problem is one had to be ordered. Dan, one of the MicroAge wizards, got to work getting us a temporary replacement, and did what he could at his desk to get the unit programmed.

Jim installed it, but we kept having issues, so Dan, late on a Friday afternoon, on a day where they were short-staffed to begin with, came out to the office to work with Jim to sort through the issues.

Knock on wood, but everything stabilized. We had phones and Internet!

A huge thanks to Jim from Wire-Tel for his patience on Friday, to Dan (who is also a dance dad) from MicroAge for helping to get us up and running, and to Todd and the crew at Canquest for having our backs if the cable install fell through.

I must also thank Dennis from the Hot Tub Men, our new neighbours here, for his support as well. He offered to let us piggyback off his Wi-Fi if needed.

The local support began before moving day. I cannot thank Ed Coke from Maple City Business Solutions enough for loaning us a cube van. I crossed paths with Ed on election night. He asked when we were moving and if there was anything he could do to help. Our printer/copier is leased from his business, so he offered to have his guys move it for us.

Then he did one better, offering the cube van, complete with a lift gate, for the day. Wow. I was going to rent a cube van, but this was perfect!

Combined with a flatbed trailer courtesy of Unicorn Jay – the partner of our very own Michelle – and the help of a couple of young lads, we had the old office pretty much packed up in in two hours.

Everything was unloaded at the new place in another 90 minutes. I had the cube van back to Maple City by 1:30 p.m. Maple City Business and MicroAge share building space, so it was especially convenient to one-stop drop – the van and the firewall – on a hectic day.

Through all this, our staff were amazing. Many hands make light work. Everyone showed up Friday ready to move equipment and desks.

And then there was Judy. She helps with delivery of our papers to North Kent, Wallaceburg and Dresden every week, and is a friend.

She showed up Thursday to help, packing up our kitchen and cleaning up the area, and returned Friday to help move, and to set up our new kitchen area.

She quietly got water for our water cooler and acquired additional items for the new office kitchen area as well – things we would need in short order but wouldn’t have thought about until they were needed immediately.

Such foresight and effort was truly appreciated, more so considering the impact Murphy’s Law was trying to have on our move.

Lastly, I must thank Joe Comiskey, who was our landlord for our first five years of operations. What a great guy. If a problem developed, it was handled quickly.

Joe would also periodically stop in to check on the building, inside and out, and would invariably strike up a conversation with whomever was in the office.

The only reason we moved the office was to bring the warehousing side of our operation – the insertion and bundling of our papers – under the same roof as our front office.

So, we’re in our new location. By late Friday, it looked as much like an office as our old location did.

We still have a few boxes to unpack and tables to build for the new warehouse, but hopefully, the big hiccups are all out of the way.