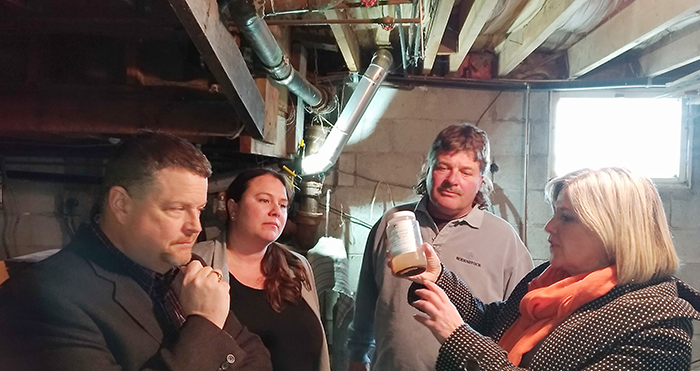 Just days after information on how deep pile driving methods could impact adjacent water wells was discovered in a company blog, the Hydro One consulting firm pulled down the info from its website.

Brought to the public’s attention by Essex MPP Taras Natyshak, the blog on the EBS Geostructural website referenced the North Kent One wind turbine project in North Chatham and the recommendation to use a micro-piling method of construction for the turbine foundation instead of the deep piling method.

“The potential for driven pile installation to cause issues with nearby active water wells” was given as the first point as to why the company recommended to use the micro pile (drilled) method instead of the deep pile (hammer) method to anchor the foundation.

That sentence was removed from the company blog, causing members of Water Wells First and Natyshak to question why the only reference to potential impact to water wells was removed and who ordered it done.

“It has Erin Brokovich written all over it,” Natyshak said in a phone interview with The Chatham Voice. “It’s the old ‘cover up is worse than the crime’ adage. In this day and age, would they not realize we would screen capture the initial report? Of course we did; we have several copies.”

After reaching out to EBS officials via e-mail, the company marketing director responded quickly, saying the statement was removed from their site, as it wasn’t being used “correctly.”

“We’d like to clarify any confusion that our Chatham-Kent blog post has caused,” Stephanie Aires said in an e-mail. “Our blog posts are for promotional purposes only, and are not intended as reports. Some blog statements are job specific, while others are general statements about the services and technologies we offer.

“EBS Geostructural Inc. has chosen to remove specific statements from the Chatham-Kent blog as they were being used incorrectly. EBS chose to remove the statement on our own accord and were not asked by anyone to remove or alter it. We apologize for the misunderstanding that our promotional blog caused.”

Natyshak found the fact only the sentence referring to water wells was removed “interesting” and wants answers.

“It does raise a whole host of other questions. Who ordered that to EBS Geostructural? Who pressured them to remove that phrase from their website?” Natyshak said. “Ultimately, we know the issue here is liability, when we get down to brass tacks. The minute they assume liability and responsibility for contaminating these wells, the numbers start to escalate in regards to what the recourse is and what reparation looks like.”

The Essex MPP added that there are several options for recourse open to the wind farm company and the government.

“Does it look like bringing out municipal water to those homes – how much will that cost and who pays for it? There’s shutting down those lines until the aquifer returns to normal and those folks can have access to the water they had previous. Does it look like massive ongoing maintenance for home filtration systems for these residents and the costs associated with that? Or the fourth option is shutting them down completely in perpetuity,” he questioned.

One thing the member from Essex is sure of is that he will not be letting up on his questions to the premier.

“We are going to continue to push this issue in the legislature before we enter the election and after. I’m not giving up on these people until there is a solution found. There is no way in Ontario in 2018 that residents in our province shouldn’t have access to clean and safe drinking water – not a chance; not under my watch,” Natyshak said.

The MPP said he wishes he got involved earlier in the issue but didn’t want to step into a neighbouring riding.

“I just wish I could have gotten on it sooner because it’s just devastating. There’s no way this should be happening. This area means a lot to me. I’ve fished and duck hunted in that area my whole life and it’s quintessential southwestern Ontario and Lake St. Clair shoreline and farmland. To make it unlivable and uninhabitable; no way, no chance. Not on my watch,” he added.

While Ontario NDP leader Andrea Horwath was in Chatham-Kent on Wednesday, Natyshak said she took time out to visit the farm of Dave Lusk, an affected well owner, and Theresa Pumphrey to see first hand what they are dealing with.

“What I saw yesterday was outrageous,” said Horwath in a release. “Dave and his family have lived on that farm for generations and never had an issue with water quality before the pile driving began nearby. These families deserve for their government to take this seriously – Kathleen Wynne needs to direct her ministry of health to complete a health hazard investigation at the contaminated wells immediately.”

Samsung and Pattern Energy had provided the affected families with a temporary water source, but the tanks are now slowly being removed from affected farms. Lusk told Horwath that he has purchased a new water tank at a cost of more than $1,200. In addition to the cost of the tank, he expects to pay another $400 to hook it up to the plumbing system in his home and $60 every two weeks to keep the tank full.

“What used to cost Dave $10 per month will now cost him $120 per month, just so he can have drinkable water at home,” said Horwath. “That’s no way for people to live. It’s ludicrous that Kathleen Wynne is allowing these families to go without safe drinking water.”

Residents have had the black water collected and analyzed by scientific experts who have found the water contains Black Shale sediment. Black Shale is a known environmental hazard because it contains heavy metals which can be released into a person’s body if the water is ingested. Some farmers have reported that they are so reluctant to use this contaminated water that they are feeding their livestock bottled water instead.

« Crime of the week Attempted assault with a metal bar »