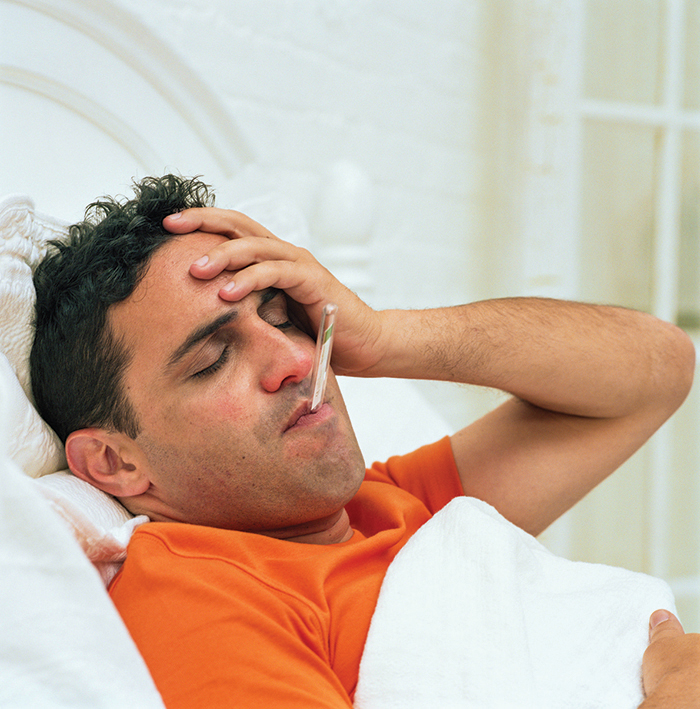 As some of you know, I work in an office full of women; really, really great women.

So I pity them for the next week or so.

You see, I have come down with a man cold.

You know, the illness that can leave men moaning and groaning, coughing loudly, and retreating to infant-like status in the whining department. That Nyquil commercial where the guy lies in bed calling his wife’s name and then asks her to call her mom sums it up wonderfully.

Yes, I’m talking about the same colds that women seemingly shake off and go about their days without a second thought.

What is it with guys and colds? We too often seem to behave as if our world is coming to an end when we get sick.

And I like to think I fare pretty well with colds. I usually don’t miss any time at work (why do I think the folks in the office wish I would stay away?), and soldier through. But colds do take their toll on me.

For the women out there who laugh at their husbands, boyfriends, brothers, fathers and male buddies who appear to go into the fetus position when the cold virus strikes, there is some truth to we men suffering differently than you ladies. It might just be physiology as opposed to psychology. Honest.

Medical reports indicate estrogen can slow down the rate at which a virus multiplies. In other words, while we men go from well to sick like a sports car goes from zero to 60, women may do so at a more leisurely pace.

When they are up to speed in terms of a full-blown cold, women seem to adapt with the increase in symptoms. Meanwhile, many men are have wrapped that proverbial sports car around a telephone pole, are curled up on the couch, box of tissues nearby, barely able to watch the hockey game on the tube.

At the same time, their equally ill significant other is cleaning up around them, helping the kids with their homework and keeping the house in order.

Women are the ones who go through the pain and miracle of childbirth. You give life! You are hardwired to overcome physical discomfort, so perhaps that helps in the battle with the common cold.

Or perhaps, we men are just babies when we get ill.

I will say this, and I’m likely about to curse myself as a result, but this is the first cold I’ve been hit with over the winter. Sure, I’ve been run down at times, but not the full-on sore throat, stuffy nose, incessant coughing, feel-like-crud that has hit me this week. Others in the office aren’t so fortunate.

Thankfully, I get my flu shot annually too.

One thing I’ve learned over the years is to watch how much cold medication I take. For instance, I can’t take two of the non-drowsy pills at a time and accomplish much at work. They make me loopy. My pupils get dilated, fluorescent lights seem overly bright and I can’t concentrate on much.

Do you think the man-cold is all in a guy’s head (and I’m not talking stuffed up sinuses)? How bad is it at your house? Let me know at bruce@chathamvoice.com.

My kid goes to Ursuline College Chatham. Lately, I’ve been driving her most mornings and dropping her off at the front door (if there is a front door at that jigsaw puzzle of a school). I’m not alone, as many other parents do so as well.

So many people use that main entrance as the drop-off point that the exit has a sign telling drivers that they aren’t to make a left turn out onto Grand Avenue.

It appears a lot of UCC parents believe the sign doesn’t apply to them.

There’s a reason the school has that sign. Grand Avenue is a busy street, and turning left there can be a challenge. Heck, the municipality only allows right-hand turns on Ursuline Avenue at Grand Avenue just east of the school.

Driving the girl to school on Monday, I saw three vehicles in a row pull out of there and hang a left. It cleared a logjam of vehicles, as these three probably could have turned right much earlier and kept things moving.

But, alas, this is Chatham-Kent, home of the selfish driver, where rules of the road apply to everyone else, right?

I neglected to notice if any/all pulled a Chatham Left (turning left on a four-lane road and immediately going into the right lane) in the process.

Speaking of Chatham Lefts, I admit I’m guilty of them from time to time. No, this isn’t a case of “when in Rome,” but instead it’s usually when someone heading in the opposite direction decides to go through the late stages of a yellow light, and I turn into the right lane behind them in an effort to clear the intersection sooner because the light will now be changing while I’m still out in traffic.